We need your help TODAY to re-elect a local Green 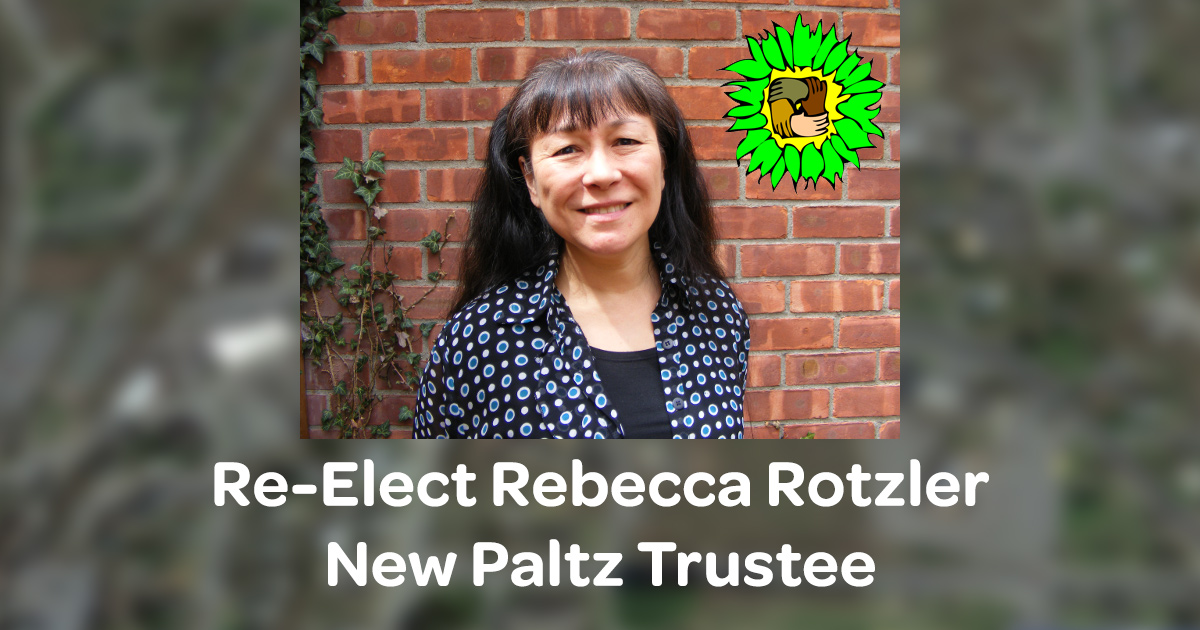 We need to tell you about Rebecca Rotzler, who currently serves as Deputy Mayor of the Village of New Paltz, NY and is seeking reelection tomorrow on May 2nd.

In her first term, Rebecca started an Affordable Housing Committee, which drafted a much more fair Affordable Housing Law for the community; Rebecca also instituted a procurement policy where textile purchases made by the Village government must be union and American made.

The current village board entrusted Rebecca to lead a 65 acre project known as the Millbrook Preserve, where she has already struck down a real estate developer's attempt to buy off a tract that is crucial to local wetlands. If Rebecca is not reelected, an important well-water drilling project may be compromised, threatening the long-term health and sustainability of the community.

As one of our elected local Greens, Rebecca is a target for the duopoly corporate parties. Will you please give to her campaign TODAY to support her final push to get out the vote and remain a force for Green Party values in her community?

Rebecca has served as a national co-chair of the Green Party and a representative of her region for GPNY. In 2004, she assisted then-Mayor Jason West in marrying same-sex couples in New Paltz, becoming the first jurisdiction on the East Coast to do so in a nationally-celebrated act of civil disobedience.

As a community volunteer, Rebecca led work crews helping families whose homes had been devastated by Hurricane Irene and Hurricane Sandy. She spent every Sunday for four months on Staten Island rebuilding, and providing mold remediation, demolition, moral support and legal help.

Please donate online now to Rebecca's campaign so that she can continue making history in New Paltz as a representative of the Green Party. Every little bit helps in a local election that could come down to the last vote!

The Green Party of New York asks for your support in re-electing Rebecca Rotzler!

p.s. The more Greens we have doing great work in elected offices, the better we will be able to win seats in villages, towns and cities like yours! Donate to Rebecca's campaign today.