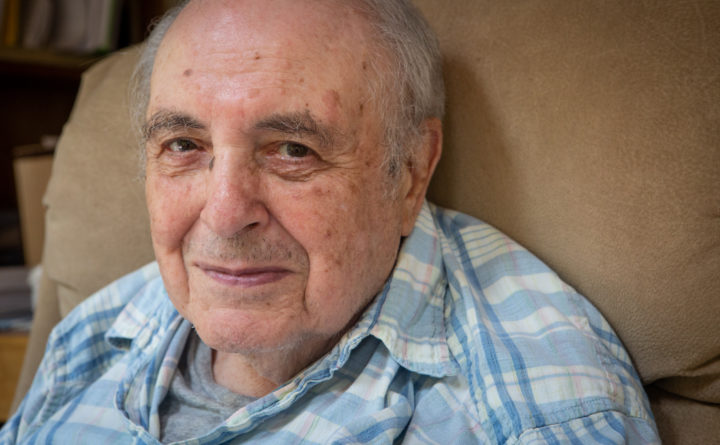 WASHINGTON, D.C. – Herschel Sternlieb died in Washington, D.C., on June 14, 2021. He was 93. He was born on Sept. 5, 1927 in Norwich, Conn., to Joseph and Rose (Schleifer) Sternlieb. His parents were first generation Americans from Eastern Europe. The Sternliebs had a clothing business and owned real estate, but by 1932, lost everything in the Depression.

From 1934-1939, he lived on a farm in Moodus, Conn., with his Yiddish-speaking grandparents, who owned a kosher summer hotel for city-dwellers. Everyone helped with the running of the hotel; his chores were chopping wood, shucking corn, and plucking chickens.

In 1939 the family moved to Boston, where he attended Boston English High School. There, he held the Massachusetts and New England titles for fastest runner in the 220 yard and relay events. He attended Boston College on a track scholarship before being drafted into the US Army in 1945, soon after VJ day. After basic training in Fort McLellan, AL, he served in the Philippines in the Criminal Investigation Division in Manila, where he contracted malaria, which ended his track career.

His experiences before the war and in the army made him a life-long peace advocate. He graduated from Lowell Textile Institute (now UMass Lowell) in 1951 with a degree in synthetic textile manufacturing, and began a long career as a textile executive, entrepreneur, and inventor. He met his wife Selma (Smith) in Boston, they married in 1960, and raised their three children in Andover, Mass.

Hersch owned Huntington Products, a commercial silk screen printing business in Lawrence where he supplied the drapes for the Howard Johnson hotel chain and the US Senate. In 1976 he was hired to turn around the W.S. Libbey Co. in Lewiston, one of the last large textile mills in the state, and the family moved to Brunswick in 1978.

Over the course of his career, Herschel received over 20 textile related patents including for interspun hydroentanglement.

For eight years, Hersch spearheaded the (unsuccessful) effort to transition the Brunswick Naval Air Station into the Brunswick Park and Gardens. It was, he said, his true passion: turning swords into ploughshares. Hersch loved to write and contributed many columns and satirical political pieces to The Times Record.

For over 25 years he wrote a weekly political fable that he sent to some 200 friends, family members, and admirers, eventually compiling over 1,300 – some of which were included in his book, The Adventures of King Bushy Tushy. He wrote and illustrated over 30 children’s books for his five grandchildren and wrote 30 one-act morality plays and allegories.

He was also an avid creator of double crostics. His pithy five-point guide to living a good life is quintessential Hersch in its clarity, simplicity, and kindness: • Stay liquid. • Live upstream. • Be good to the help. • Don’t bark back at dogs. • Put yourself in good hands.

Hersch enjoyed building things. Over seven summers he and his son built an A-frame house in Parsonsfield, ME using only hand tools. He crafted 3 elaborate dollhouses for his granddaughters, along with gliders, tables, cabinets, chests, and a cradle.

An avid reader, particularly of history, he had an encyclopedic memory and could recall details of ancient history as well as hundreds of jokes with which he regaled friends and family. He donated his considerable library to the So. Maine Community College at Brunswick Landing.

Hersch was a dedicated advocate for peace, non-violence, and the environment. He was a member of Maine Veterans for Peace and the first registered Green Party member in Brunswick. His beloved wife of 58 years, Selma, a passionate peace activist, died in 2018. She and Herschel hosted many meetings in their home over their 40 years in Brunswick.

One friend said “Their home was the center of discussions, parties, and activism, for a loving and engaged community of people seeking ways to create a more peaceful world.”

Besides his wife, he is predeceased by his sisters, Lois Mezer and Marian Blum. He leaves behind his children: Joseph (and Linda Singer) of Washington, D.C., Lisa (and Jonathan Marks) of State College, Pa., Janine (and Spencer Sherman) of Sebastopol, Calif., and five grandchildren. At his request, in lieu of flowers, contributions may be sent to the peace organization of your choice.