History is Made at the State Board of Elections: The Green Party is Officially on the Ballot 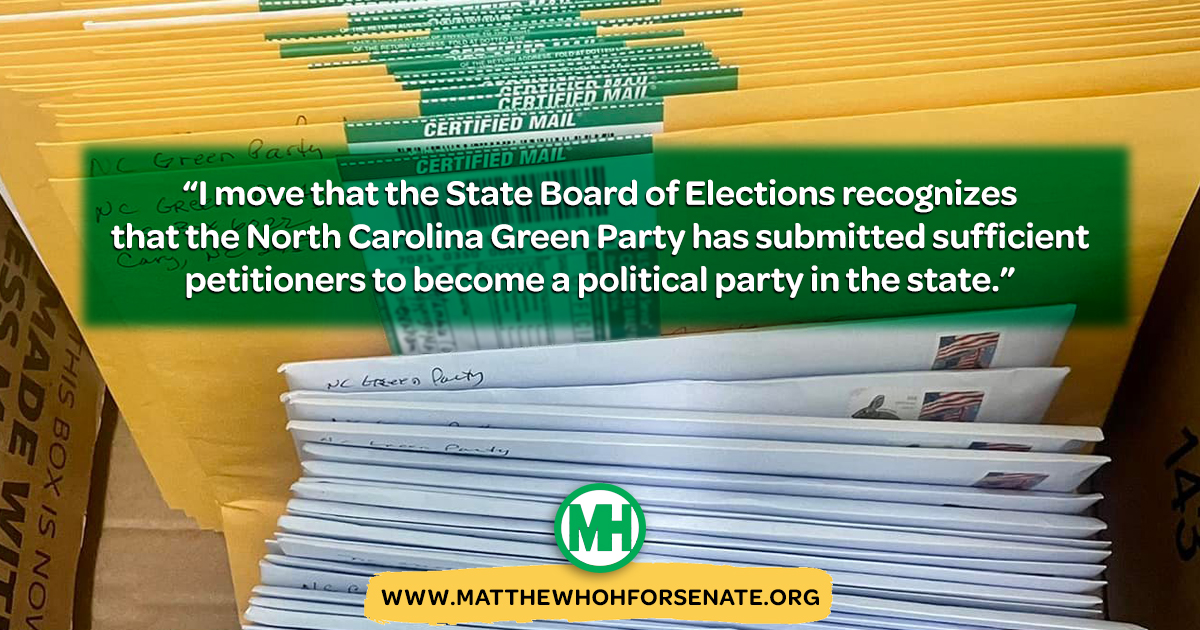 Today, county and state investigations proved the Green Party’s petition to be recognised as a North Carolina political party was lawful. Board of Elections investigators submitted their findings before the State Board of Elections, asserting that wild accusations of rampant fraud were not, in fact, true. The Green Party needed 13,865 verified signatures of NC voters, and as of Aug 1, 2022, 15,472 signatures were both reviewed and validated by county boards and the state.

Green Party candidate Matthew Hoh states, "Today's unanimous decision by the North Carolina State Board of Elections (NSCBE) to certify the North Carolina Green Party vindicates our efforts, over partisan opposition, to be able to run in this November's elections. I am excited to fulfill the remaining requirements to be placed on November's ballot and to give voters in North Carolina an option that truly represents working families and not the status quo."

The State Board of Elections ruling today stands in stark contrast to a decision made only one month ago when the NC State Board of Elections voted along partisan lines, 3-2 against certifying the Greens’ ballot access petition. Extensive and painstaking investigations found no evidence of Green Party wrongdoing. Hoh’s attorney Oliver Hall adds “NCSBE confirmed today what my clients have said all along: there was never any basis to deny certification of the North Carolina Green Party. By certifying the party today, NCSBE did what it should have done two months ago.”

But in the last month, another scheme surfaced, and the public learned about a massive voter intimidation campaign targeting NC residents to pressure them to request their names be removed from the petition. In recordings and eyewitness accounts provided to the Green Party and the media, Democratic Party operatives falsely claimed to be representing the Green Party, and even the Board of Elections, as they bombarded petition signers with deceptive claims.

Thankfully, the will of the people prevailed, and so, democracy can claim a victory today. Campaign Manager Rose Roby adds, “Next stop, Green Party candidate Matthew Hoh for US Senate on the November ballot.”

US Senate candidate Matthew Hoh, a disabled Marine combat veteran, has demonstrated time and time again that he will never back down from a fight for our democracy. Now voters have another option when they go to the ballots in November. Hoh states, “North Carolina voters will have a choice to vote for a candidate for US Senate who believes in single payer health care, affordable housing, an annually adjusted minimum wage that is a living wage, an end to the war on drugs, real action on climate change and other issues that are ignored or paid lip service to by the Democrats and Republicans. Working families will now have someone in the US Senate race who champions their needs and not those of corporate donors.”