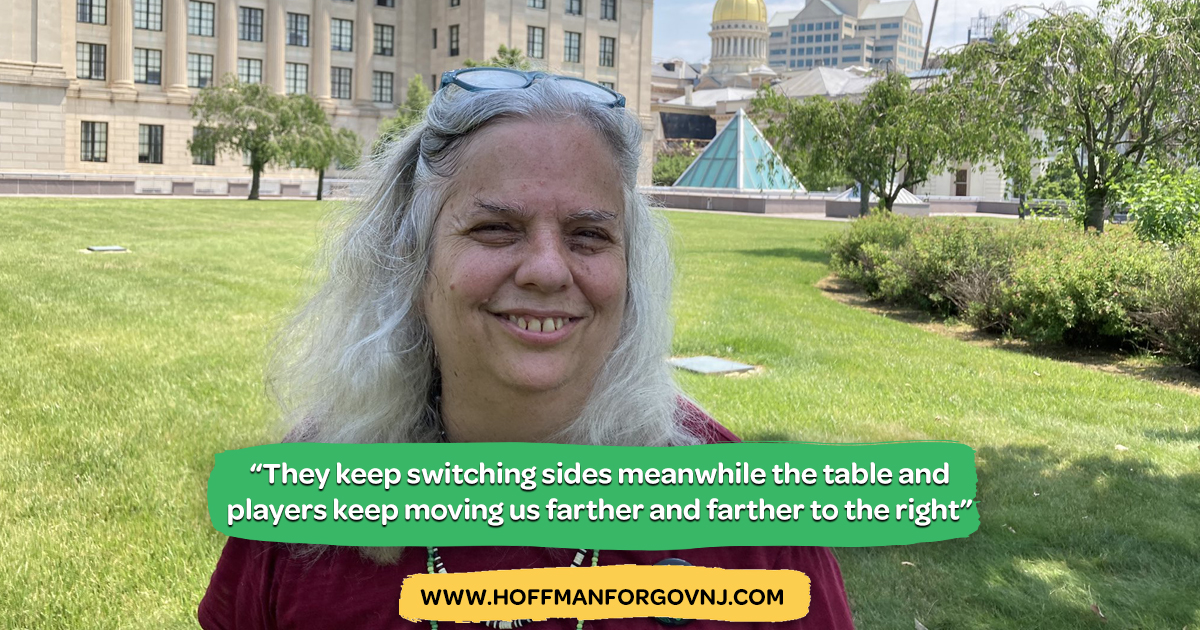 Veteran activist Madelyn Hoffman has led the anti-war wars for years in this state. If you've watched the United States bomb its way into a foreign engagement, and you've been on the streets, you've inevitably seen Hoffman with a bullhorn in hand, fighting back as the country subsequently sinks into an overseas quagmire.

The Green Party stalwart has run multiple statewide campaigns, including a previous crack at governor back in 1997, and back-to-back goes at a senate seat against Bob Menendez in 2018 and then Cory Booker in 2020, when she received 0.9 percent of the vote behind Booker's winning 57.4% and Republican challenger Rk Mehta's 40.9%.

Her critics liken the effort to that other area Green-attired Myth of Sisyphus: the New York Jets.

But Hoffman refuses to back down.

She's the New Jersey Green Party candidate for governor again, somewhat ironically in the same year the United States dismally extracted troops from Afghanistan. Hoffman was there at the beginning, pleading with the United States Congress in 2002 to prevent the Bush Administration from expanding the war in the Middle East and invading Iraq. Now she's organized around the domestic front, which has flailed in the two decades that American grunts and its mercenary forces have bogged down the country. In New Jersey, large areas of many of the state's cities look precisely like the ravages of those Third World battle-zones Hoffman tried to prevent.

No one gives the Green a chance this year as Democratic Governor Phil Murphy and his Republican challenger Jack Ciattarelli wage one of the most negative, anti-ideas contests in recent memory, the level of debate reduced to who can more convincingly tear his teeth into a slice of pizza.

In that dreadful cacophony, Hoffman showed up on Saturday to a grassroots action to protect Liberty State Park, where local legend Sam Pesin noted the inexplicable 11th awarding of a permit by Murphy's state Department of Environmental Protection (DEP) to a group that wants to Astro-turf pave a significant portion of the New Jersey gem.

Maybe the two-party candidates can throw a pizza party on that shiny new turf.

For Hoffman's part, "I hope I can earn your vote," she said. "I hope you will give us a chance to earn your vote. I have been to many corners of the state and the problems are real."

Since her last gubernatorial campaign, Governor Chris Christie was the worst statewide leader, in her opinion. "Hands down," she said. "Just the double standards, the hypocrisy, the bullying, the lack of respect for teachers and then Bridgegate, from which he somehow emerged unscathed."

One might think Murphy has done enough on the progressive front to get Hoffman to stand down this year.

After all, he secured a millionaire's tax, marijuana legalization, driver's licenses for noncitizens, a path to a $15 minimum wage by the middle of the decade, and stared down the Trumpies here with a credible, mask and vaccine-centric pandemic response.

So where did he go wrong?

Not going far enough, according to Hoffman, who said she would raise from 10.5 to 11 percent more in her budget with a tougher demand from corporations and those in the upper income bracket.

The Green Party candidate wants an increased tax not just on millionaires, but on New Jerseyans making 700K and up.

"Yes, it was a good thing but we need to generate more revenue in this state," Hoffman said. "We saw no increase in the corporate tax."

It also didn't go far enough, with significant remaining problems in the areas of expungement and home grown grass.

As for the path to a $15 minimum wage, Hoffman said it's too incremental.

"We can't make it about Trump and Biden forever," Hoffman said. "I wasn't planning for governor but I felt it was important to do it. It's ping-pong politics. They keep switching sides meanwhile the table and players keep moving us farther and farther to the right."

She also, as ever, would like to see rank choice voting implemented in New Jersey.