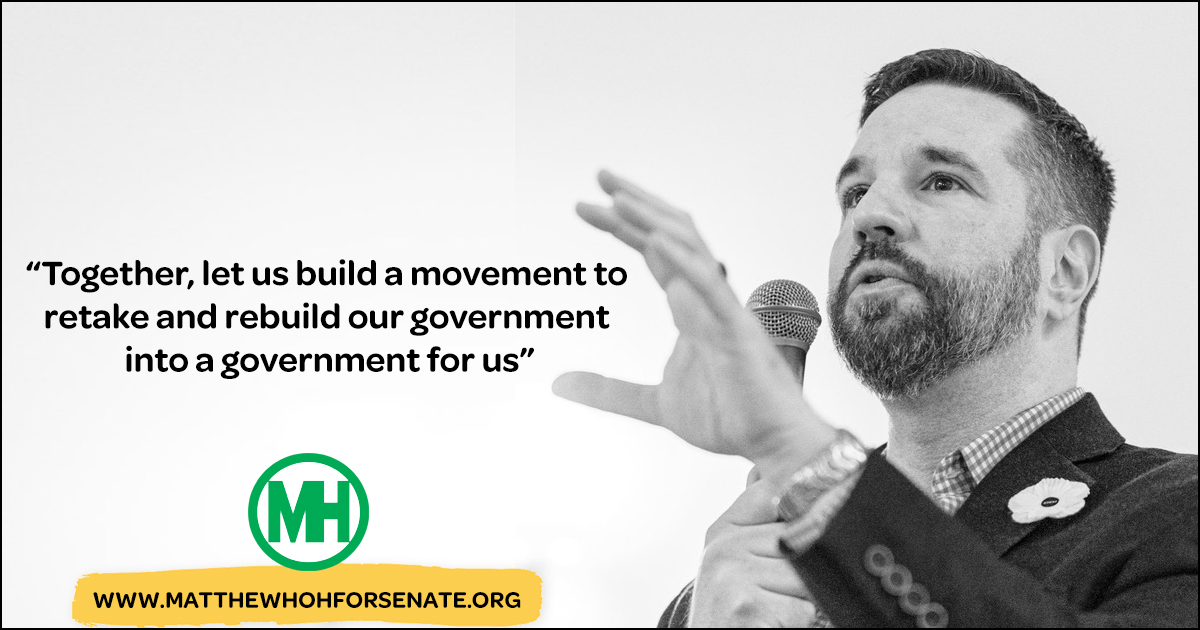 The North Carolina Green Party is proud to announce our first-ever candidate for nomination for the US Senate, Matthew Hoh. A Wake Forest, NC resident, Matthew is a dues-paying member of the NCGP and has been enthusiastically endorsed by the party membership by consensus.

Matthew shares his reasons for running on his campaign site:

For much of my life, North Carolina has been my home. It is a place that has welcomed and supported me, where my family lives, and a place where I was able to rebuild my life after the wars.

I spent ten years in the Marine Corps and went to war three times before realizing the courage to stand against those unjust, immoral, and counterproductive wars. Since 2009, I have fought not only against the war machine but also against the systemic political and financial rot that underlies and connects our problems in North Carolina, the United States, and beyond. It’s not just the overseas wars that have stolen futures from our country and others – it’s also the wars against the working class, the continued racial injustices, the War on Drugs, the criminal for-profit healthcare system, our unsustainable housing crisis, and so many other inequalities, injustices, and inequities that not only stifle individuals and families, but diminish and hold back entire neighborhoods, communities, municipalities, and our entire country.

In 2009, Matthew resigned in protest from his post in Afghanistan with the State Department over the American escalation of the war. In 2010, Matthew was named the Ridenhour Prize Recipient for Truth Telling. Matthew’s writings have appeared in online and print periodicals such as the Atlanta Journal Constitution, CounterPunch,Defense News, the Guardian, the Huffington Post, Mother Jones, the Raleigh News & Observer, Charlotte Observer, USA Today, the Wall Street Journal, and theWashington Post. He has been a guest on hundreds of news programs on radio and television networks including the BBC, CBS, CNN, C-SPAN, Fox, NBC, MSNBC, NPR, and Pacifica. The Council on Foreign Relations has cited Matthew’s resignation letter from his post in Afghanistan as an Essential Document.

For strong potential candidates like Matthew to get on the ballot in North Carolina in 2022 and beyond, the North Carolina Green Party must collect at least 14,000 approved signatures on a petition by early May. Matthew Hoh’s campaign will be strongly committed to getting on the ballot. However, Matthew cannot accomplish this goal without your help. Please visit the NCGP petition site to sign up to volunteer and find other resources. Let us know if you need us to send you a petition form!

Here’s a small sample from many excellent interviews, events, and articles featuring Matthew:

You can find more media links such as interviews with Democracy Now! as well as with Krystal Ball and Kyle Kulinski on Matthew’s Senate campaign website, where you can also sign up for more information, donate, and join his campaign team:

Please join me in this campaign to break our political system away from the corrupt two-party system beholden to the wealthy, the banks, and the corporations. I would not be running if this were not necessary and if I did not think it possible to retake, reimagine, and rebuild our political system.