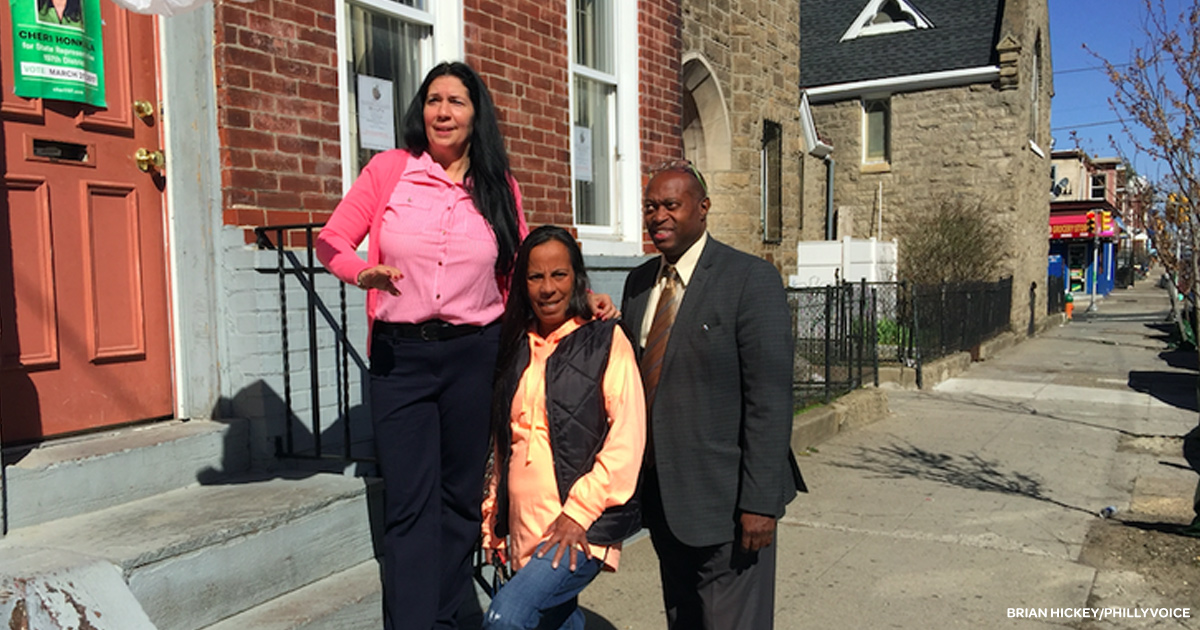 Could a candidate whose name doesn't even appear on the ballot end up winning next week's special election for the 197th district statehouse seat?

Cheri Honkala, a longtime activist in the city, sure thinks she can.

"I am absolutely convinced we'll win," she said Thursday morning in her modest second-floor campaign office near North Sixth and Venango streets. "For people around here, this isn't a normal election. It won't be zombies going to the polls. People have a vested interest, and they know I've been around for 30 years."

While it's impossible to predict the political future – see Trump vs. Clinton, Nov. 8, 2016 – Honkala's exactly right about one thing: This definitely isn't a normal election.

It's so abnormal, in fact, that a win by the Republican candidate – Lucinda Little – would mark the first time in a half century that a Democrat hasn't held the seat. (Fine, she used to be a Democrat, but the 48-year-old clinical research director isn't anymore.)

That's what happens when you're the lone candidate on the ballot in a race that could be won with just a few thousand votes in a North Philadelphia district comprising Feltonville, Hunting Park, Glenwood, Fairhill, North Square and Francisville.

The path leading to a one-candidate ballot is a long and windy one that speaks to the often absurd nature of Philadelphia politics.

We need to revisit that whole mess before we get to what Honkala – running under the "Another Philadelphia is coming" mantra – had to say about what she'll do if elected (though she'd probably change that "if" to "when" if she were writing this).

It started in January when state Rep. Leslie Acosta – who replaced disgraced former state Rep. J.P. Miranda – resigned thanks to a little matter of a federal embezzlement guilty plea.

Her replacement, Frederick Ramirez, got axed from the ballot in late February amid fierce intra-district battling since he apparently didn't live in the district. That decision, coming so late, made it impossible to offer up another replacement – in this case, the Democrats offered up Emilio Vazquez, ward leader and Philadelphia Parking Authority employee – before the deadline.

What that left 197th district voters with is a Republican candidate on the ballot, a Democrat for which the party is apparently mounting a write-in campaign and Honkala, who was Jill Stein's vice presidential running mate for the Green Party in 2012.

If Honkala is to win this convoluted mess of a political campaign – one for which the state Supreme Court agreed that she missed the filing deadline by a day – she would also depend on voters who write her name in on the ballot on March 21.

To be sure, Honkala's activist path touched on many of the district's most pressing needs. In the 1980s, she was heavily involved in the "welfare-rights movement."

"I got my political baptism from mostly African-American women in the south," she said. "During that time, people felt an obligation to have anti-poverty summits, to discuss issues of hunger, to say that homelessness was a bad thing.

"Then came Reaganomics and the (Bill) Clinton administration creating images that welfare recipients were all African-Americans when the majority of people living on the dole were white. They created stereotypes that people who receive any kind of help are driving Cadillacs, drinking alcohol and don't care about anybody else in their neighborhood. We began to push back against those stereotypes."

When she learned that legislators were planning to cut welfare benefits – at a time when she was living on public assistance – Honkala went to Washington, D.C. with an important question: How can you do this without first hearing testimony from those who'd be impacted?

"They said, 'we don't need to have that happen,' so I became the first welfare recipient in the country who threw myself on the table in Congress. I was invited back because I got the attention of the national media," she said. "It's one thing if you pull the rug out and people have jobs. It's another thing if you take away their only way to eat, clothe themselves and take care of their kids.

"So, they pulled out the rug and they convinced the American people – using the history of racism in our country – that everybody living on the dole was African-American. That recipients were living high on the hog with their $316 a month. The myths of 'welfare queens.' Both the Reagan and Clinton administrations ended welfare as we know it. Then, the disaster really began to happen."

Don't get her wrong. Honkala has never been in favor of a "bigger, better welfare check." She said she's all about living-wage jobs.

The disaster that began to happen in the 1990s can still be seen throughout the 197th, said Honkala, who ticked off a list of formidable challenges therein.

The lack of jobs. No recreational offerings for kids. A scarcity of affordable housing. Families doubling and tripling up in the same house or apartment because they can't afford to spread out. A gerrymandered district. People pitting the African-American community against the Latino community "and getting away with it." The overdose epidemic with a body count on par with, if not surpassing, violence.

"The guys in Harrisburg, white Republicans, are enjoying everybody fighting over a piece of bread while they get away with murder," she said. "You can go down to Front and Cambria, walk around the neighborhood and think you're in a third-world country with hundreds of unemployed men living on less than $2 for two weeks yet aren't suppose to participate in selling drugs or crime.

"About a year-and-a-half ago, I got ordained online because mothers that I knew couldn't afford to bury their children anymore. It almost became a crisis having to find a pastor to perform the ceremony to bury their children. The sad thing is, and the thing that makes me the most angry, is that all of this is preventable. This is not Haiti. This is not a question of scarcity. This is a straight-up question of greed, misplaced priorities and a legacy of corruption with political leaders."

'IT DOESN'T HAVE TO BE THIS WAY'

It'd be easy – nay, lazy – to draw parallels to the struggles such communities will face with talk of funding cuts coming from Washington.

Peel a layer back, though, and fears of a Trump administration don't resonate as much in places already steeped in desperation.

"The reason I get so angry is because it doesn't have to be this way," she said.

"I don't want to just paint a picture of doom because I'm going to win this thing. I'm going to make history and transform this community with the help of all the beautiful people who've had barriers put before them for the 30 years I've been in this district," she said. "I got into this race because literally the whole neighborhood came to me and said, 'You gotta run.' I decided to run, but I knew it wasn't going to be easy."

No, it won't be easy, even if her team estimates she could win with as few as some 4,000 write-in votes.

She's working on raising money to fund a special-election day ground game and hoping that being a recognizable name and face will help lead her to victory. She had to make a couple calls to local labor organizations as soon as I left on Thursday to firm up more support for her unconventional campaign.

"Everybody and their mother is scheduled to come out on the 21st. We're knocking on doors even on the freezing, non-global-warming days when (my supporters') hands are going to fall off," she said, noting that they're handing out simplistic "how to write-in a vote" directions.

"We're going to make sure those things happen," she continued. "I've been voting here 30 years, so I understand the legacy of corruption. We intend to have as many eyes on this process as possible."

Around the time that Honkala told me that she's "a different kind of candidate," I mentioned the similarity to the momentum that swept Trump into the White House just months ago. Mobilizing the base. Creating a political environment.

She said that wasn't too far from the truth, but her response included a number of caveats.

She said she plans to live up to campaign promises including "the day after I'm elected, I will drive around – starting with the woman sleeping in the park across the street from my house – picking people up and getting them housing.

"Either we figure out how to get the city to take every woman and child off the street into shelters," she said, "or I'll set up extra rooms in my district office or in Harrisburg for them."

Then, she spun my Trump analogy.

"Here's my analysis: The people wanted Bernie (Sanders). They didn't want Hillary, and (the Democratic Party) shoved Hillary down people's throats, so they got Trump," she said. "I'm praying because I think the people want Cheri, the party wants whoever, and they could lose by getting a Republican in the district.

"I think that people are finally catching on to this idea that it's time for something radically different. I'm encouraged by it."