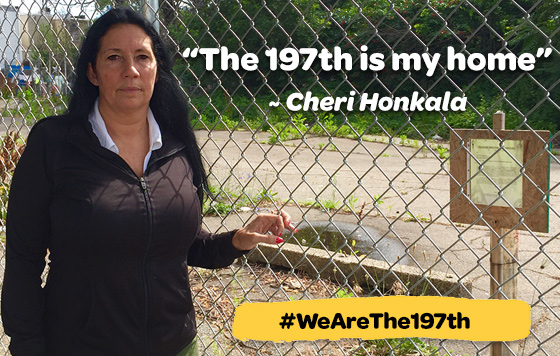 While Freddie Ramirez Was the Heir to a Legacy of Corruption, Honkala is Building a Coalition of Community Leaders Ready to Fight for Our Basic Human Rights.

On Thursday, February 23, Judge Anne Covey removed Freddie Ramirez from the special election ballot for State Representative of the Pennsylvania District 197 in Philadelphia, Pennsylvania. The removal was due to Ramirez not living in the 197th district.

"Some corrupt Democrats thought it could pull a fast one on voters by adding a non-resident onto the ballot," said Edgardo Gonzalez, chairman of Cheri Honkala's campaign. "Meanwhile, Cheri Honkala, a resident with a decades-long reputation for helping people in the 197th, is awaiting word on whether she will be allowed on the Green Party's legally earned ballot line."

Cheri Honkala lives in the 197th District on North Hancock Street, and is a long-time advocate for poor and homeless persons in Philadelphia. For almost 30 years, she has fought and organized for basic human rights. Cheri has led marches and participated in civil disobedience including for quality education, economic equality, fair elections and debates, basic human rights such as food and housing, as well as for protecting our land and water.

"Cheri took care of my children when I was in a coma because of wrongly prescribed pills. She took us into her already cramped apartment when we were homeless. Right now she's parenting three foster kids--brothers who would have otherwise been split up had she not left a campaign meeting to go get them," recalled Liz Ortiz, one of the Honkala campaign's Ground Team Leaders responsible for door-knocking teams. "Compare that compassion with Leslie Acosta, who pled guilty to fraud and kept it secret from us for a year. Compare it with Freddie Ramirez, hand-picked by Leslie, who doesn't even live here and or know these communities yet thought he could use us all--not fight for us."

On February 15, the Commonwealth Court ruled not to accept the Petition for Writ of Mandamus by Cheri Honkala and the Green Party of Pennsylvania to place Honkala on the ballot. While the Green Party of Pennsylvania (GPPA) turned in one paper late, they were explicitly told they had completed all of their paperwork by the Department of State's Bureau of Commissions, Elections, and Legislation. This decision has been appealed to the state Supreme Court by lawyer Samuel Stretton on behalf of GPPA and Cheri Honkala.

"I've been meeting with many community groups, and have had the pleasure of appearing before some Democratic Ward committees. This district is struggling, and they know the same politics-as-usual won't help our neighbors. Even before Freddie was kicked off the ballot, I'm incredibly honored that Ward 19 endorsed my candidacy for the special election. I'm also looking forward to the write-in training that Ward 16 is hosting tomorrow. Over the next four weeks, I'm going to keep knocking on doors and keep meeting with community, labor, or other leaders. We are building a coalition of people with integrity that are interested in fighting for policies in Harrisburg that truly help this community," said Cheri Honkala.

Currently, Honkala is planning a write-in campaign because of the Commonwealth Court's decision last week. "We have already begun write-in training for poll workers and will have these trainings in different wards in the coming weeks. We are distributing literature about Cheri having write-in status, even as we hope for the Pennsylvania Supreme Court to recognize that they are denying the Green Party its legal right as a minor party to a special election ballot line," stated Galen Tyler, campaign manager and Chair of the Green Party of Philadelphia. "Not to mention that they would be upholding a First Amendment violation to voters' right to expression and assembly."

"It looks like the Democratic Party may appeal Freddie's removal, or ask to have another candidate on the ballot. We are sounding the alarm. The Green Party has minor party status. It is legally allowed to have a candidate in special elections. The courts have said so far that because one paper was turned in one day late after officials said everything was in order, Cheri must pursue a write-in campaign," explained Hillary Kane, Treasurer of Honkala's campaign and outgoing Secretary of the Green Party of Pennsylvania.

"Let's all be very clear. If Freddie is allowed to stay on the ballot upon appeal or the Democrats are allowed to replace Freddie, our courts will be saying that there are no consequences that the Democratic Party followed the lead of the corrupt, former legislator Acosta by selecting Ramirez, her hand-picked choice. The courts would be saying that Democrats can pick someone who does not even live in the district and he can either stay on the ballot or easily be replaced. But the Green Party? No. We can tell you all your papers are in, not care that you got us that single paper within 24 hours of realizing it was missing, and then kick your candidate who has fought alongside her neighbors for 30 years off the ballot," said Gonzales.

"We will see what our democracy looks like by how the Pennsylvania Supreme Court decides these appeals. Either way, the people of the 197th are not going to fall for the corruption and shenanigans of politics-as-usual on March 21st." Honkala concluded. "We have an opportunity to stand together and fight for basic human rights like food and housing, clean water, quality education, and sanctuary for our neighbors. We are building the #WeAreThe197 coalition that will keep growing through and beyond Election Day. Everyone with the integrity to be serious about fighting for our community's needs, join us."