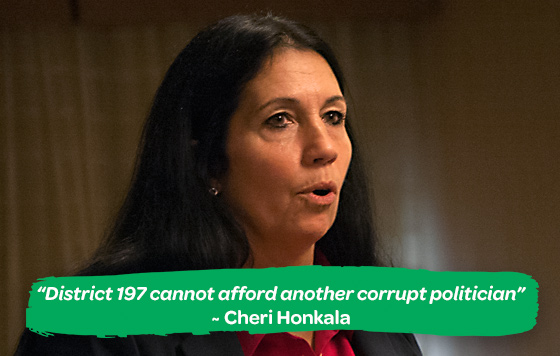 Cheri Honkala for the 197th
www.cheri197.com

PHILADELPHIA, Pa. — Cheri Honkala, a well-known Kensington-based anti-poverty activist and Green Party candidate for Pennsylvania State Representative in the 197th district will now run as a write-in candidate in the March 21 special election because of a state agency's clerical error.

This afternoon, the Pennsylvania Supreme Court ruled 4-3 to uphold the Commonwealth Court's February 15 ruling that Honkala should be kept off the ballot.

Unfortunately, the powers that be have gotten in the way of Honkala's path to victory. The Green Party of Pennsylvania (GPPA) submitted paperwork on time to place Cheri Honkala on their special election ballot line that they legally received as a recognized minor party. They asked the state if they needed to submit anything else. The state said no. The day after the deadline, GPPA got an email saying Honkala needed to submit one more document. It was rushed to Harrisburg that day. The party's swift response didn't help — Honkala was not allowed onto the ballot.

"This ruling flies in the face of voters' First Amendment right to freedom of expression and their right to vote," said Samuel Stretton, Honkala's lawyer. "The state of Pennsylvania is ground zero for an election justice movement."

Cheri Honkala, who has advocated for poor and homeless persons in and around the 197th district for the past 30 years, vowed to continue her campaign.

"It's unfair to the voters of the 197th district that I got knocked off the ballot because of a state agency's carelessness," Honkala said. "Regardless, I'm moving forward with an aggressive write-in campaign because this district needs an advocate who knows these communities and has a decades-long record of fighting for poor and working class persons."

Campaign Chairman Edgardo Gonzalez explained, "This district has had two representatives in a row—both of whom happened to be Democrats—that have resigned on federal corruption charges. This was followed by the nomination by some Democrats of a candidate who does not even live in Philadelphia, let alone the district. We need a new voice to advocate for our district in Harrisburg—not the politics-as-usual that has gotten us nowhere."

In November 2016, two Green Party candidates for statewide office, Jay Sweeney for Auditor General and Kristin Combs for State Treasurer, each received over 150,000 votes. This allowed GPPA to regain minor party status and secure automatic ballot status in special elections. As a result, citizens can more easily register to vote as Greens*, and the party can more easily field candidates in special elections. Despite that achievement, the state still has not updated its voter registration forms to give people the option to register with the Green Party.

"I specifically asked if there was anything else we needed to do to place Cheri on the ballot and was told, 'no,'" said Hillary Kane, Treasurer of Cheri Honkala's campaign for State Representative and outgoing Secretary of the Green Party of Pennsylvania. "The second we learned we were missing a document we immediately completed the paperwork, rushed it to Harrisburg, and were there within 24 hours. The Green Party earned a ballot line. A majority of Americans want more than the two major parties. Our Commonwealth must prioritize democratic integrity and voter expression over bureaucratic maneuvers to uphold politics-as-usual."

Former State Representative Leslie Acosta is the second Democrat representing the 197th District in a row to resign after pleading guilty to federal fraud charges. Acosta secretly pleaded guilty in March 2016, keeping this knowledge from her constituents until finally resigning almost a full year later in January 2017. She herself took office after winning a special election in 2014 to replace J.P. Miranda, who pled guilty to keeping a "ghost employee" on his payroll.

Gonzalez added, "Today, the Commonwealth Court also decided to keep the replacement that some Democrats chose off the ballot, Emilio Vazquez. It will show the true colors of the court system if the state Supreme Court overturns the Vazquez ruling. They will be saying that they are punishing the Green Party for the state's clerical error while permitting another party that knowingly nominated someone who is not legally qualified to slip past candidate requirements."

"We will continue this fight at the ballot box. For me, running is not choice. It is an imperative. There is too much at stake for the poor and hungry persons of this district, for children and immigrants, to simply hand this seat over to corrupt politics-as-usual once again," Honkala concluded.

The 197th district is one of Pennsylvania's poorest districts, located in north Philly where drug overdoses, murders, homelessness and hunger are the norm.

Honkala is a long-time advocate for the poor. After pulling herself out of homelessness in the 1980s, she and her young son broke into abandoned HUD properties when she discovered abandoned homes across the United States are kept heated in the winter because officials don't want pipes that bust from freezing over. She has been advocating for poor people since.

Soon after Honkala's elected as Pennsylvania state representative on March 21, she's renting a van, picking up every homeless person she sees, and housing them in her district office or in the State Capitol rotunda in Harrisburg.

While she will push for legislation that addresses the basic human rights of the residents of the 197th district, Honkala is not waiting around for laws to be passed to do what's right. That's why she'll also give sanctuary to immigrants fearing imminent deportation by allowing them to come to her district office. ICE will have to through her and her lawyers to get to anyone who is at risk of deportation.

This write-in campaign won't be won without boots on the ground. Cheri needs just 3,000 votes to win this special election. She's holding trainings for volunteers: cheri197.com/events