Solidarity In Peace - Honoring the International Day of Peace 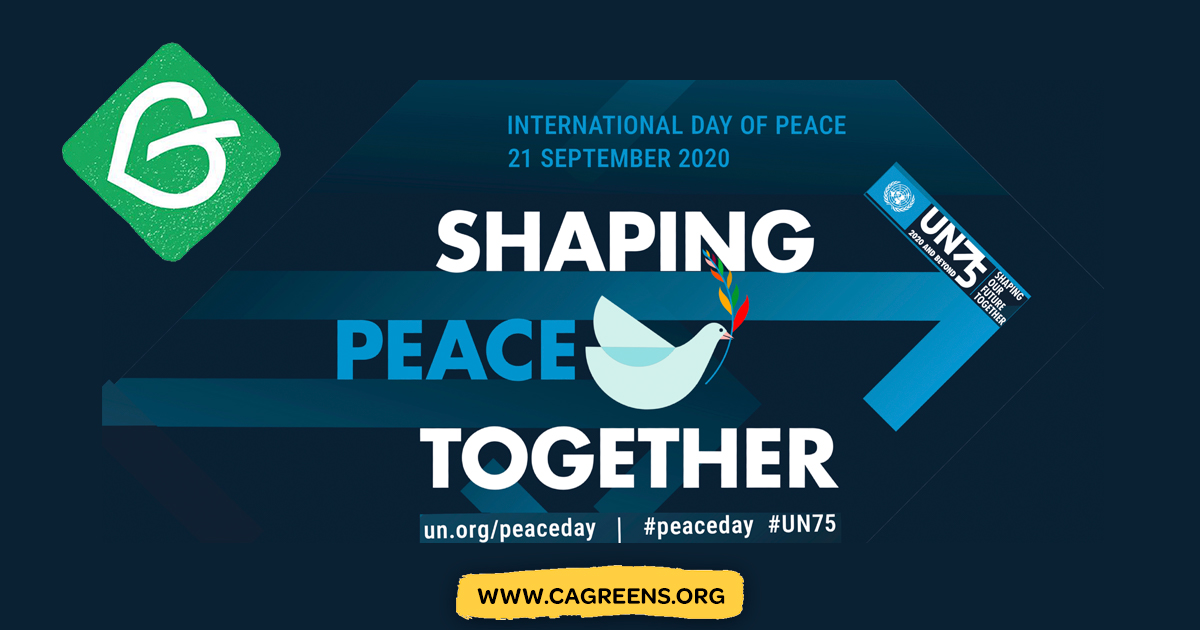 The International Day of Peace was first established in 1981 by the United Nations General Assembly as a day devoted to strengthening the ideals of peace and it is annually commemorated on the 21st of September.

Today, as the world tackles a real common enemy in COVID-19 we are reminded that on a round planet there are no boundaries and no sides, and that injury and injustice anywhere hinders the pursuit of justice everywhere.

On this September 21st, we would like to share the statement below partially drawn from an unpublished essay written in May 2020 by Susan Lamont, a Council member of the Green Party of Sonoma County and by Jack Wikse.

Monday, September 21st marks both the 39th anniversary of the United Nations International Day of Peace and the 19th anniversary of the vote to pass the post-9/11 Authorization for Use of Military Force, or AUMF. On a day dedicated to “education and public awareness on issues related to peace,” the United States Congress and the President agreed to make war the perpetual state of the country and, therefore, the world.

The International Day of Peace, a resolution to “commit to peace above all difference,” was passed unanimously, by peaceful and warlike countries alike. The AUMF, a blank check for the U.S. military to fight “terrorism” anywhere it was imagined, was voted on by both houses of Congress 518-1. The disconnect between creating a day of peace on the one hand and the complete commitment to war by both U.S. corporate parties on the other hand is stark.

The Green Party of California understands that this is an irreconcilable difference and believes that “if a nation, and a people, prepare for violence, they will create a violent world.” The only way to achieve peace is to prepare for it.

This year’s Peace Day theme is “Shaping Peace Together” and the emphasis is on working together globally to end the COVID-19 pandemic. In acting against a common threat, bonds can be created which would enhance cooperation across the many crises humanity and life on earth face. As the GPCA platform clearly states, the “means and ends are inseparable.”

Earlier this year, United Nations Secretary-General António Guterres called for an immediate global ceasefire saying, “End the sickness of war and fight the disease that is ravaging our world…..That is what our human family needs.…” His call for “solidarity across borders” is consistent with the Green Party’s belief that peace, environmental responsibility and health are intimately connected. Let’s recognize this opportunity to rethink the ways in which we interact as people and as nations. The ramifications of war and preparation for war echo in every corner of human society with devastating effect. Imagine the ramifications of following the Green Party’s call for international cooperation!

Anyone who now denies we are one interdependent human species across borders on mother earth is not alive to the unprecedented moment we share today.

In our sheltering in place, let us reflect on the very real opportunities to end our unsustainable way of life. The rule of the 1% and the parties which represent them have confronted us with a real line of death. We have the obligation to embrace and promote the Green Party’s message that fosters communities of peace and justice. This culture’s prejudice toward war is being revealed. The political theorist Hannah Arendt wrote: “In every historical crisis, it is the prejudices that begin to crumble first and can no longer be relied upon.”

"The Green Party advocates a fundamental change in the way we socialize our citizens, structure our institutions, and relate to the planet and its people.” On this 2020 International Day of Peace, let’s remind people loudly and clearly that “peace is not just the absence of violence, it is a willingness to resolve conflict in a constructive manner with a spirit of good will and respect.”

Thank you,
Green Party of California