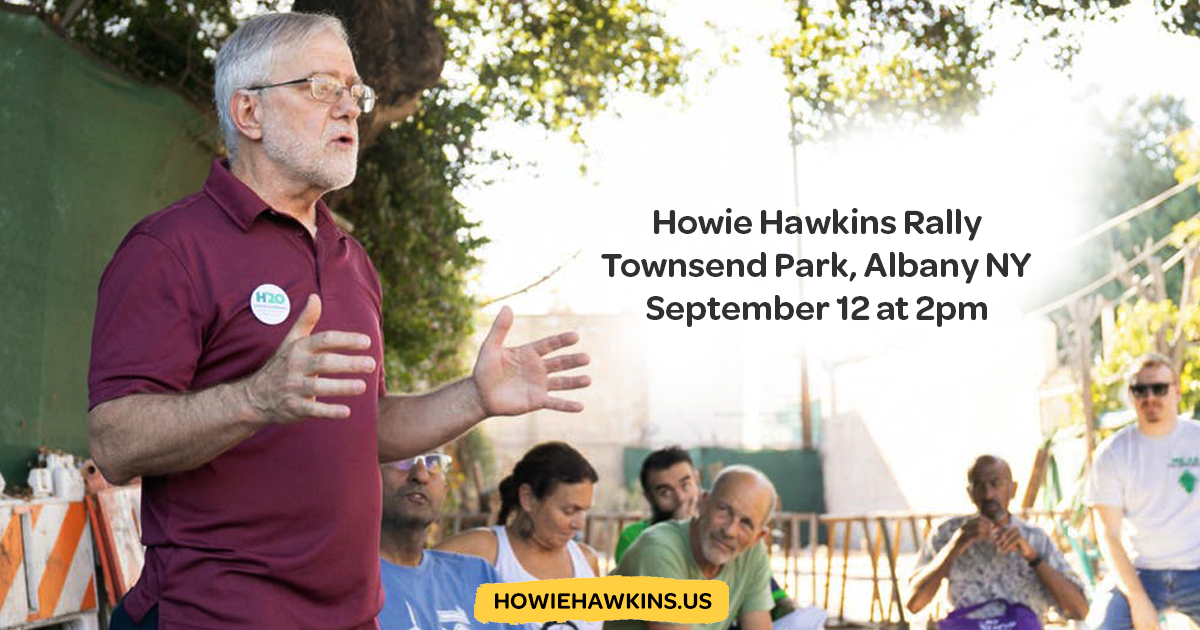 ALBANY, NY - A coalition of local organizations and activists from the Capital District will hold a rally for Green Party Presidential candidate Howie Hawkins on Saturday, September 12 at 2:00 pm at Townsend Park (intersection of Central Ave., Washington Ave., and Henry Johnson Blvd.). Hawkins is campaigning in Albany, which Biden and Trump will not do.

Hawkins is also coming to Albany at a time when the Green Party of New York's future is uncertain due to increased vote thresholds and signature requirements enacted by Governor Andrew Cuomo. Other speakers include Steve Greenfield, candidate for Congressional District 19, and Robert Alft, candidate for NYS Senate District 46.

Hawkins ran for New York State Governor in 2010, 2014, and 2018, each time earning more than the 50,000 votes needed to secure ballot status for the Green Party for the following four years. In the March 2019 budget bill Cuomo created the Public Campaign Financing Commission headed by Jay Jacobs, Chairman of the State Democratic Party, longtime Chairman of the Nassau County Democratic Party, and at large member of the Democratic National Committee, which went on to recommend that parties be subject to a new higher threshold every two years of 130,000 votes or 2% of the vote, whichever is higher, and tripled the number of signatures from 15,000 to 45,000 to get on the ballot in a statewide race.

The recommendations became law in December 2019 and then in March 2020 a State Supreme Court judge in Niagara County struck down the new law because it was not passed by the legislature. Then at the last minute in the April 2020 budget bill Cuomo made the recommendations law during the state shutdown due to the coronavirus pandemic. On September 1 a US District Court Judge for the Southern District of New York denied the motions of the Working Families Party and the Serve America Movement Party to grant a preliminary injunction against the law.

Hawkins was the first US candidate to run on the Green New Deal and is the only campaign to reach federal primary matching funds. Hawkins is running on a left unity ticket, and has been endorsed by the Green Party, the Socialist Party USA, Socialist Alternative, Legal Marijuana Now Party of Minnesota, Independent Socialist Group, Democratic Socialists of America (Colorado Springs and Salt Lake), and Solidarity. On Saturday Hawkins will discuss his signature platform centered on the Ecosocialist Green New Deal which includes Medicare for all, lifelong free public education, student debt relief, and a secure retirement.

Organizations cosponsoring the rally on Saturday include the Upper Hudson Green Party, the Capital District Socialist Party, and the Schenectady branch of Socialist Alternative. Masks and social distancing are required for the rally.