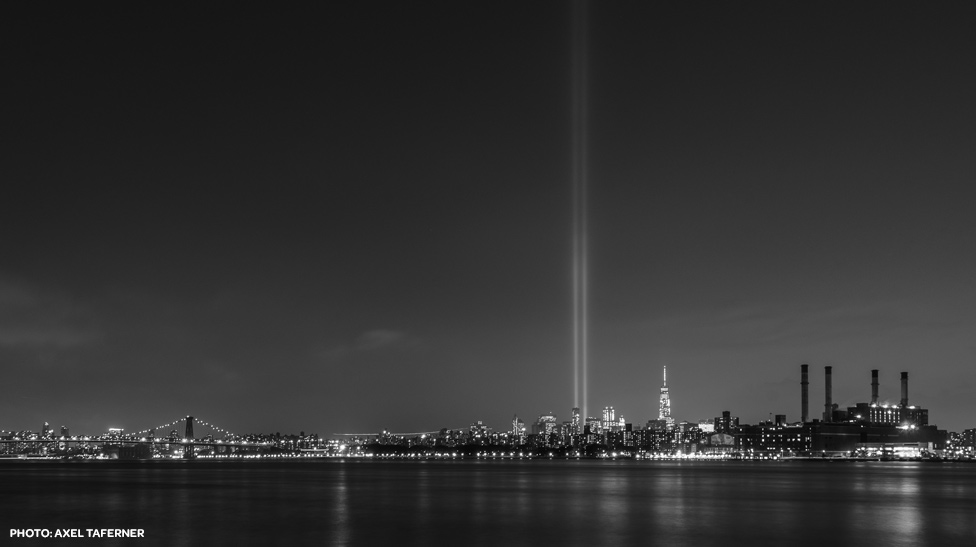 I remember my pain. All our pain.

I remember that many of us said do not treat our cries of grief as a cry for war.

Seek justice. Treat it as a criminal act.

Use it to build peace, not war.

I remember the words of Phyllis and Orlando Rodriguez, whose son died at the World Trade Center: “We see our hurt and anger reflected among everybody we meet. We fear that many want our country to head in the direction of violent revenge. It is not the way to go. It will not avenge our son’s death.”

I remember the gay rugby player who was among several who jumped to fight for the control of the plane in Pennsylvania.

I remember all the first responders, the firemen and police officers who rushed in to help. And died.

But our politicians and the media rushed to war

They launched a war on terror.

It is time to declare the War on Terror over. To seek peace.

I remember all who died in the Middle East due to our invasion of Iraq, a bad actor – like many tyrants we have supported and still support – but which had nothing to do with 9/11.

I remember that our national leaders lied to us and the world.

They used their lies to suppress civil liberties at home and abroad.

I remember that Afghanistan is our longest war – and counting. People still die. Especially innocent civilians.

I remember far too many acts of terrorism since 9/11.

So many lives lost and harmed.

The War on Terror has not brought us peace. Or Justice.

I don’t remember a time when the US was not at war with someone. War is the wrong path.

I remember the 4,000 who died a year ago in Puerto Rico. Of Houston and Florida.

The millions fleeing war in Syria that was stoked by climate change and massive drought. With millions more climate refugees to come.

The wildfires in California, everywhere, floods, extreme rain, people drowning in the ocean to escape from being burnt to death in Greece. Hurricanes Sandy and Irene, Katrina – with more coming. The arctic circle on fire.

The hundreds of thousands who already die annually from climate impact.

The sixth great extinction of species.

I certainly can not remember peace in the Middle East. We need peace and justice for Palestinians and Israelis, starting with ending the inhumane conditions in the occupied territories.

I remember that is the poor of the world who suffer for the greed and sins of the rich.

It is long past time to slash our military budget and imperial world power – and divert the vast majority of those resources to solving climate change before it is too late.

We know how to transition from fossil fuels to clean renewable energy. To make a better world. To live sustainably.

We just lack the political will. To say no to fossil fuel companies and their campaign contributions.

Climate change poses the threat of a near-term social collapse and species extinction. The NY Times Magazine recently reported that we have waited too long; we are paralyzed with partisan gridlock. We’re doomed.

We need to prove the NY Times wrong.

That requires full-scale mobilization of all of society. Top priority for everyone.

The future of life on our planet depends on it.

Trump must go. As does most of the other so-called elected leaders.

I want future generations to remember us as those who said enough is enough, save humanity, save the planet.
Cooperate for the common good.

Mark Dunlea is author of Madame President: The Unauthorized Biography of the First Green Party President, which may have been the first novel on 9/11.