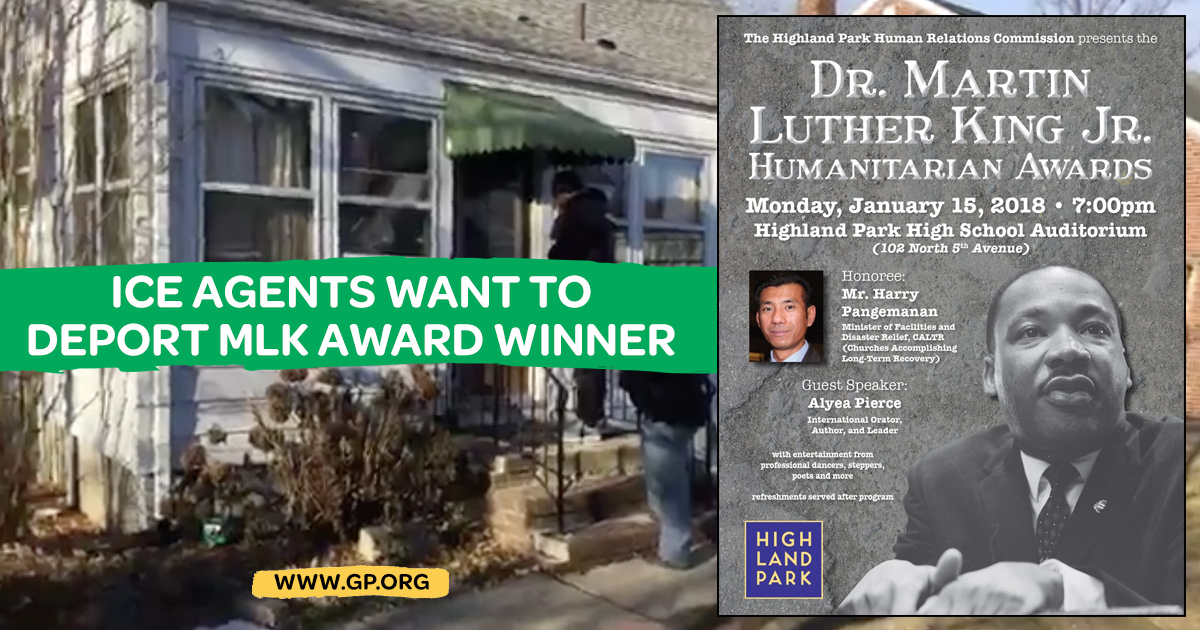 Just days after winning the Martin Luther King Jr. Humanitarian Award from the Highland Park, New Jersey Human Relations Commission, ICE agents showed up at the home of Harry Pangemanan. He won the award for helping restore 209 houses damaged during Super Storm Sandy. See below for a 2016 report about Pangemanan's volunteer work. 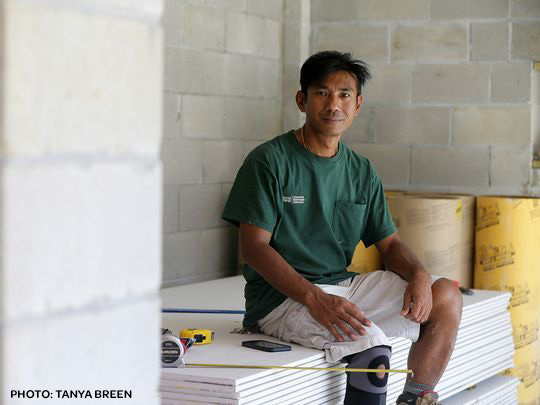 An undocumented immigrant from Indonesia has dedicated the last four years to helping residents rebuild their homes on the Shore after Superstorm Sandy.

MIDDLETOWN - Harry Pangemanan's favorite moment, he says, is when the kids see their rooms for the first time. For some, it's taken years to rebuild since superstorm Sandy swept through their homes leaving a soaked mush of debris.

"When we have the family go back to the house, that's always the most joyful part," Pangemanan, a member of The Reformed Church of Highland Park, who has worked since 2012 to rebuild homes along the Jersey Shore and help families return home. "Especially the kids, 'I miss my room, my room is back,' they say."

Pangemanan, 46, knows what it's like to feel displaced and unable to go home. He spent 68 days at Elizabeth Detention Center, was nearly deported back to Indonesia and took refuge at the church for 11 months, fearful another immigration raid would separate him from his wife and two daughters.

His church community rallied to his rescue. They held daily vigils outside the detention center. They visited Pangemanan and prayed for him through the acrylic glass dividers. They reached out to elected officials and incessantly called immigration agents until Pangemanan received a temporary reprieve from deportation and a work permit. But he still remains an undocumented immigrant.

"Without my church community I won't be here," said Pangemanan, who arrived from Indonesia in the 1993 and overstayed his visa. He knows what it's like to run out of options — and how a community can make all the difference.

Pangemanan now spends his days trying to repay that kindness by rebuilding homes drenched and destroyed by superstorm Sandy. Flanked by volunteers from across the country and as far as Canada, Pangemanan and his team help where they can: Demolishing and insulating homes, installing drywall or, sometimes, bringing hope.

"People there that are smiling at you, that are telling you they are going to recover, it restores your faith that you are going to be able to keep going," said Kelly Brier, a homeowner in the Leonardo section of Middletown. Her home and her father's were both damaged in the storm but they only began rebuilding this year. "You come and you put up one piece of Sheetrock, that's one thing more than I had yesterday."

It's been nearly four years since Sandy swept through their homes leaving behind devastation. Many groups helping homeowners have packed up and left. But residents like Brier are still waiting for grant dollars.

"I thought that coming home after losing everything was the worst thing I was ever going to experience but I found that the red tape and aftermath was worse," she said. "It's been a constant battle for everything."

Pangemanan found her more than three years ago and helped her demolish her house. He's back, at summer's end, helping her father rebuild.

Pangemanan is the paid part-time minister associate for disaster relief at the nonprofit Churches Accomplishing Long term Recovery. He works with mostly faith-based volunteer groups to rehabilitate homes in Monmouth, Ocean and Middlesex counties for no charge. He's shepherded more than 2,000 volunteers and worked on 180 homes.

"I've been helped by community when all the troubles happen in my life," said Pangemanan, who lives in Highland Park. "I don't have much to offer but still can do something for the community because the community in Jersey Shore needs help."

With limited state dollars and insurance money, homeowners must often make up the difference. That's where Pangemanan helps, providing supplies and free labor.

He begins his days around 6 a.m. Pangemanan spends much of the day driving between homes in Long Branch, Manahawkin, Neptune, Union Beach and Highlands, in a brown van brandished with his church's insignia: Reformed Church of Highland Park.

His radio is always tuned to 99.1 FM, a Christian music station to "get my spirits up," says Pangemanan.

On a recent day in Keansburg, Pangemanan worked with a group of 42 volunteers from the Community Christian Reformed Church in Kitchener, Canada. He made sure they had generators for power, enough nails, and explained the lack of standard left turns in favor of Jersey's jughandles.

Pangemanan moves with ease among strangers, asking if they need water, ice cream and making sure they get their "union break." During a discussion about home insulation between a male and female volunteer, he joked about women always being right and said he's outnumbered at home (he has a wife and two young daughters).

Most volunteers don't know Pangemanan's back story but say he makes sure they have the supplies they need to get the work done.

"It blows our mind, to be out of your home and lose your possessions on this scale," said volunteer Arno Wassink, 51.

'If you want to help people just help them'

Pangemanan knows his immigration situation is precarious. His agreement with immigration officials is temporary and must be renewed every six months. He has a work permit but no legal status.

President Obama's executive action to shield parents of American citizens, like Pangemanan, from deportation and give them three-year work permits was blocked when the Supreme Court deadlocked in a case challenging the plan. Still, Pangemanan's immigration agreement could change once Obama leaves office.

Throughout the Republican presidential primaries, Donald Trump adopted a hard-line stance against illegal immigration, pledging to build a wall along the U.S-Mexico border, deploying a deportation force to deport 11 million undocumented immigrants and requiring an ideological test for new immigrants.

He gave an immigration policy speech earlier this month doubling down on his commitment to end illegal immigration. He stopped short of calling for the immediate deportation of all 11 million undocumented immigrants in the U.S. but said their only path toward citizenship was to self-deport and reapply for a visa.

"There will one route and one route only: To return home and apply for re-entry like everybody else under the rules of the new immigration system," Trump said. "Our message to the world will be this — you cannot obtain legal status or become a citizen of the United States by illegally entering our country."

"I'm hurt about it but I did not take that into my heart. If you want to help people just help them," he said. He doesn't share his story with many homeowners but he hopes his work will help them see immigrants in a new light.

"That is my hope, that they have some kind of flexibility and openness to talk to them and see the best of them," he said.

Reformed Church of Highland Park Pastor Seth Kaper-Dale, who fiercely fought against Pangemanan's deportation, said he hopes one day Pangemanan is recognized for his contributions to society as much as he is for his immigration status.

"I would wish he might be recognized some day as an American, as a real American," said Kaper-Dale. "He's exactly the kind of guy who should be an American citizen, he really does live in hope." 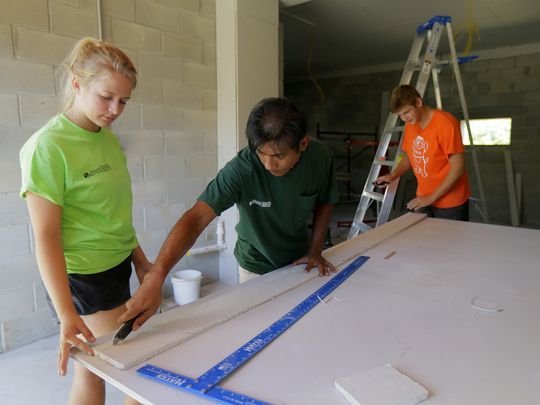 (center) Harry Pangemanan, an undocumented immigrant from Indonesia who is helping rebuild Sandy homes on the Shore, works on a home with volunteers from Community Christian Reformed Church in Kitchener, Ontario, including Nicole Nusselder, 17, and Matthew Perry, 15, on Cedar Avenue in the Leonardo section of Middletown, NJ Friday August 19, 2016. (Photo: Tanya Breen/staff photographer)