"In Solidarity for Peace" 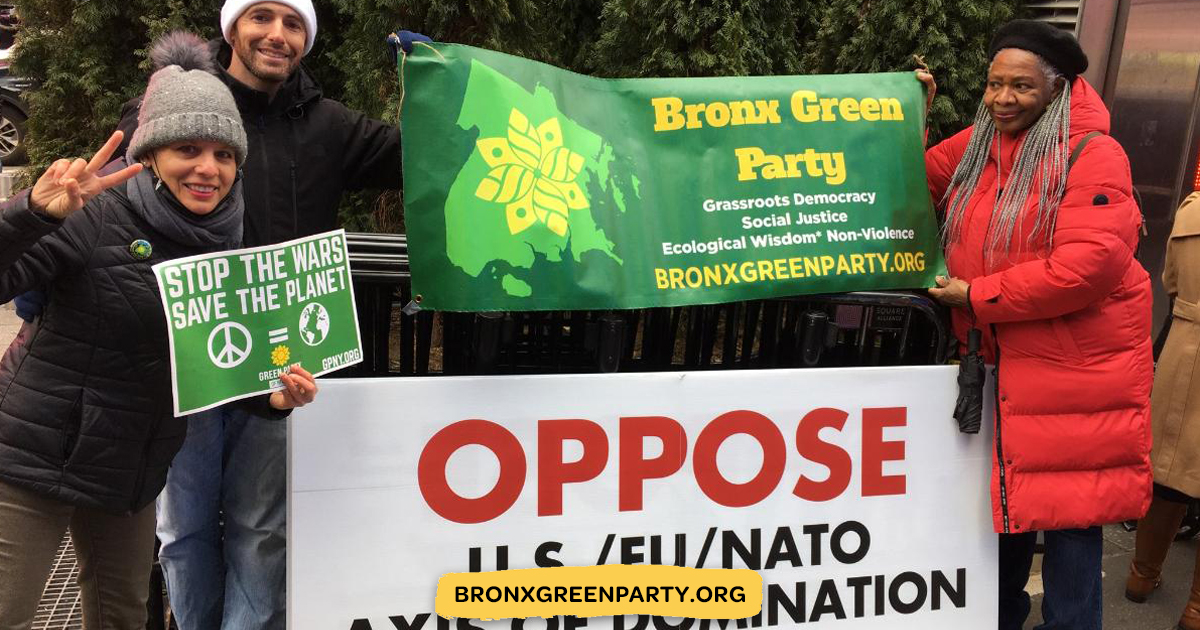 The Bronx Greens make this statement in solidarity with the anti-War Left in North, Central, and South America, Europe, Africa, and Asia. The Bronx Greens are against the war in Ukraine, and we refuse to cooperate with the US Imperialist/NATO War Machine that forced this war upon the people of Eastern Europe while creating dire consequences for the rest of the world.

Those consequences include a potential nuclear holocaust, the ecological destruction of one of the world's most important food sources, deaths of hundreds of thousands of people from conventional warfare, all the needless hardships that all other countries are suffering due to this war, and the sacrifice of democracy in the creation of new military dictatorships. The Bronx Greens hope that a worldwide people's struggle will defeat these Imperialistic designs, leading to worldwide democracy and a systemic change wherein new governments will be responsible for the needs of the people and not act as the tools of national and international plutocrats.

As one of the world's greatest propagandist nations, previously admired by the likes of German Nazis and the Soviets, the United States government has spun the Ukrainian war as an idyllic David and Goliath conquest. From the Sinking of the Maine (1898, Spanish American War), the Gulf of Tonkin (1964, Vietnam War) to the Weapons of Mass Destruction in Iraq, the Ukrainian War is based on half-truths and lies. Yet, the war is far from the "Zelensky" fairytale. Hence, we must confront reality if Americans want to stop this conflict, save lives, and avoid armageddon.

We must realize that the United States government is Ukraine's biggest obstacle to peace. And in addition, recognize the genius behind the evil pattern in which American imperialists operate at the behest of billionaires and multinational corporations. From the beginning, the Ukrainian war checked all the boxes of previous wars' half-truths, lies, obfuscations, deceptions, and assaults on democracy.

Among the US propaganda tactics wielded in promoting conflicts:

The Ukrainian war is 100 percent the fault of United States’s imperialism. This is a U.S. proxy war fought against Russia using the Ukrainian people as cannon fodder. Ukraine has been a client-state of the United States since the 2014 Maidan coup and has been groomed for the last eight years to fight Russia.  Recent revelations by the former German chancellor Angela Merkel, and the fifth president of Ukraine from 2014 to 2019, Petro Oleksiyovych Poroshenko, admitted the Peace Agreements talks were never going to be implemented and were a ploy to buy time to rearm and train the Ukrainian military.

Looking at a map, it does not take a scholar to figure out that the United States' scheme is to surround Russia with NATO-friendly nations. The biggest prize is Crimea because it would cut Russia off from its Naval base and the Black Sea.

The American media has egregiously censored the backstory of how the war developed.

To its credit, Russia resisted taking the bait of invading Ukraine until February 24th, 2022.

Unfortunately, when Ukraine refused to fulfill the peace agreement of Minsk I and II, when Ukraine escalated its bombing of the people of Donbas, when the U.S. refused to guarantee Ukraine would not become a NATO member, when Zelensky threatened Russia with obtaining a nuclear bomb- Russia predictably reacted, and Ukraine's fate was sealed.

Russia was within its right to protect itself from having a U.S.-funded extremist nationalist client state at its border. Though the violence is horrific for the Ukrainians and Russians alike, it is understandable how the chain of events led to this war.

The Ukrainians have paid a high price with the loss of life and half their territory. Additionally, Europe is in an economic meltdown, and American resources have been wasted on unending military engagement.

We, Americans, must take responsibility for the chaos our government has created.

Therefore, the American people must take action against policies that have destroyed Ukraine, leading to a direct confrontation with a nuclear-armed nation, Russia.

While President Biden owns equal responsibility, it has long been the political reality that US policies remain the same no matter who is in office. The corrupt system which protects those who instigate and enforce such murderous agendas for corporate interests - must be dismantled.

The United States cannot claim diplomatic standing. Given its funding of the Ukrainian war effort, supplying endless armaments, threatening other countries who do not comply with its actions, or participating in punitive sanctions- the US is the problem, not the solution.

Forming critical, correct conclusions on *any* issue requires access to all relevant – and often dissenting - information and a mind unhobbled by fear of reprisals (be they economic, physical, or other) from authority or status quo. One cannot be free without truth. Therefore past, future, and current knowledge must be protected and allowed to flow.

In order to counter censorship, disinformation, manipulation, and indoctrination from both the government and media corporations, the following policies should be enacted immediately:

In 2023, we see the war worsening. With the escalating policy of arming Ukrainians with increasingly lethal weapons, the U.S. government has made it clear there is no official desire to end the war. Though the State Department's neocons have partly gotten their wish of seducing the Russians into neverending occupation, they have not achieved their ultimate aim of Russian regime change.

Our list is not the only actions that need to be taken, but it is a start to hold our government answerable and take control of what is done under our nation’s name with our tax dollars. The proxy war in Ukraine is the latest manipulative, immoral endeavor of the American empire which could dangerously widen to be its and the world’s last. Let’s hold the US accountable and work toward a peaceful settlement of the Ukrainian war and end all future empire wars.

It has never been so crucial that the left unite and take steps to disassemble the rogue entity we call the United States government.

“The time has come for America to hear the truth about this tragic war. In international conflicts, the truth is hard to come by because most nations are deceived about themselves. Rationalizations and the incessant search for scapegoats are the psychological cataracts that blind us to our sins. But the day has passed for superficial patriotism. He who lives with untruth lives in spiritual slavery.”
~ Martin Luther King speaking of Vietnam

Golinkin, Lev. “Neo-Nazis and the Far Right Are on the March in Ukraine.” The Nation, March 4, 2022.
https://www.thenation.com/article/politics/neo-nazis-far-right-ukraine/

“What Is the Rules-Based Order?” PopularResistance.Org, December 28, 2022.
https://popularresistance.org/what-is-the-rules-based-order/