Report from the International Conference on Monetary Reform 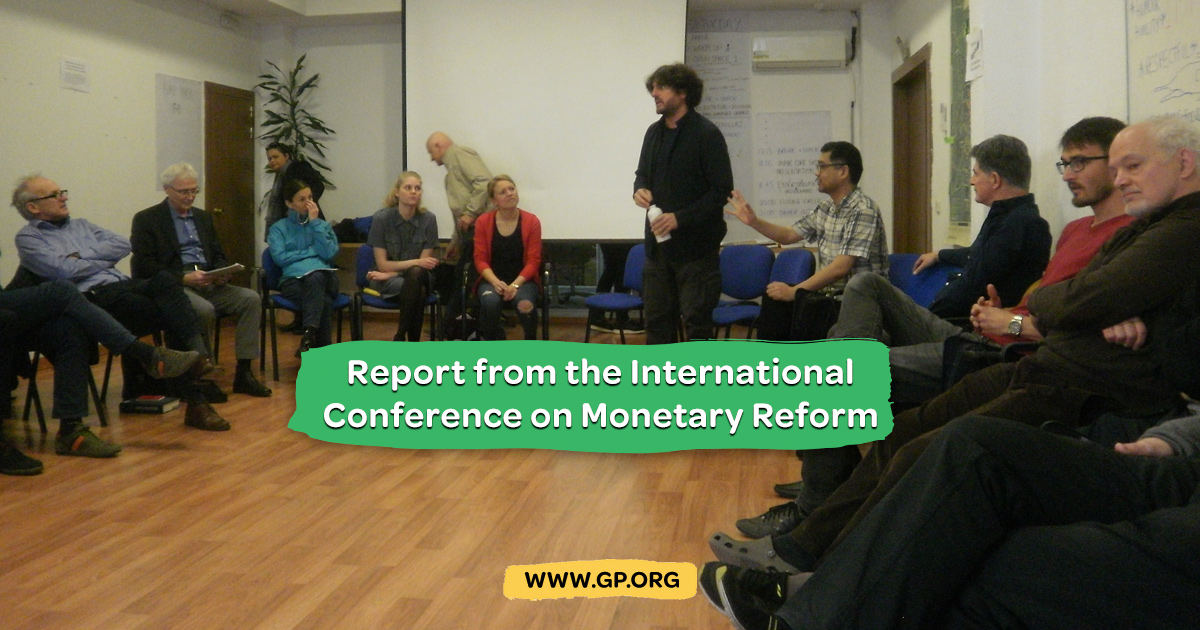 Several members of the Banking and Monetary Reform Committee (BMRC), have been studying and promoting monetary reform for many years. One BMRC member, Sue Peters, is also an active member of the American Monetary Institute (AMI), the Alliance for Just Money (A4JM), Greens For Monetary Reform, and a NYC neighborhood study/activist group called ‘The Fed Group.’

She recently attended a 3-day annual conference of the International Movement for Monetary Reform (IMMR) in Madrid as a representative of A4JM. The IMMR is a coalition of organizations from more than 20 countries around the globe, whose common connection is a proposal to transition towards a sovereign money system, the implementation of which aligns with the Green Party of the United States platform of ‘Greening the Dollar.’

Sue reported back to the BMRC while still in Spain, describing the conference as “extremely valuable to myself and the other participants,” She also added, “It was packed full of great contact and sharing of ideas. I got one British member to say he would sign up for the Green Party UK-Wales because he discovered from me that they have the monetary reform plank like ours.”

We were also pleased to hear that Sue had been awarded a scholarship by the AMI while there, to do original research and give a Keynote Lecture at their annual meeting in October. The subject of the lecture is “War drives Debt, Debt drives War.” We will most likely be reporting on more of her activities.

At our recent committee meeting, Sue described some highlights from the conference. Professor Joseph Huber, chair of economic and environmental sociology at Martin Luther University of Halle-Wittenberg, Germany, spoke in a plenary session about Modern Monetary Theory (MMT). He referred to MMT twice as a “false flag operation.” MMT is not widely known throughout Europe. Some attendees were hearing about it for the first time. At a later breakout session, Sue explained to about 15 attendees the attempt by proponents of MMT to amend the Green Party of the United States platform last summer.

Attendees at the conference were mostly from European countries (some of which do not use the Euro), and also from South Africa. Other breakout sessions discussed topics on localized issues – such as the independence of the EU Central Bank in Brussels.

Our committee is fortunate to have Sue as a member. She contributes much to the committee, and we look forward to reporting on more of her monetary reform adventures.