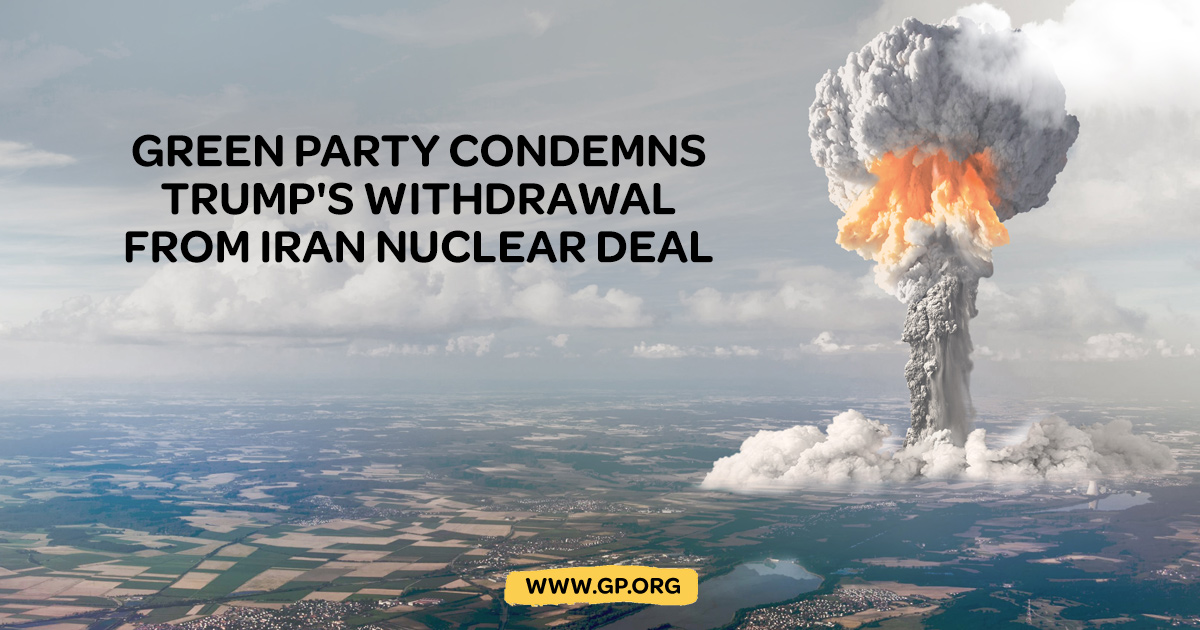 The Green Party of the United States condemns President Trump's reckless withdrawal from the Joint Comprehensive Plan of Action (JCPOA) on Tuesday afternoon, May 8, 2018, and rejects the President's baseless statement that "this was a horrible, one-sided deal that should have never, ever been made."

In spite of the saber-rattling rhetoric, Iran has remained compliant with the deal, according to the International Atomic Energy Agency (IAEA). The Green Party notes the one-sided nature of this deal, which punishes Iran while allowing Israel to proliferate nuclear weapons for "self-defense," a move that increases the possibility for escalated conflict in the Middle East. As stated by Michael J. Koplow of Haaretz Tuesday, "Netanyahu has convinced Trump that leaving the Iran deal protects Israel. But the U.S. walkout means a full on Israel-Iran war in Syria now becomes far more likely. "

According to Trita Parsi, president of the National Iranian American Council (NIAC), "Donald Trump has committed what will go down as one of the greatest acts of self-sabotage in American's modern history."

"The US has been the clear instigator in reviving a global nuclear arms race and remains the only nation to use nuclear weapons as an act of war. The United States has committed to nuclear weapon modernization program with a price tag of more than a trillion dollars, with the goal of ensuring a clear first-strike global advantage," noted Tony Ndege, co-chair of the Green Party of the United States.

The Green Party vice presidential nominee in 2016 and noted human rights activist, Ajamu Baraka, stated, "The first item is to call for the agreement to be respected as a framework for further agreements, including a de-nuclearized Middle-East region." Mr. Baraka went on to point out that the Green Party condemns any moves toward the justification for military conflict, and he continued, "we oppose war, nuclear weapons and militarization, without any hesitation."

Bahram Zandi, co-chair of the Green Party International Committee sharply pointed out that "the United States never did its share of diplomacy, holding only Iran to the terms of this deal to stabilize the region, while Israel kept its nuclear weapons and threatened, attacked and killed people in neighboring Syria, including Iranian soldiers on the ground."

The Green Party calls for equilibrium in the Middle East and for all regional stakeholders to be held equally accountable for peace. "The United States should call for a nuclear weapons freeze for all including Israel, in order to level the playing field of the responsibility of keeping the peace," remarked Dr. Zandi.