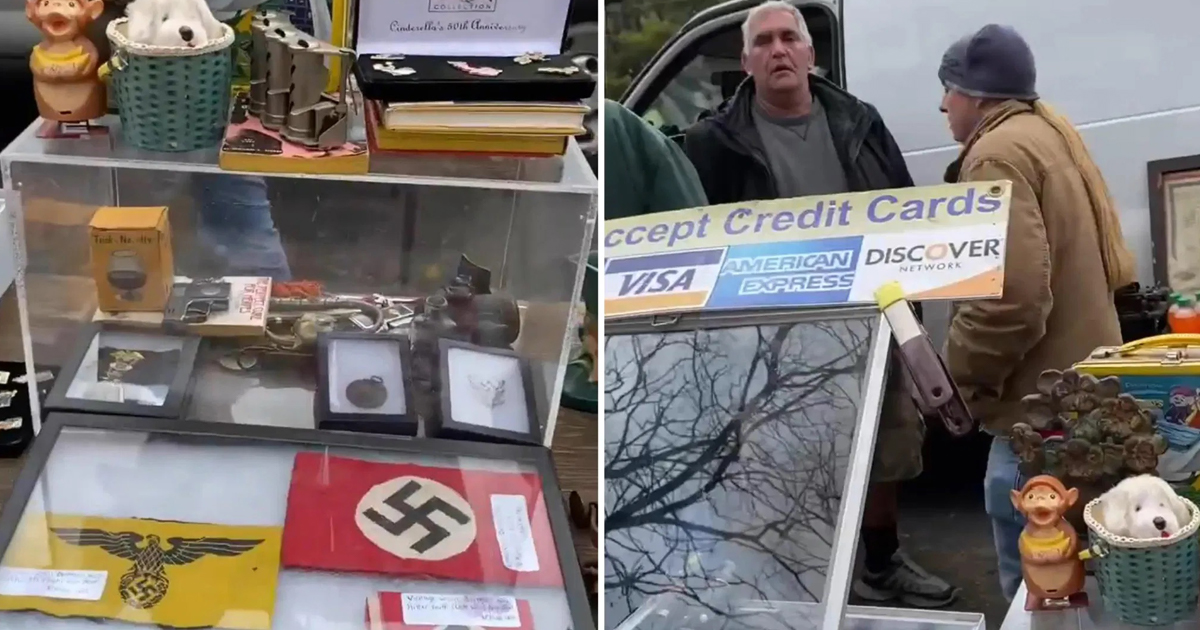 Left, the items being sold at the Redwood County Flea Market in Wallingford, CT. Right, the guy selling them

During the 2020 Presidential election, there was no shortage of lawn signs and banners in Wallingford, Connecticut showing support for Donald Trump. I rolled my eyes at each one that we passed and said to myself, “Rural Connecticut”. I live an hour south, in an urban area, where there was seemingly far less support for the 45th President of the United States.

I have friends in Wallingford, and visit frequently, but it wasn’t until Saturday, April 17, that I checked out Redwood County Flea Market at 170 South Turnpike Road.

The flea markets that I am used to are mostly indoors, with dozens of booths selling jewelry, handbags and sneakers. What I saw at Redwood was quite different. I walked by tables lined with old toys, tools, records, and yellowed newspapers and magazines. The people walking around seemed to be regulars and vendors were engaged in conversation with each other.

As I neared the end of my loop around the outdoor market, I saw a table set up in front of a white van. On it was a display case with Nazi Swaztika armbands and pins. The woman overseeing the booth was clad in a heavy work jacket and wool hat, her face expressionless. I stood there in disbelief and stared at the items that were priced at $175. The young man next to me was excitedly asking questions and trying to talk the woman down to $100 for one of the armbands.

I turned my head and looked around at the people walking around Redwood. Not one face showed concern or alarm. In fact, things seemed pretty business as usual, which really freaked me out. Was I the only one who cared that there was a booth shamelessly selling white supremacist gear right out in broad daylight?

I snapped a photo of the armbands and pins and walked away. I got to the car, and had an overwhelming feeling of dread and disgust. I could not leave Redwood without saying something; so I marched myself back to the booth, turned my camera on and confronted the man who was supervising the booth. The woman said nothing and the grey-haired man mumbled vaguely about the items' historical significance as he turned away from me. That man, and the people who work with him should be ashamed of themselves. I stormed away, but I wasn't done.

The next morning, I decided to do some digging on the internet and came across a posting for a weekly auction in Seymour, Connecticut, run by Keystone Associates, Inc. I read the post about the "Peddlers Auction", and there, listed as one of the items for sale, was a Nazi Swastika flag.

I called the phone number listed and was greeted by a gruff sounding man. I inquired about the auction itself and then the flag. "I was wondering about the authenticity of the flag. I've seen several sellers claim that they are selling the real thing, can you tell me…" The man placed me on hold, and then came back a minute later and told me that it was indeed authentic.

"Oh great, can you tell me who the seller is?"

"You don't need to know that. And by the way, we sell these things for historical purposes only. We don't sell them for anybody who is looking to…. AND WHO ARE YOU?!"

Putting aside the evasive "historical purposes" justification for hawking such items, how would Keystone go about verifying such intent by the buyer, (not to mention what would constitute it.)

These past couple of days have really shook me. I am a lifelong resident of Connecticut, and I had no idea that this was happening around me. I can tell you for sure that I am going to be paying a lot more attention from now on-And I will continue to speak up. I am far from done.