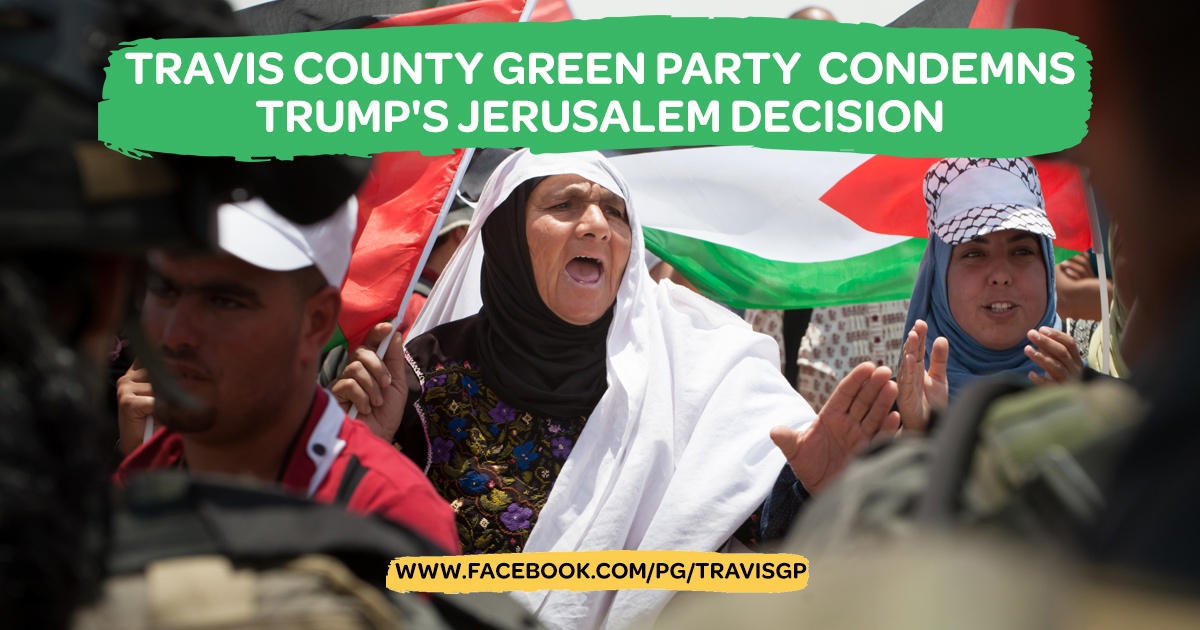 Travis County Green Party (TCGP) strongly opposes and condemns the decision by President Trump to recognize Jerusalem as the capital of Israel, as well as plans to move the US embassy from Tel Aviv to Jerusalem.

East Jerusalem, occupied by Israel in 1967, is recognized by the United Nations as an inseparable part of the occupied Palestinian territory, and no other state in the world recognizes Jerusalem as Israel's capital. The annexation of East Jerusalem into Israel is a blatant violation of international law. When Israel declared Jerusalem "complete and united" as the "capital of Israel", the UN Security Council adopted resolution 476 stating that "measures which have altered the geographic, demographic and historical character and status of the Holy City of Jerusalem.. constitute a serious obstruction to achieving a comprehensive, just and lasting peace in the Middle East."

The President's implicit endorsement of this annexation is a negation of Palestinian rights and a predetermination of a final status that was supposed to be negotiated and resolved by mutual agreement between Israel and the Palestinians.

The announcement is also a green light for Israel's continued dispossession, oppression, and displacement of the Palestinian residents of the city. For decades, the United States has supported, justified and shielded from accountability Israel’s policies of ethnically cleansing Palestinians, stealing their land to build illegal Jewish-only settlements on it, and denying Palestinians in East Jerusalem and elsewhere their basic human rights and dignity.

U.S. funding of Israel, including a commitment of 38 billion dollars over 10 years, makes it complicit in all the military aggression and war crimes committed by Israel.

At the same time, the U.S. government continues to cut social funding on education, health, jobs, environmental protection and other necessities in the United States. These severe cuts are affecting the most marginalized communities in the country, particularly people of color. The struggle for Palestinian liberation is directly connected to the struggles for racial, social, economic and environmental justice here in the United States and beyond.

The Green Party supports equal rights for all and reaffirms its support for the Palestinian call for Boycott, Divestment, and Sanctions (BDS) against Israel until:

a) Israel ends its occupation of all Arab lands and dismantles the Apartheid Wall,

b) Recognizes the rights of the Palestinian citizens of Israel to full equality, and

c) Allows the Palestinian refugees and their descendants to return to their homes.

TCGP urges all those opposed to Trump's policies to increase their solidarity with the Palestinian people by supporting the BDS movement. The President's announcement is further proof, if any were needed, that the U.S. isn't qualified to be a neutral "peace broker" and that it has openly aligned itself with racist supremacy.

No peace is possible without recognizing and protecting the universal human rights of all people, including equality, self-determination, and the refugees' right of return.

The Green Party demands the reversal of current US policies, which have enabled the continuation of injustice, oppression, and strife throughout the Middle East.