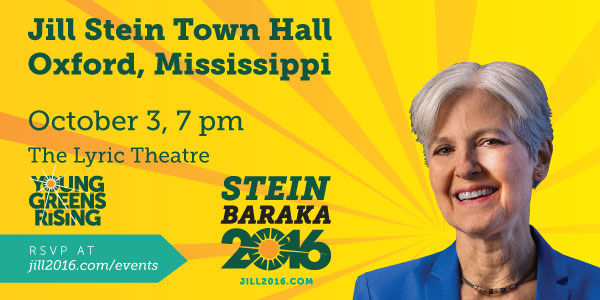 Following opening remarks by Jill Stein, students will pose questions to her live. Her visit is sponsored by Popular Resistance, Mississippi Chapter, a sanctioned student activity group at Ole Miss, and the Green Party of Mississippi. More information is at https://www.facebook.com/groups/846337568787104/

Jill Stein and her running mate, Ajamu Baraka ( www.ajamubaraka.com ), are on the ballot in Mississippi and enough other states so they statistically could win the election. Details of an October visit by Mr. Baraka to Mississippi will be announced soon.

The Stein/Baraka platform ( http://www.jill2016.com/plan ) includes a Green New Deal with millions of jobs to achieve 100% clean renewable energy by 2030; investing in public transit, sustainable agriculture, and conservation; racial justice and human rights; and establishing rights to education, health care, and jobs for all.

On Monday, September 26, Stein and hundreds of supporters went to the venue of the first presidential debate at Hofstra University in New York. She was soon escorted off the campus, and supporters held a "People's Debate" outside of the Hofstra venue. During the televised debate, voters were able to see Stein participate in real time using an unprecedented and innovative social media experience presented in partnership with Twitter on Periscope. (http://twitter.com/drjillstein) She also livestreamed her responses via Facebook Live on her Facebook page (http://facebook.com/drjillstein). By 11 PM, the video registered over 930,000 views!

The Stein/Baraka campaign agrees with the 76% of US voters who, according to a USA Today poll, favor four candidates being included in the debates. Voters disagree with the Democratic- and Republican-controlled debate commission that is ensuring their two parties do not have to debate other candidates.

And on Tuesday, September 27, Democracy Now! ( http://www.democracynow.org/ ) will have a live debate between Jill Stein and Libertarian Gary Johnson from 7 AM - 9 AM Central Time.