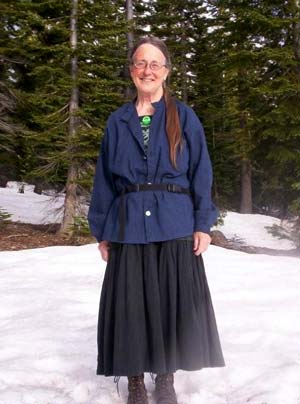 Jody Grage was born in Seattle, Washington, and has been there ever since except for a year living in the mountains in Norway. She lives in Ballard, the part of Seattle where Scandinavians settled, and is a noted Norwegian folk costume expert. The house she lives in was built in 1890 and now includes four apartments. Jody is a retired school teacher and taught in alternative schools, frontline communities, and juvenile hall. She has been knitting since she was five and has knit many green scarves for local and national Green fundraising. She is a vegetable gardener, long-time community activist, member of the Ballard District Council, and determined supporter of the unhoused.

Jody began doing Green Party work in the mid 80's with the Cascadia Green Alliance. She has been active in the Green Party of Seattle and the Green Party of Washington State since their founding and has served in a variety of leadership, administrative, and organizing roles.

She served as a GPUS Steering Committee Co-Chair from 2004 – 2006, as GPUS Treasurer from 2006 – 2010, and was elected GPUS Secretary in 2017. She is currently a Co-Chair of the GPUS Ballot Access Committee and has in the past served on the Accreditation Committee, the Annual National Meeting Committee, the Credentials Committee, and the Finance Committee.

Jody sees the position of GPUS Secretary as a good place to use her energy and organizational abilities to increase communication between and among GPUS and state and local Green Parties, enhance the productivity of the Steering Committee, and get things done.