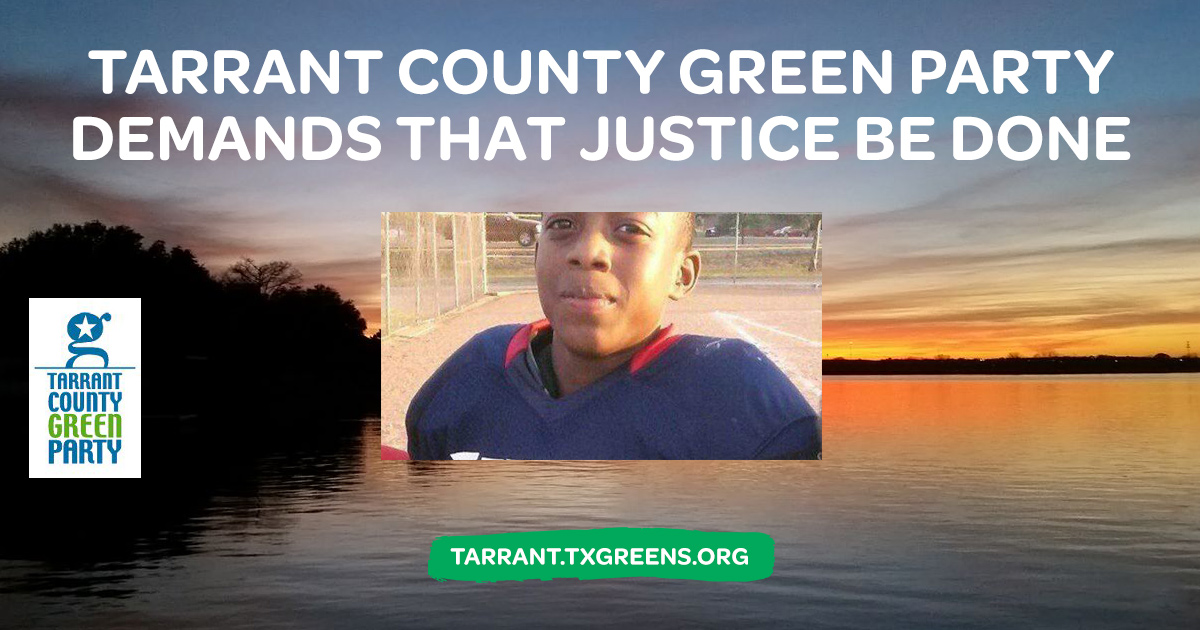 Police violence against black men has struck again in North Texas. This time, Jordan Edwards, a 15 year-old freshman in high school from Balch Springs, a near suburb of Dallas’ southeast side, was shot to death by Roy Oliver, a six-year veteran of the Balch Springs Police Department.

Late Saturday night, April 29, neighbors reported to police that a house party had gotten too loud, and they asked the police to come and check it out. A short time later, Jordan Edwards was shot dead with a rifle.

Reports indicated that Edwards had not been drinking. Neither was he, nor any of the others in the car, including one of his brothers, the cause for the neighbor’s call to police. Neither was he, nor anyone in his party, armed, nor were they found to be in possession of drugs. So, one can dispense with any racist idea that because it was a black kid, leaving a loud party, drunk and disorderly, or that he had it coming to him because of his own actions.

The only thing Edwards was guilty of was “being black while riding in a car.” That’s it, period!

When police chief, Jonathan Haber, first spoke about the incident on Sunday afternoon, he said that the officer had perceived the vehicle containing Edwards being driven “aggressively” in reverse toward the officer. Here the narrative of justification began to spin.

The next day, Monday, presumably because the chief learned more details after his initial report, and at the insistence of the Edwards’ attorney, Lee Merritt, the chief corrected the story, saying that the vehicle had, in fact, been moving away from the officer when he chose to fire the rifle into the vehicle.

As the Edwards family spoke on Tuesday, it was learned that Edwards’ own brother watched Jordan die.

The family, through their attorney, Mr. Merritt, has asked the public to refrain from acts of violence against the Balch Springs Police Department and not to engage in public protests as they prepare for Jordan’s funeral.

The Balch Springs police chief placed the officer on administrative leave and turned the investigation over to the Dallas County Sheriff’s Department. On Tuesday, Officer Roy Oliver was fired.

Jordan’s family and hundreds of their supporters across the nation are calling for Officer Oliver to be arrested on charges of murder. The public is demanding the arrest as well as the release of body-cam footage showing the shooting.

The Tarrant County Green Party stands with the family of Jordan Edwards in calling for the arrest of Officer Roy Oliver.

We stand against all violence of any kind, but we are especially angered and aggrieved by what has become a constant drumbeat of violence against black men, many of them still young boys.

We recognize that at the base of police violence against the black community is an abnormal and enculturated fear of “blackness” in the white community, especially as it pertains to black men. It is an unfounded and irrational, racist construct that has been handed down through generations, whose formation is brought about by the underlying notion of white supremacy.

We reject such social constructs as a political party, and we call for a complete and immediate review of policing in our own communities and others around the nation.

We demand that justice be done, that offending law enforcement officials be charged with the crimes they commit.

We believe that no one is above the law.