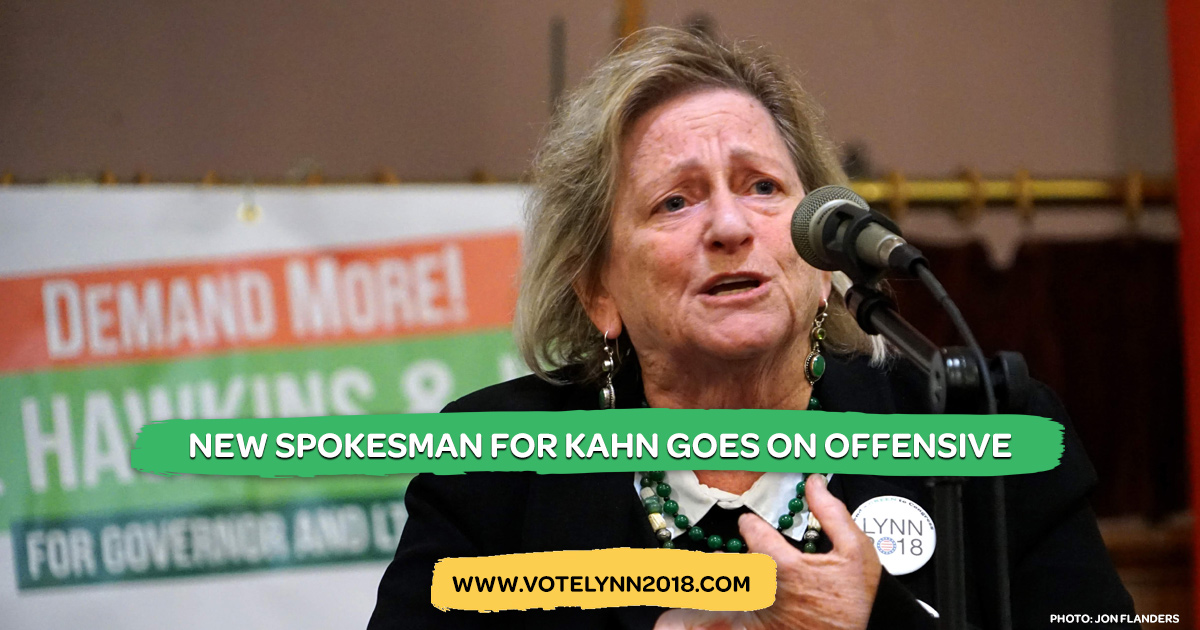 PLATTSBURGH, NY – The temperature is rising in the race for New York’s 21st Congressional District.

Paterakis entered the ring with a flamethrower aimed at squarely at Rep. Elise Stefanik (R-Willsboro) and Democratic candidate Tedra Cobb.

He dismissed Stefanik as the “Kardashian of Congress” and Cobb’s nomination by Democrats as an “early Christmas gift” to her opponents.

Paterakis, an independent, previously served as spokesman for Patrick Nelson, the progressive firebrand who came in fifth in the Democratic primary in June.

Kahn called him a “brilliant, energetic communications expert” with experience working for both Democrats and Republicans, as well as the international business sector.

“He understands their corporate structure and this district,” Kahn said in a statement.

Voters head to the polls on Nov. 6.

Kahn, an organizational psychologist who lives in Schroon Lake, said Paterakis’ arrival will allow her to focus on policy solutions.

Paterakis acknowledged Kahn is an underdog, but believes she has the ability to peel away votes from her two opponents by focusing on a policy-driven campaign during the race's final stretch.

He cited universal health care and the “Off Fossil Fuels for a Better Future Act” as legislation Kahn would support if elected.

Kahn has made relief for the state's struggling dairy farmers, reforming the national foster care system and developing a renewable energy corridor along the St. Lawrence River key campaign issues.

“Dr. Kahn is ready to co-sponsor bills currently in the House and has plans to start writing her own,” Paterakis said.

District voters supported President Trump and U.S. Sen. Bernie Sanders in their 2016 primary contests — and later, Trump in the general election — illustrating a penchant for disruptors the Kahn campaign believes is evidence independents have the potential to swing the election in their favor.

Kahn has embarked on an uneven campaign since entering the fray in March.

The candidate participated in a series of forums and debates during the springtime primary season, which led to exposure across the sprawling district. But since the conclusion of the Democratic contest, the candidate has held few formal campaign events and has occasionally gone dark when it comes to blasting out press statements to promote her campaign.

The Kahn campaign has also shown few signs of traditional grassroots support, including the type of well-attended and energetic campaign rallies the Cobb and Stefanik campaigns held earlier this month.

In contrast, two-time Green Party candidate Matt Funiciello depended heavily on social media to push his message out to followers in the absence of a campaign war chest that would allow for campaigning in the expansive district.

The Green Party does not accept campaign contributions from corporations or political action committees as part of their platform.

Fundraising reports filed with the Federal Elections Commission reveal Kahn has raised $845 as of June 30, lagging far behindCobb and Stefanik.

Paterakis' addition will likely keep Kahn in the public eye.

He has sparred with both Stefanik and Cobb campaign surrogates on Twitter and indicated the campaign would pursue an aggressive approach as the race hurdles towards Election Day.

Stefanik, he said, is a “businessperson masquerading as a public servant.”

“Constituents and reporters have a hard time accessing her for a conversation, but she seems to always be there for a TMZ-style photo op,” Paterakis said. “I would bet she also has never had any milk in her cereal.”

Paterakis noted Cobb called him a “troll” for his attempt to steer the candidate into taking Nelson’s pledge to not accept corporate PAC funds during the primary cycle.

Cobb has shied away from discussing policy specifics since emerging victorious from the five-way primary contest in June, instead opting to highlight the votes taken by Stefanik she contends are harmful for the district, including the lawmaker’s vote to repeal Obamacare last May.

Cobb, a former St. Lawrence County legislator, has said she supports the concept of single-payer health care, but has not endorsed a specific solution, citing the need for congressional hearings, protocol she believes has been neglected under GOP leadership.

“Every person should have portable and affordable health care,” said Cobb earlier this month. “Medicare for All is an option, and it is one we should explore. We could explore Medicare and an expansion of the (Affordable Care Act).”

“Perhaps she will get her health care solution from an episode of General Hospital,” he said.

Greens, however, still lack the type of traction needed to win elections, he said.

It's standard practice for Green Party candidates to go after both parties.

But the post-2016 landscape is altering the political dynamic, he said, softening the lines between Democrats and Greens who are beginning to feel more comfortable with aligning themselves with a party that is increasingly being pulled leftward and embracing their values.

“There’s this tension that will inevitably come to fruition,” Minkoff said.

The Cobb campaign, who bolstered their own communications team last month, did not respond for comment.

But campaign spokesman Brian Phillips, Jr. said “no longer can voters afford to waste their time reading petty attacks, false comparisons and twisted narratives” in response to an attack the Stefanik campaign levied on Tuesday accusing Cobb of "making Medicare more expensive for seniors while enrolling herself and her family in the county’s taxpayer-funded health plan.”

Cobb was among the St. Lawrence County legislators who enrolled in the county's health insurance plan in Aug. 2009.

Lawmakers voted three months later that new retirees in the county’s retirement system would no longer be able to receive reimbursement increases after Dec. 31, 2010, according to official minutes.

The official reason was the county was “not in a fiscal position” to continue to provide the increases for retirees and their spouses.

But there's no indication the decision reduced benefits from other enrollees in the program, or was related to lawmaker enrollment in the county's health care plan.

The Stefanik campaign did not address Paterakis' broadsides against the lawmaker, but opted to renew previous attacks against Cobb.

“While the Stefanik campaign may occasionally disagree with Dr. Kahn's campaign on specifics, we both want the same thing for the North Country: a vibrant public sector where our farmers and small businesses can prosper, a stronger environment to protect our future generations, and a more honest, substantive conversation about the challenges we face,” said Lenny Alcivar, a campaign spokesman.