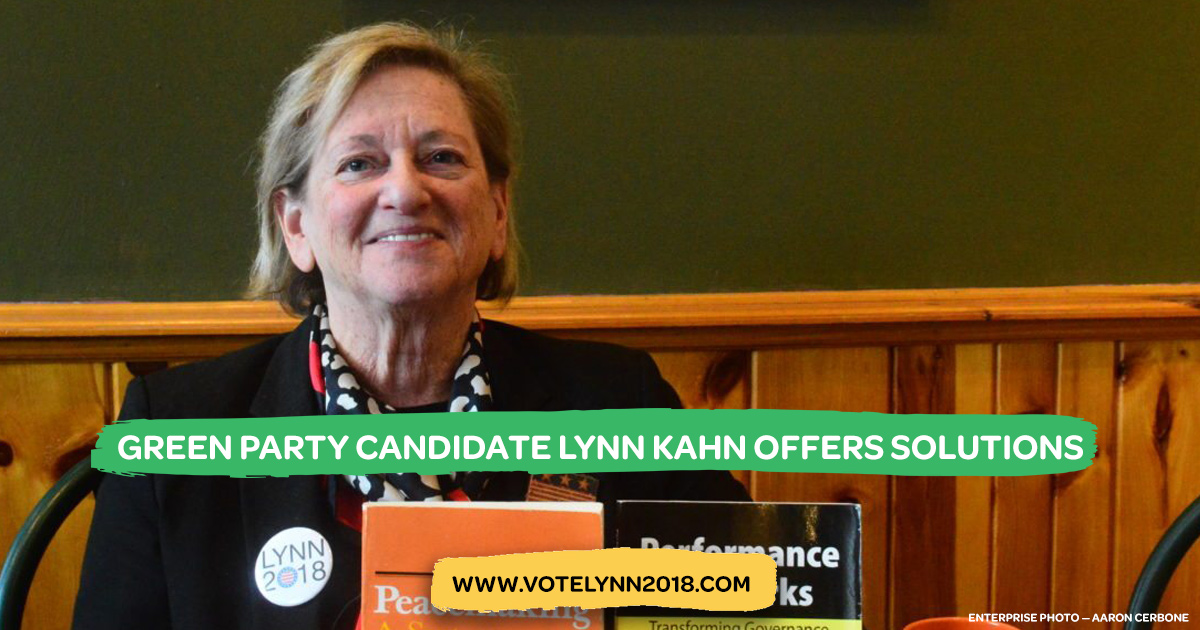 SARANAC LAKE, NY — Lynn Kahn does not have enough time to tell you everything that is wrong with the federal government, but she'll certainly try her best.

The congressional candidate from Schroon Lake running to represent New York's 21st District on the Green and Independent party lines has spent decades reorganizing departments in the federal government, writing books on conflict management and running for the office of president of the United States.

A clinical psychologist, she found herself in organizational psychology for 32 years, rewriting mission statements, setting up tangible goals and implementing programs and rules to reach those goals.

Kahn believes there is $1 trillion in federal agency waste implementing programs that do not have results. She said she is the most qualified congressional candidate in the country to eliminate that waste and put it toward helping the American people.

She said the U.S. Department of Education, for example, has spent $30 billion in programs that do not work while students are not taught how to balance a checkbook or institutional racism in government.

She helped reorganize airspace use at the Federal Aviation Administration and justice reform in the Department of Juvenile Services. She describes herself as the "opposite of a bureaucrat," focusing on tangible improvements in agency services rather than paperwork and statistics.

When she was campaigning for presidential election she attained the nickname "The Government Mechanic" at the 12 independent debates she attended for her ability to look "under the hood" of politics to find the root cause of a problem.

Though Kahn wants to be first Green Party member of Congress, she does not agree with the Green platform completely, criticizing the party for not having clear goals and plans to reach them.

Initial reactions to her campaign announcement from Democrats on social media labeled her as a "spoiler" for the party and accused her of stealing votes from Democratic candidates. Kahn believes she is bringing more voters to the race, giving them a chance to vote outside of a corrupt system.

"I think Democrats and Republican are bought and sold by corporate money," Kahn said. "That's Big Money dictating what kind of a republic, what kind of a democracy we are going to have. When Big Money controls out policies and our legislation, Big Money is the winner and we the people are the losers.

"The corporate-funded two major parties are destroying our republic, are damaging so many people, are lockstep marching us toward real, shooting wars. I remember the draft," she added, "vaguely."

The bickering of the two major political parties is what she believes keeps politicians from making important and beneficial changes for the American people. Her two books, "Peacemaking: A Systems Approach to Conflict Management" and "Performance Networks: Transforming Governance for the 21st Century," focus on how to change this, specifically, within government.

On one of the most controversial and divisive modern political issues, abortion, she did not give her view on the topic itself, instead focusing on each side's common goal of preventing unplanned pregnancy in women and girls.

Making birth control cheap (or free) and widely available could reduce abortions immediately by 40 to 60 percent, she said, citing a Colorado program that saw a 64 percent decline in the teen abortion rate in eight years.

When asked what keeps this solution from being implemented, Kahn tapped her stack of books, "If you can't talk about it face-to-face commonly, and really listen to people with different points of view then you can't solve these problems," she said.

She added that the government could further reduce that percentage — and the rate of sexually transmitted diseases in teens — by properly educating kids in school about how pregnancy happens.

While abortion is certainly an important topic for many voters, Kahn wants to apply her methods to the issues that the North Country needs improvement in the most: health care, the economy and veteran services.

She has written at length about the problems plaguing the Department of Veterans Affairs, and how it needs to refocus its mission. The Department of Defense, she said, sees numbers not people, and measures success in paperwork — like how many benefits were approved and how many benefits were denied — instead of reduced numbers of veteran suicides.

"'To care for he who has borne the battle, his life and his orphan' was fine in 1860. In 2018, change the mission," Kahn said. "I'm proposing 'Deliver world-class services and benefits to veterans and their families.'"

When Kahn traveled the nation talking with Americans as an Independent candidate for president, she said she saw a pain and hurting in U.S. citizens she had never been exposed to before. President Donald Trump's use of the term "carnage" in his inaugural address was criticized for being exaggeration and overly negative, but Kahn said she thinks it is a proper term.

She said the failing of departments in the federal government has hurt individuals' jobs, health and their children.

On the campaign trail in Iowa she attended a Family Preservation Town Hall where she heard from parents and grandparents who told of how the state took their children and grandchildren with no evidence and placed them in foster care.

Kahn wants to devote a special focus to family law reform, and fixing what she called "state-sponsored kidnapping" in a for-profit foster care system that pays $50 billion per year in federal money to states that take children and place them in stranger's houses.

This is another subject she has written extensively on, citing Connie Reguli, a family attorney and previous county prosecutor, in an article she wrote for Democracy Chronicles.

"Ninety-five percent of the time when state agencies take children away from families, the accusations turn out to be false or unsubstantiated," her article reads.

She said states, including Iowa, Arizona, Kansas and Alabama take newborns from hospitals on the basis of an unwarranted drug test that could have a false positive, with no warrant, court order or evidence of potential for future abuse.

She has returned to Iowa several times to talk with parents again and write more about the subject.

Kahn sees a lot of problems in America today, and wants to solve them in Congress.