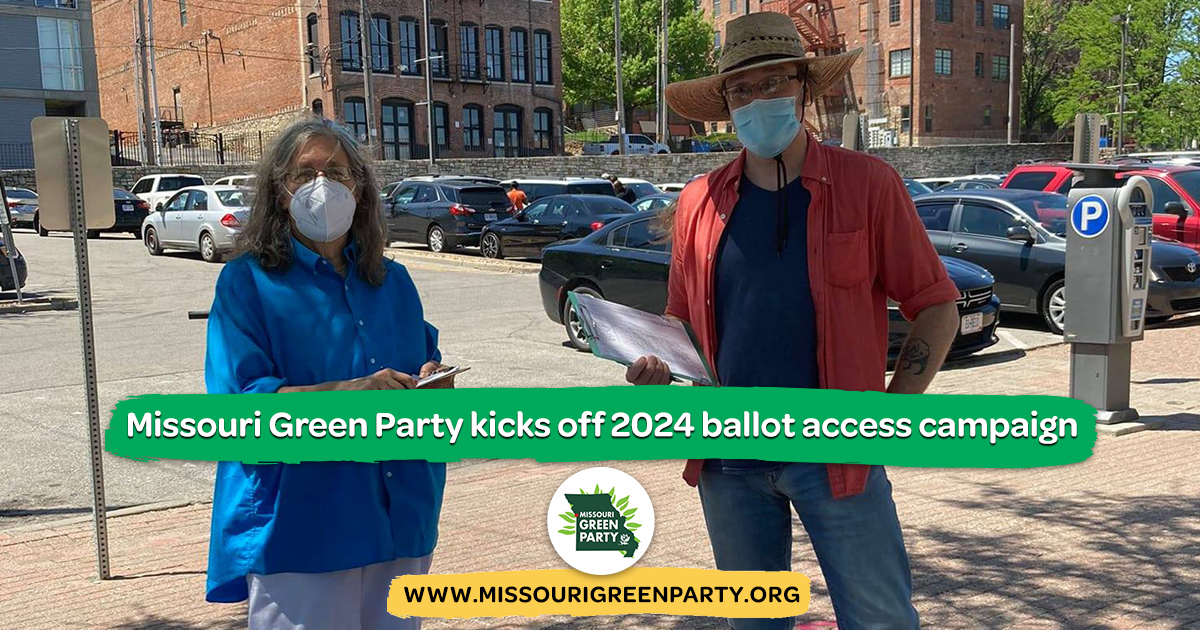 ST. LOUIS – Last year, the Missouri Green Party turned in over 10,000 signatures to the Secretary of State’s office to regain statewide ballot access,but fell just short of achieving that goal.

Undeterred and now informed with lessons learned from the 2022 campaign, the Green Party is poised to bring back to Missourians candidates who will represent them as opposed to wealthy donors. Volunteers have until July 2024 to submit enough signatures to qualify to run Green Party candidates statewide.

Statewide Ballot Access Campaign Coordinator, Nathan Kline says, “the need for a political alternative in Missouri that is not for sale to corporate interests is greater than ever.  With most of our political districts gerrymandered to be overwhelmingly Democratic or Republican single-party districts, Missouri voters too often only have one candidate per office to vote for in the general election,” Mr. Kline continues.  “More competition, leads to better results, and the Green Party is committed to expanding political choices and policy options to the toolbox of Missouri governance in 2024”.

With Democrats and Republicans taking money from the same wealthy donors, both maintain the status quo that allows the market to determine who has access, and at what cost, to the necessities of life such as healthcare, housing, and education. The Green Party and its candidates refuse to accept money from these corporate interests and offers a much more robust governmental response to these and other areas where the market often falls short for many Missourians.

With many and perhaps most Missourians frustrated with pay-to-play politics in Missouri, the Green Party seeks to offer an alternative that could shake up business as usual.

If you can help with this critical campaign in any way, please contact us right away: