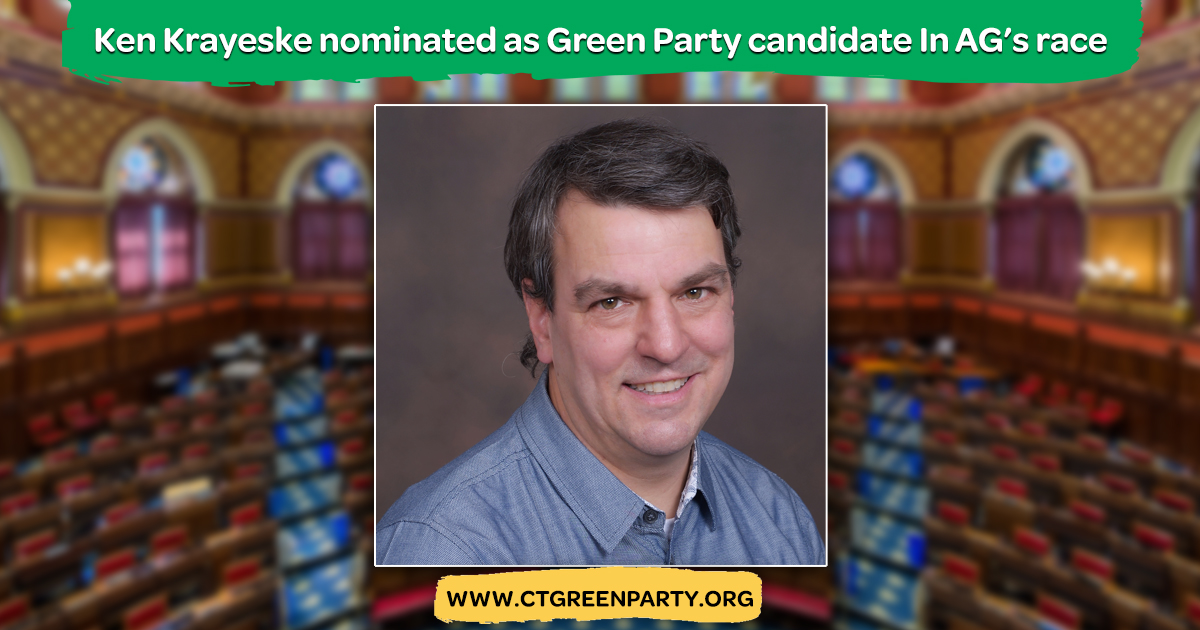 New Haven-based attorney Ken Krayeske was nominated Tuesday by the Green Party of Connecticut to run for Connecticut attorney general. That means for the next 60 days there will be three candidates on the ballot in the election for attorney general: Democratic incumbent William Tong, Republican Jessica Kordas, and Krayeske.

In a press release announcing his nomination, Krayeske touted his victory against the state that required all inmates to get access to Hepatitis C treatment.

As a result of the lawsuit, the Department of Correction spent $40 million testing about 20,000 people and curing 1,010 of Hepatitis C.

"When we use the law to lift the health care of lowest rung of the societal ladder, we take one step closer to medicare for all," Krayeske said. "I encourage the voters of the state to imagine what could be possible if someone like me won the AG seat."

Krayeske also helped secure a $250,000 settlement from the DOC for Tiana Laboy, a Black woman who gave birth in a prison toilet, in which the attending nurse commented "the baby took her first swim." Another hard fought lawsuit resulted in $1.3 million for Wayne World, a Black man in DOC custody, who was told his stage IV cutaneous t-cell lymphoma of an aggressive subtype was merely psoriasis. He was released before he died, but he was not diagnosed until his skin was melting off his body.

Krayeske is no stranger to the Green Party.

In 2006, he helped Cliff Thorton secure the ballot line for governor then at the end of the campaign season when Republican Gov. M. Jodi Rell had won; he was arrested taking pictures of the inaugural parade.

Krayeske was held on $75,000 bond for 13 hours on misdemeanor breach of peace charges, which were later dropped.

"The false arrest litigation showed me the Attorney General's office is not all about suing corporations on behalf of the state," Krayeske said. "I saw how the AG's office bends the law to defend unconstitutional conduct. This run challenges the AG's office to transform its litigation practices to protect people from law enforcement abuses."

Krayeske said he's running to stop those types of abuses of power.

"The 2006 Green platform of ending the war on drugs, legalizing cannabis, ending American militarism overseas and at home, improved education from universal pre-k to free college tuition, universal health care, increased mass transit and investment into public infrastructure had broad support 15 years ago, and remains popular with the people of Connecticut today," Peter Goselin, one the Green Party of Connecticut state co-chairs, said.

"This year, we hope citizens of Connecticut will vote in large numbers to help build new alternatives to the two party system, where one of the parties has taken a hard-right authoritarian turn, while the other serves only the interests of the wealthy." Goselin said.

Krayseke said he would make sure the attorney generals office fights for the people of Connecticut if he was elected.

"The AG's office has a long history of working against the people and for state power at all costs. We can change that," he added.

Neither Tong or Kordas' campaign responded to requests for comment on what is now a three-way race.

Both Tong and Kordas have qualified for public financing. The threshold Krayeske would need to reach makes it almost impossible this late in the campaign season to achieve, so it's unclear how much capital he will have to run the race.