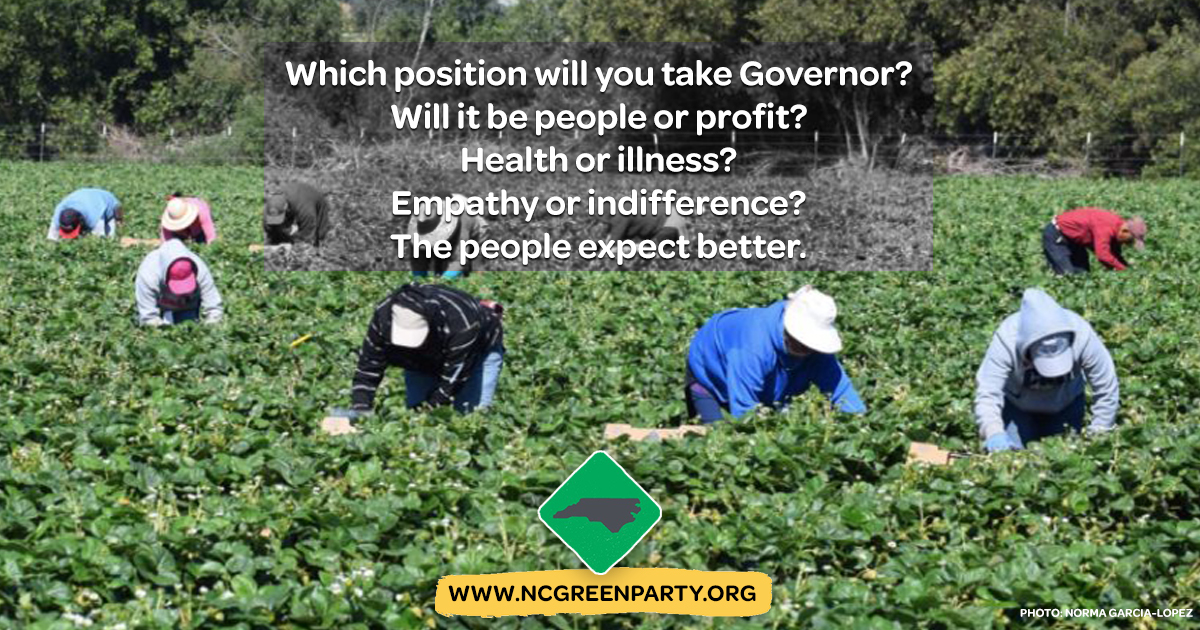 NCGP to Governor Cooper: Farmworker Safety During the Pandemic Is More Important Than Profits

In April of 2020, a letter was sent to you from the North Carolina Farmworker Advocacy Network (NCFAN), which is a coalition of organizations working to improve the living and working conditions of agricultural workers. In this letter, you were asked to use the power of your office to issue an executive order that would help to protect agricultural workers during the pandemic. In particular, NCFAN requested that you instruct agribusinesses to:

These are not onerous requirements. As NCFAN has pointed out, you previously publicly committed to issuing this order, as reported in the News and Observer on August 14, 2020. Comparable orders have been issued in Michigan and Wisconsin. In fact, in 2016, long before the pandemic, both Attorney General Josh Stein and yourself told the NC Latino Congress that, once in office, you would work toward “improving the state’s ability to provide culturally and linguistically appropriate health and human services to North Carolina’s growing Spanish-speaking community.”

However, upon signs of resistance from the NC Department of Labor and Department of Agriculture, you quickly rescinded the commitment to the executive order. Both of the heads of these offices are Republicans, and both are themselves committed to protecting business (including large farmers and agribusiness) from any legal responsibility to protect workers beyond the bare minimum dictated by law. Since Republican legislators have spent the last decade reducing that responsibility, your office had an opportunity to begin to reverse the damage of laws created to benefit employers over employees. It should have been an easy decision to inform commissioners Berry and Troxler that their resistance to your order was not in line with the needs of the farmworkers in North Carolina, and that your administration, and the attorney general’s office, was quite prepared to enforce this order. As has been pointed out by North Carolina Justice Center in an article in the Greensboro News and Record on September 10, 2020, many businesses would have complied with your order regardless of the positions of the commissioners.

The failure to issue the order is a betrayal of North Carolina farmworkers, and it calls into question your intent to govern on behalf of all inhabitants of the state. Farmworkers, with or without visas or other documentation, are used by agribusiness to make profits. COVID-19 disproportionately affects people in black and Hispanic communities. For Berry and Troxler, despite the high-sounding rhetoric, these people are disposable, whereas the profits of agribusiness are indispensable. We must ask, which position will you take Governor? Will it be people or profit? Health or illness? Empathy or indifference? The people expect better. 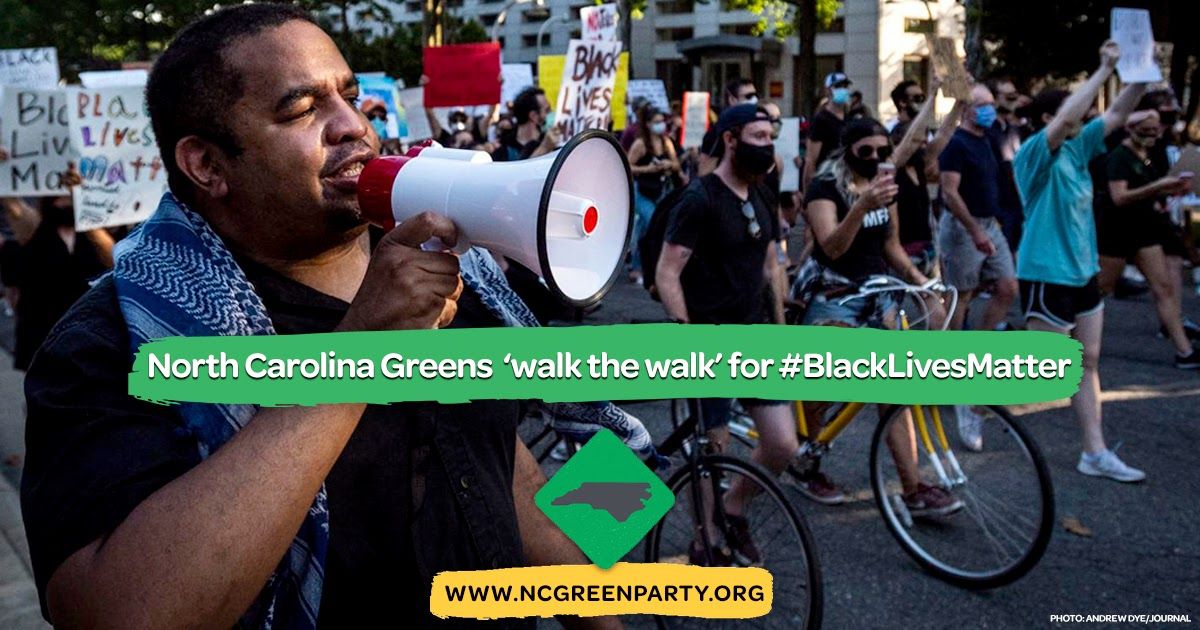 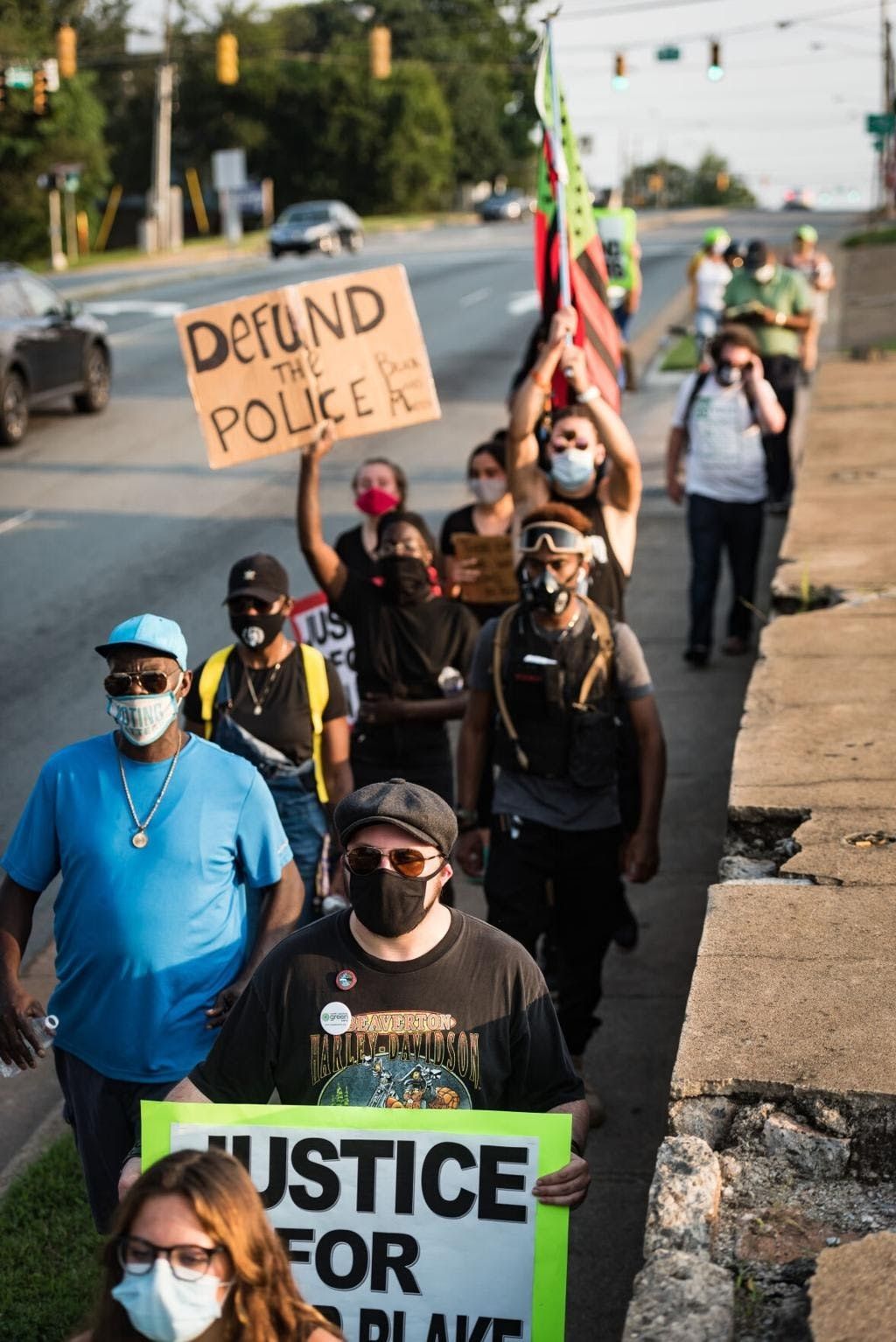 Let's get out the vote for Green Party candidates Howie Hawkins and Angela Walker! We can ensure automatic ballot access through 2024 for the NC Green Party by winning at least 2% of the votes for president in 2020 in North Carolina!

VOLUNTEER! There are many ways to help get out the vote for Howie and Angela. We need volunteers: 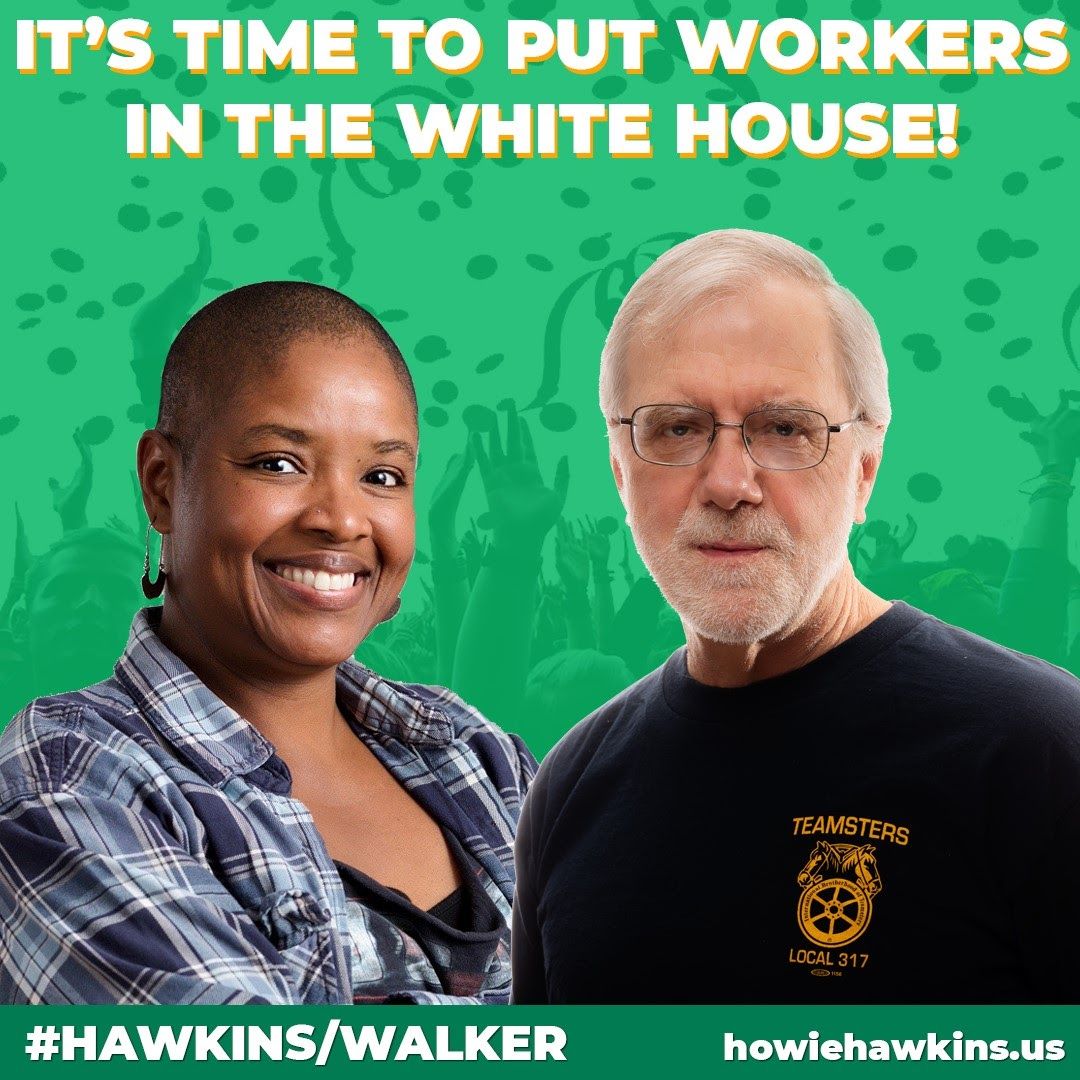 Even volunteering an hour or two will make a tremendous difference. Join us for our statewide campaign meetings on Wednesday nights on Zoom to learn how you can help. Please register in advance for these meetings and sign up to volunteer!

More and more voters are realizing that the two corporate parties have failed us. The Hawkins/Walker ticket represents real change in this country. While every candidate says that, the Green Party’s platform proves our commitment to broad sweeping system change to improve the lives of the working class, especially oppressed groups, as well as our environment. Our votes come from people who want something different and have no faith in continuing the same failed strategies; they're people who are fed up with our undemocratic electoral system and the corporate parties’ failure to protect and serve its citizens.

None of our most urgent problems will be significantly addressed by either a President Biden or a President Trump. Voters overwhelmingly support Green Party positions like:

It is critical that we take a stand and not only vote for our future and the future of new generations but also, most importantly—organize for a new mass party, not vote for our fears and hope for the best. The tactic of Lesser Evilism has not worked in over a century of attempts to reform either big-business party, and it certainly won’t work for us in 2020 or for the future of people or our planet.

Donate to Our NCGP Campaign Drive!

We're raising $7,500 to get out the vote for the Howie Hawkins and Angela Walker presidential ticket in North Carolina and to increase NC Green Party registration! Our goal: win at least 2% of the vote for Hawkins/Walker in our state. Two percent means the NCGP automatically retains its ballot line for 4 more years to run Green candidates. Otherwise we may lose ballot access for several months or longer, and we will be required to collect several thousand petition signatures.

DONATE NOW to help us organize for H20—and to build the North Carolina Green Party. The two major parties have utterly failed the people and the planet. Help us build our own political power independent of the two capitalist parties!

Your donation will be used for:

The North Carolina Green Party refuses all corporate contributions, so dues-paying members play a vital role ensuring our state and local organizations have the resources needed to build an independent party for people and planet free from the influence of the 1 percent.

Who can Become a Member of the North Carolina Green Party?

North Carolina residents who are registered to vote as “Green” are eligible to become members of the NCGP after they have affirmed Green Party principles (see our 10 Key Values and Platform), set their own dues rate using a budget-friendly sliding scale, and initiated payment of those dues. You choose your own dues level on the honor system, based on what you can pay. Note: Residents who are ineligible to vote due to state disenfranchisement (including but not limited to reasons such as age, criminal record, or noncitizen/undocumented status) may also become members. Email the NCGP secretary at secretary@ncgreenparty.org if you feel you are ineligible to vote due to state disenfranchisement. All NCGP members, with the exception of noncitizens, shall pay modest annual dues.

Find Us on Social Media

Join our statewide and regional NCGP Facebook groups to connect with Greens:

In solidarity with people and planet against profits,