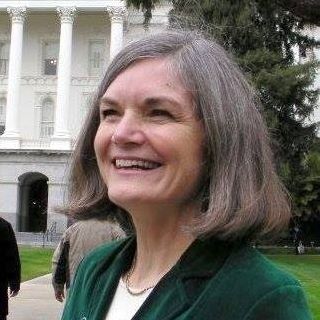 Laura Wells' political activism kicked into high gear in 1992 in an unexpected way. A friend told her, "I had a dream you were in politics. You should check out the brand new Green Party."

Laura found a political home in the Green Party. She appreciated the recognition that the problems facing everyone were interrelated: peace and non-violence, the environment, wealth and poverty, and social justice. She saw that real justice was up against all the "isms" of society. She liked the fact that Greens put principles into practice by never accepting corporate money, or developer money either, since developers bought government at the level of cities.

Having worked for years as a trouble-shooting systems analyst, the recognition that solutions are also interrelated appealed to Laura. It was like a principle of permaculture: no single problem or solution stands on its own. Laura wanted to be a part of bringing in solutions, to positively affect the future of all beings, definitely including her 8-year-old daughter.

In 1992, Laura voted for Bill Clinton for president and within a year felt betrayed when Clinton and Gore got NAFTA passed, a terrible act for people and the planet. (Laura agreed with the Green idea that everyone should mail Gore their copies of his book Earth in the Balance and say, "Great book, you should read it!") Clinton and Gore took billionaire money and gave the billionaires a great return on their investment with that trade agreement.

Also in 1992 the country's glorification of Columbus' "discovering" America fizzled because of the consciousness-raising "500 Years is Enough" movement. Within a few years she organized with "50 Years is Enough" to point out that the World Bank was not at all successful in its stated goal of "reduction of poverty."

Since registering Green, Laura has served in a number of leadership positions at the county and state levels of the Green Party of California. She was a founding member of the Green Party County Council in Alameda County and a co-founder and managing editor of the state's Green Party newspaper, Green Focus.

In 2014, Laura ran for California State Controller on a platform of creating a State Bank of California, that invests in the residents of our state not Wall Street. She also focused on tax reforms that implement fair and progressive taxation policies. After the global economic meltdown, Laura ran for Governor in 2010, on a platform of repealing Proposition 13, which directed the majority of "tax relief" to giant corporations and not individuals.

She was arrested upon attempting to enter the building to watch the 2010 Gubernatorial debate, which excluded all third-party candidates; the charge was "trespassing at a private party."

Laura also ran for State Controller in 2002 and 2006, receiving over 400,000 votes in 2002, the most ever for a Green Party candidate in a statewide partisan race in California. She served on the executive committee of the Instant Runoff Voting for Oakland's 2006 campaign while also running for State Controller, helping secure support for IRV from local representatives of most political parties in Oakland, including Greens, Libertarians, Peace and Freedom, Republicans, and Democrats, Laura was instrumental in IRV being approved.

Laura was born and raised in Michigan. As a scholarship student, she earned her BA in foreign languages from Wayne State University in Detroit in 1969, and was elected to the Phi Beta Kappa society. Laura went on to earn a Master's of Education at Antioch University, and lived in Boston, Massachusetts for ten years working in finance, computer programming, and systems analysis. In 1992 Laura switched to working with nonprofits such as Pesticide Action Network and Women's Economic Agenda Project, and other sectors such as schools, labor unions and county government. For the past 30+ years Laura has lived in California, and has been an Oakland resident since 2000.