The Green Party of Florida Slate 2018, laying the Foundation 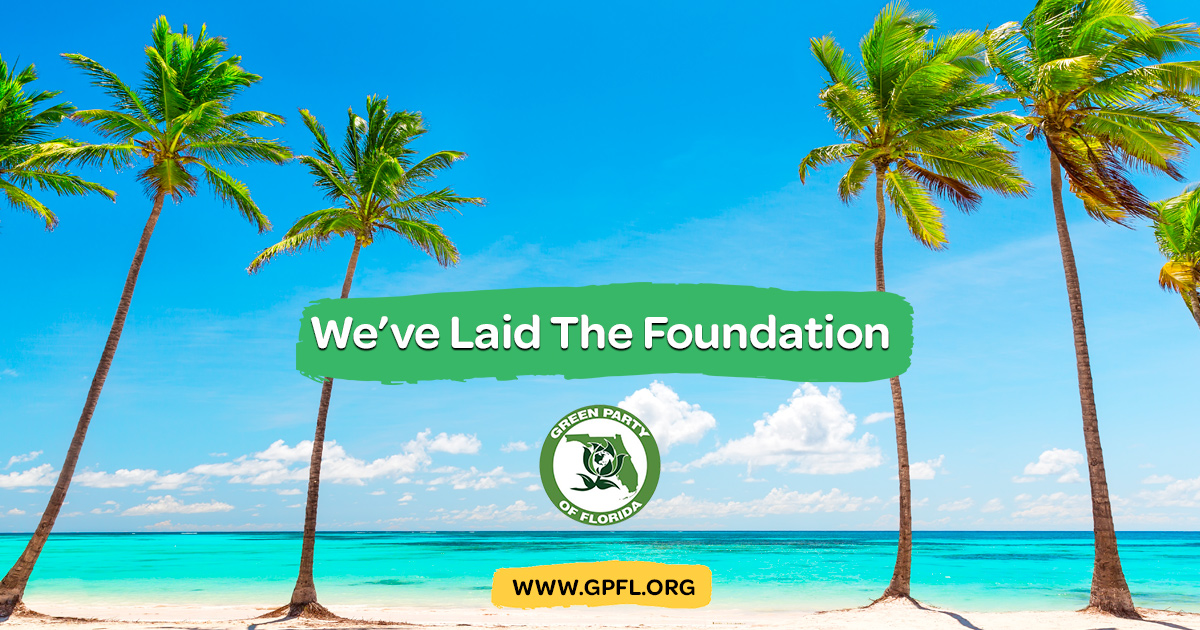 In reporting on the Green Party of Florida (GPFL) election results for the August 28, 2018 primary, we reported that Elijah Manley got 43,000 votes (18.49%) for Broward County at-large School District 8 and Robin Harris netted 4,720 votes (24.8%) for Orange County Commission District 6. We remarked:

"To put it simply, this year's numbers show that where Greens run and run hard, they now represent an identifiable voting bloc that duopoly candidates can only ignore at their peril. They call that power."

Now, in the November 6 Florida general election, the party continues to build on that. Samson LeBeau Kpadenou, a co-founder of Black Lives Matter of Palm Beach County, received 4,413 votes (15.5%), against the millionaire who would have otherwise been an unopposed incumbent Democrat, David Silvers.

Then, in a stunner, Francisco Pierre-Louis wrested 115,358 votes (31.01%) from two other contenders, taking second place in a field of three. Francisco spent a grand total of $0 on his campaign.

In 3rd party politics, when the independent doesn't actually win, the first thing the analysts look at is whether the independent's total votes is greater than the margin of victory between the two major-party candidates. The Green numbers all fall in the "real damage" range. There are other measures of success.

Just do the math

"With his corporate coffers running over, there was no way that my opponent, millionaire David Silvers, was going to lose this race," charges Kpadenou. "He nonetheless raised $150,330 — from the likes of Disney, Duke Energy, developers, police and fire associations, on and on — to defeat me, Samson LeBeau Kpadenou. I received my approximately $10,000 from real people. Silvers outspent me 50 to 1 after the August 28 primary. That's better than $6.25 dollars per vote, while each of my votes only cost two bucks. Somebody's got to be wondering whether they got their money's worth!

"If that's not bad enough, then Silvers goes and steals my issues!" Kpadenou chuckles. "And you know what? I couldn't be more delighted. Since when did he care about affordable housing, one of my main issues? Then he starts talking up climate change. The only time he ever worried about climate change was when he couldn't get somebody fast enough to fix his air conditioner's broken thermostat."

November Edition. One constant lament that independent parties cling to is that they have a great platform, but somehow, that doesn't translate into votes. It's like complaining that the multi-zillion corporate media industry systematically shuts out independent voices, AND they aren't playing fair.

"Of course they aren't playing fair," says Kpadenou. "That's who they are, and that's what they do. So we don't just settle for getting some votes. From the git-go, one of our main goals has been to build campaign organizations. When we started our campaigns this year, we were essentially starting from scratch. We had to build our operations brick-by-brick. Next time around, we will have the foundation of experienced teams already in place, teams that know the ropes. We can fight the campaign professionals, running on corporate dollars, with our own kind of professionals — grassroots professionals — fueled by the power of the grassroots.

"We did well in four counties this year," he points out. "Next year, without the distraction of statewide races, we can focus on the county and municipal offices that are going to be up for grabs. Mayors, city councils, county commissions, school boards, all those offices. Our experience means we can continue to build where we have been building. It also means that when a group of Greens wants to enter the fray in a county where we don't currently have a Green Party local, they will be able to draw on the expertise we have been gaining this year the hard way — by earning it."

… and one of the things that is falling apart is the Democratic Party. In Florida, Andrew Gillum ran as an unabashed progressive in the primary. But the day after he won the primary, he started 'toning it down,' distancing himself from Tim Canova, who was running as an independent for Debbie Wasserman-Schultz's seat. He ran arm-in-arm with Senator Bill Nelson, who had played a key role in gutting Obamacare. He and his professionals were realists. They wanted to make sure that he would win. And Gillum lost. Nelson lost. Taking down most of the Democratic slate with them."

In any event, the Democrats can now argue with each other over who's to blame. Meanwhile, things have been happening. The Democratic Socialists of America (DSA) is an organization claiming over 50,000 members. They are socialists, and have traditionally aligned with the Democratic Party. But they are not a party, or even an explicitly electoral organization. In all four of this year's featured GPFL races, DSA endorsed our Greens.

Organize Florida, "a community-based, nonprofit member organization of low and moderate income people dedicated to the principles of social, racial, and economic justice and the promotion of an equal and fair Florida for all," endorsed both Robin and Francisco.

SEIU has been a bulwark of the Democratic Party from time immemorial. In Orange County, they came to Robin Harris on their own initiative, and offered their endorsement.

History is on our side

The pieces are starting to come together. Candidates. Issues. Organization. And one of the most significant characteristics of this year's campaigns was that our candidates did not get the results by "toning it down."

As the GPFL takes out what it has built this year, and brings it to more and more counties, hundreds of thousands of Floridians, and then millions of Floridians will have a real choice. And by "choice," the GPFL means making that choice something more than just some existential abstraction. A choice is something that makes a difference. Kpadenou states:

"Mothers and fathers fearing that the bipartisan drive to war and empire will put their children under threat of nuclear holocaust or death in lands where they have no business … will have a choice.

"Poor and Black and Latino families, facing the bulldozers and the developers and the gentrifiers, wondering where they will live next if they are forced out of their long-time neighborhoods … will have a choice.

"Those wondering if next year's hurricane season will bring death and destruction, with nowhere to run … will have a choice.

"Parents wondering whether every time their children step outside the door they will hear that knock on the door of a police officer notifying them that their children will not be coming home … will have a choice.

"The sick and the elderly, watching their Social Security and healthcare being gutted in bipartisan deal-making … will have a choice."

But they will only have those choices if we do the hard work of making them happen. So Do the Math!