Meet Howie Hawkins and learn about RCV in Indiana 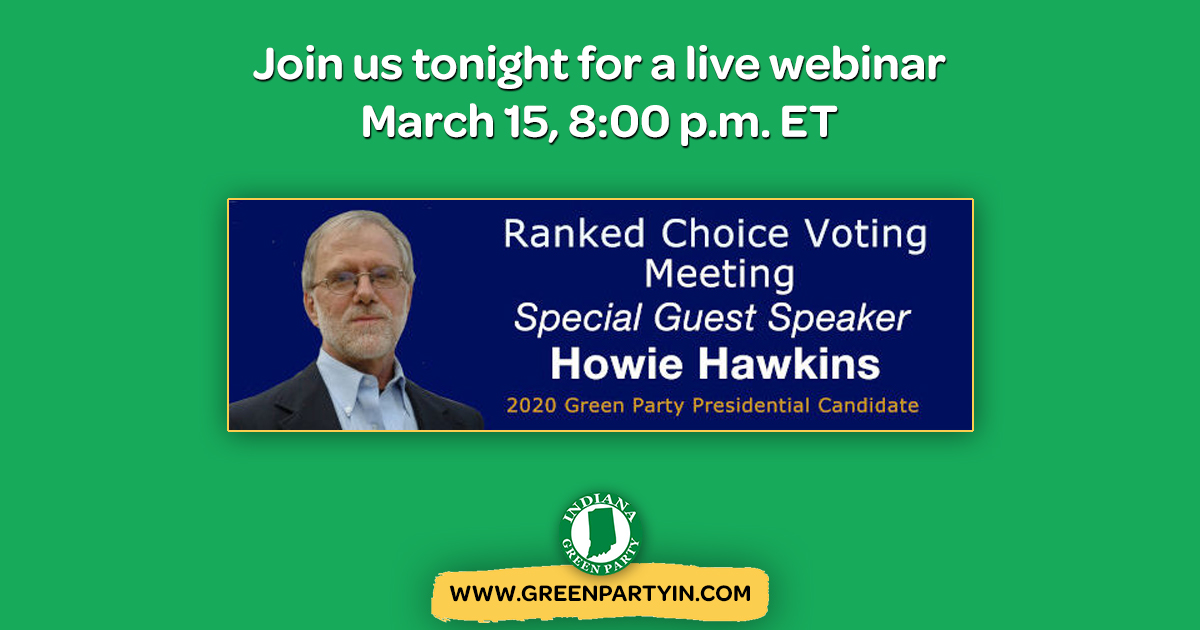 Howie Hawkins is coming to the Better Ballot Indiana meeting tonight at 8pm ET! Howie is joining to inspire and share his knowledge of Ranked Choice Voting (RCV) and organizing.

The Indiana Green Party RCV Committee has endorsed and partnered with this nonpartisan group. Sign up to receive the Zoom info for the meeting tonight and come chat with Howie and learn what you can do to bring RCV to Indiana!

Once again, the Ranked Choice Voting bill that was filed in the Indiana Legislature went completely unheard. This has happened for at least 5 years now. We appreciate Representative Sue Errington for submitting House Bill 1216 which would have permitted a municipality to implement RCV for local elections, but we must go further.

Ranked Choice Voting would be so beneficial to our democracy that cannot delay in establishing its use statewide, and ultimately nationwide.

Ranked Choice is a change to the way that we vote. In our current system, you pick one candidate. With Ranked Choice Voting, you vote for multiple candidates, in the order that you prefer them: 1st choice, 2nd choice, 3rd choice, and so on.

RCV solves a very big problem in our elections — the problem of vote-splitting and spoiler candidates. Under our current system, if you vote for a less popular candidate, you risk throwing your vote away. Or worse, you might help elect the candidate you like least, because you are not voting for a front-runner who can beat them.

With Ranked Choice Voting, you can vote honestly for your true first choice and perhaps a front-runner as a backup choice. If your first choice doesn’t have enough support, your vote transfers to that backup. Your vote is never wasted.

The key benefits of Ranked Choice Voting include:

RCV is already used statewide in Maine and Alaska, and it’s used locally in many cities, including New York City. Several countries around the world also use RCV, such as Ireland and Australia.

Ranked Choice Voting has a proven record of strengthening democracies.

Currently, US House Bill 1 (HR1) is a massive reform that claims to restore faith and integrity in our elections. While portrayed as a way to get money out of politics and to protect voters, there’s a catch- the bill would quintuple the amount of money presidential campaigns are required to raise to qualify for federal matching funds.

As National Green Party Co-Chair Gloria Mattera said, this legislation “claims to improve access to voting while actually dismantling everyone's right to organize electorally … HR1 must be amended to stop this attack on presidential campaign matching funds that Green candidates have relied on for almost a decade — or the bill must fail.”

We must reach out to our representatives and demand HR1 be amended to remove the “poison pill” legislation that would actually make it more difficult to participate in elections. Instead, we should deliver real reforms to democratize our elections, such as:

The Indiana Green Party has officially endorsed Better Ballot Indiana, a non-partisan 501(c)(3) nonprofit dedicated to researching and educating fellow Hoosiers about the benefits of RCV. We encourage volunteers to reach out to us and/or them to get involved with direct action towards informing others and bringing RCV to all of our elections in Indiana.

Join us tonight at 8pm ET via Zoom to meet the team and see where you fit in. We need your voice in this historic effort!

Register Now to receive login information for the meeting, and share the event on Facebook to help spread the word about RCV coming to Indiana.

See you tonight with Howie,