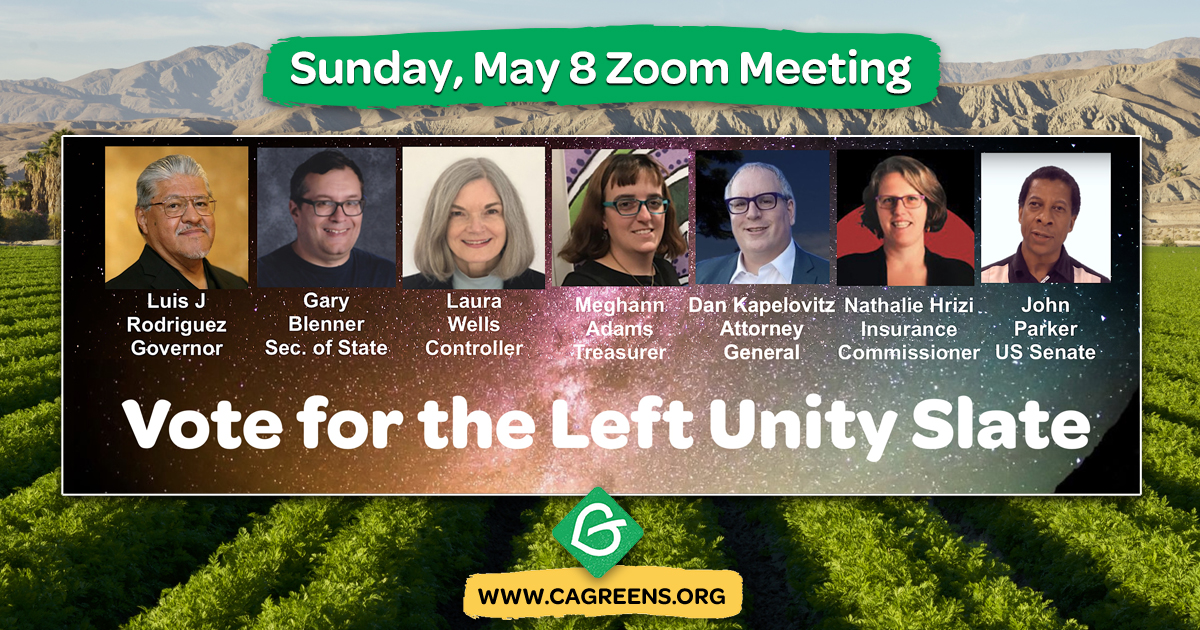 Members from the Green Party of California and the Peace and Freedom Party have joined together to create a Left Unity Slate of statewide candidates for the upcoming June 7 election.

Sunday, May 8, members of the Left Unity Slate and other candidates will join us in a zoom gathering to discuss their campaigns, the strategy of Left Unity, the upcoming election, and politics in California and beyond. Join us and learn how you can support these candidates. The Meeting's Zoom link is HERE.

Meghann Adams has been a tireless organizer of anti-war and anti-racist actions in the San Francisco area for fifteen years. She has been a school bus driver for 7 years, active in SMART 1741, the union representing school bus drivers in San Francisco and San Mateo Counties. She was elected president of the union last year. Active in many community organizations over the years, she has served as treasurer of campaigns, and now is running for California Treasurer to represent working people. Her campaign slogan, "End Poverty in California," hearkens back to the Upton Sinclair campaign of 1934. Sadly, the slogan is as appropriate today as it was 88 years ago, with more Californians lacking housing today than at the height of the Great Depression. A socialist, Meghann Adams considers capitalism the reason why poverty is still so common today.

Gary Blenner comes from a long family tree of activism and alternative party politics. He has been a social science high school teacher for the past 28 years. In 2006 (as a registered Green) Gary got elected as a trustee to the Center Joint Unified School District school board. He ran unsuccessfully in 2012 and 2016 for the Sacramento County Board of Supervisors. His current campaign for California Secretary of State focuses on electoral reform and corporate accountability. He wants the office to be a voice for a fairer, more transparent, and inclusive elections process in California.

Laura Wells is a political activist in California and in solidarity with Latin America. She lives in Oakland. She has been an organizer and a candidate for the Green Party and is running again for state Controller in 2022. She also ran for Congress in 2018, and for Governor after the global financial meltdown in 2010. A former financial systems analyst, Laura focuses her platform on taxing the rich, public banking, reforming Proposition 13, and saving money and lives with an improved Medicare for All healthcare system.

Mohammad Arif is running for Lieutenant Governor and he is the Kern County Chair of the Peace and Freedom Party. He and his wife, both immigrants from Punjab, have four children born in California. He earned a bachelor's degree from Hailey College and a masters in economics from Punjab University, and after coming to California in 1991 he attended Abraham Lincoln Law College in Los Angeles. He has worked as a legal administrator for law firms to handle the legal needs of immigrants for many years. He speaks English, Punjabi, Urdu, and Hindi, with some Arabic. Mohammad Arif ran for State Senate in a 2013 special election.

Green Sundays are a series of free public programs & discussions on topics "du jour" sponsored by the Green Party of Alameda County and held on the 2nd Sunday of each month. The monthly business meeting of the County Council follows at 7 pm, after a 30-minute break. Council meetings are open to anyone who is interested.
#LeftUnitySlate #June7Election

There are ONLY 33 days left until the June 7 Primary Election!

Our candidates need YOU. Please advocate, share and donate to our candidates at the Dedicated Green Party Statewide Candidate Fund!

Ballots will start arriving by the end of NEXT WEEK.

Meet up with Luis Rodriguez, Candidate for CA Governor