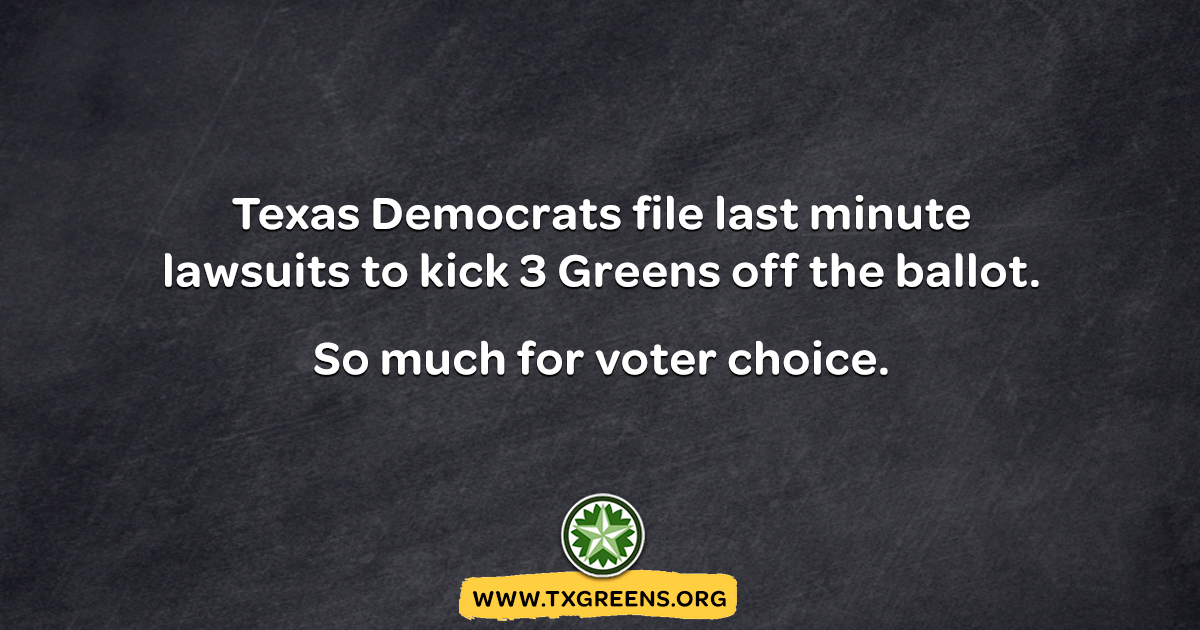 HOUSTON – On Monday August 17 around 10pm, the Green Party of Texas (GPTX) was named in two legal actions challenging the eligibility of three of our candidates nominated for the General Election. At 5:00 p.m. today, August 19, the 3rd Court of Appeals issued an opinion directing GPTX to declare Tom Wakely, katija gruene, and David Collins ineligible to appear as Green Party nominees on the General Election ballot.

The Democratic Party’s numerous attorneys demanded that we declare these three candidates ineligible because they did not pay the primary filing fee. This fee is a newly required obstacle created by the 2019 Texas Legislature under HB2504. Based on the unclear wording of this statute, lack of direction from the Secretary of State on who was eligible to sign a convention party candidate’s petition in lieu of filing fee, the petition form itself being incorrect, as well as pending Federal and State litigation, the GPTX had looked to the Texas Secretary of State’s office to make final determination.

This situation also applies to Libertarian candidates, who are not being challenged, or removed, for not paying the same filing fees. Instead our candidates are being targeted by Democrats threatened by progressive competition, especially Tom Wakely in CD 21, who is named in both of the legal actions.

These legal filings came five hours after the deadline for individuals to file as write-in candidates, which was Monday, August 17, 2020 at 5:00 p.m., and 4 days prior to the last day to correct the General Election Ballot. The timing of these actions is an obvious attempt to remove voter choices from the ballot and lessen the work Democrats have to do to earn votes. It is disappointing to have the legal system weaponized to suppress voters in this way.

The good news is that GPTX will still have our President/VP ticket, Howie Hawkins & Angela Walker, on the ballot. In addition, GPTX candidates Brody-Andrew Mulligan for TX HD 92 and Hal Ridley Jr. for US Rep 36, will certainly remain on the ballot. GPTX also retains ballot access through 2026, so we live to fight another day for the life & death issues we cannot abandon.