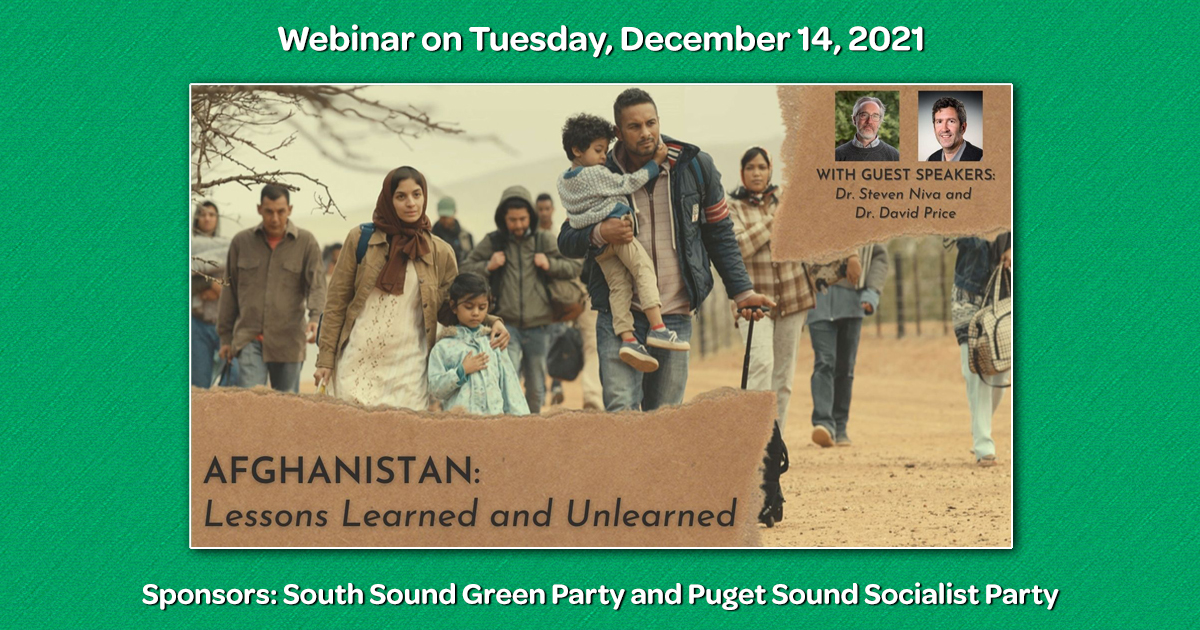 This event will explain how and why the US finally ended its twenty-year war in Afghanistan and what this means for US global power and future military interventions. The Afghanistan war cost the US over $3 trillion, with much of that money either stolen or handed out to the largest defense contractors. Over two decades, leaders in both major parties continually lied to the public that success was always around the corner, but it never was. Finally, this event will caution that the end of yet another failed war does not signal the end of US military interventionism and massive military spending, as the US war machine and the military industrial complex search constantly for their next enemy.

Be sure to share this event with your friends on Facebook and come prepared with your questions!

I was born in Seattle in 1966 and then lived in Europe, the Middle East and other parts of the United States before returning to Everett, WA where I graduated from Everett High School in 1984.  I obtained a B.A. in Political Science and Middle East Studies at The University of Virginia in Charlottesville, VA in 1988.  I lived in Washington DC for two years, working for Middle Eastern political magazines, before attending graduate school at Columbia University where I obtained a Ph.D. in Political Science and International Politics with a specialization in the Middle East.  I taught international politics at American University and Georgetown University in Washington DC, as well as a one-year position at Clark University in Worcester, MA in 1998.  I began teaching at The Evergreen State College in 1999.

A native of the Pacific Northwest, Price studied anthropology and intellectual history as an undergraduate at the Evergreen State College. He received his AM from the University of Chicago, and Ph.D. in anthropology from the University of Florida, studying under anthropologist Marvin Harris and conducting field research on the ancient and contemporary irrigation systems of the Egyptian Fayoum. He has conducted cultural anthropological and archaeological fieldwork and research in the United States and Palestine, Egypt and Yemen.