Join us TONIGHT for Lisa's biggest debate yet! 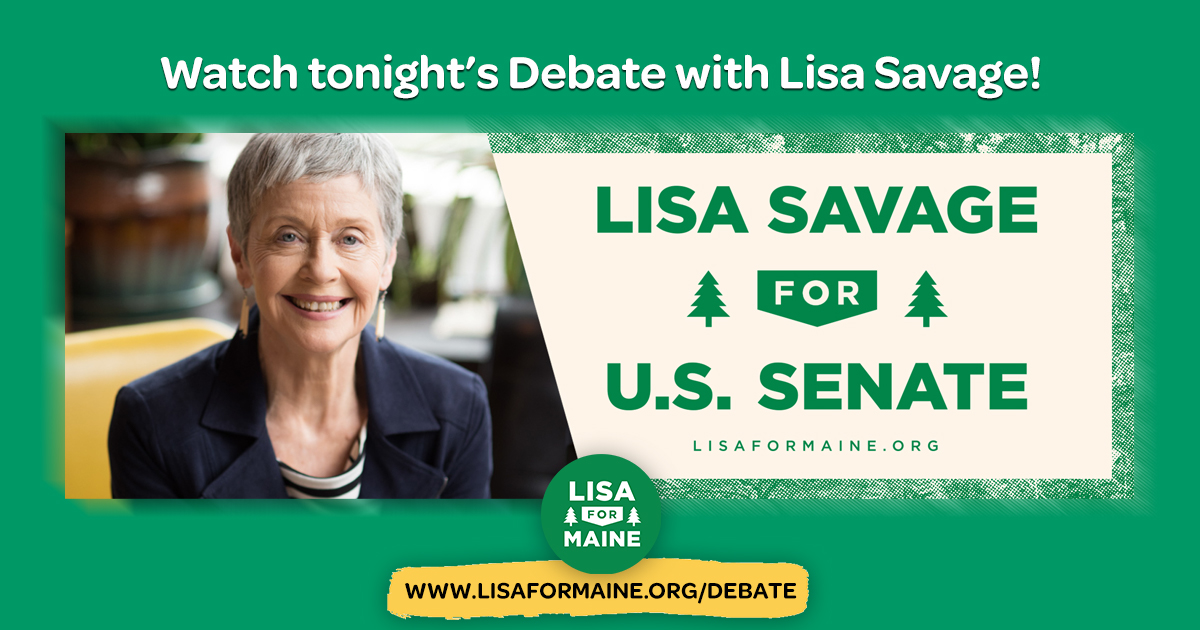 With Election Day getting close, tonight all eyes will be on the third debate in Maine’s closely-watched Senate race.

Lisa Savage has earned fans across the state with her strong, boldly progressive performances in the first two debates.

Now, with thousands of voters ready to cast early votes in this historic ranked-choice voting race, tonight's debate will be the most critical yet for Lisa’s campaign.

Please join fellow Lisa Savage supporters tonight at 8pm Eastern time to watch the debate and cheer on our favorite champion for people, planet, and peace!

Find out how to watch the debate and RSVP to watch with us on Facebook and/or LisaForMaine.org.

We need your help to get Lisa's message out to as many voters as we can. As one way to do that, we’ll be holding a Twitter storm on the night of the debate, sharing reasons why we support Lisa with the hashtag #LisaForME starting today at 7pm ET.

Before we start the Twitter storm, we’ll be holding a Social Media Action Training starting at 6pm ET to give you the tools you need to help get out the vote for Lisa on social media.

Why are we focusing on social media? Because of the pandemic, this year it’s more difficult to reach voters face-to-face, and a record number of people are voting early. Our field team has found that the people least likely to have already voted are young people - who are also the most likely to be active on social media.

That’s why we need your help now on social media to get out the message to rank Lisa first!

Please join us tonight for our most important debate watch event and social media mobilization yet:

If you can't join us for the entire time, no problem - please RSVP anyway and join for whatever time you’re able.

With just 19 days left in this historic election, we need all hands on deck to finish strong and reach every possible voter with Lisa’s positive message of real change.

Thank you for everything you do to build this inspiring movement for the greater good!

In gratitude,
The Lisa for Maine Team