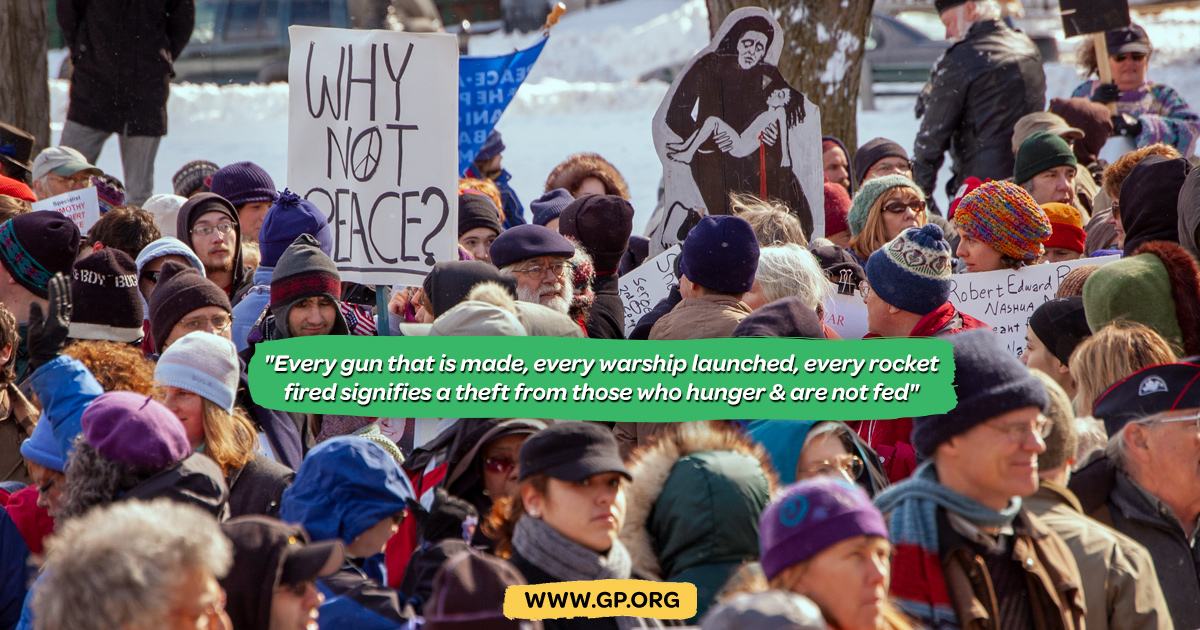 LANSING, Mi. – This fall a coalition of organizations from around the state hosted an all-day conference here in East Lansing on "Building a Peace Economy" where instead of spending $100 million dollars for a single jet fighter we invest it in schools, medical care for all, or renewable energy.

More than 100 gave up their Saturday to learn from several nationally recognized speakers as well as state and local activists, why and how the money pit that has grown for military spending might be redirected towards true community well-being and security. More than 300 others watched online and hundreds more have viewed it since.

A year was spent moving the idea of such an event to reality, reaching out to many players along the way and with hopes of drawing participation from our elected representatives in DC, who would be home in Michigan on break. We wanted to hear what they thought of the ideas: What hurdles must be overcome? How can concerned citizens better effect change in policy?

We hoped for coverage in the news media, either before or after the event, to give the topic some visibility. All of this was for naught. Not one of our elected members of Congress nor any of their staff joined us. Not one media outlet we contacted well in advance and with follow-ups near the event contacted us or showed up to cover the event.

It would seem from these reactions that our elected officials are not comfortable discussing the blatant slush funds that revolve around military spending, even those who sit on committees that oversee that funding. The media in many cases has a shrinking news hole and concomitant shrinking staff, and national affairs like military spending are beyond their attention span. Yet, we continue to pour increasing cascades of tax dollars into this slush fund, much of which is unaccounted for. (See, for example, the work of MSU Economics Professor Mark Skidmore, or the recent report on the increase in secret spending of the Pentagon to $76 billion last year).

If our elected officials and the news media continue to ignore the allocation of our treasury to increase militarism, how will we ever begin to discuss building an economy that preserves the biosphere we depend on, while affording an equality of opportunity and economic security for all of the children, leaving no one behind? In 2017 all 193 member states of the United Nations agreed on a set of 17 Sustainable Development Goals to collectively work towards by 2030. There is no doubt that the increasing expenditure of weaponry and militarism is antithetical to those globally agreed upon goals.

As President and General Dwight Eisenhower so prophetically noted,

"Every gun that is made, every warship launched, every rocket fired signifies, in the final sense, a theft from those who hunger and are not fed, those who are cold and are not clothed.

"This world in arms is not spending money alone. It is spending the sweat of its laborers, the genius of its scientists, the hopes of its children. The cost of one modern heavy bomber is this: a modern brick school in more than 30 cities. It is two electric power plants, each serving a town of 60,000 population. It is two fine, fully equipped hospitals. It is some fifty miles of concrete pavement. We pay for a single fighter with a half-million bushels of wheat. We pay for a single destroyer with new homes that could have housed more than 8,000 people. … This is not a way of life at all, in any true sense. Under the cloud of threatening war, it is humanity hanging from a cross of iron."

How do we get news media to look at this issue, or elect officials brave enough to publicly address it? Self-immolation by Buddhist monks helped direct world attention to the catastrophe of the Vietnam War, but we're not ready for that level of sacrifice yet. Tell us, please: When will this travesty become news?

Terry Link is a member of the Michigan Green Party and founding director of the Office of Sustainability at Michigan State University.