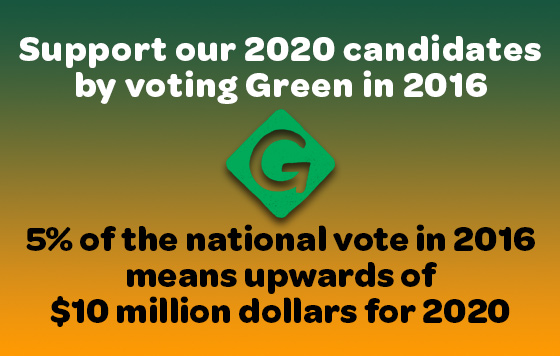 Maine Green Independent Party (MGIP) leaders are urging their fellow citizens to realize that a vote for presidential Green Party candidate Jill Stein in November has powerful implications for the 2020 election.

Stein's poll numbers are rising, and if she wins at least 5% of the popular vote, the Federal Election Commission must classify the Green Party as an official "minor party." This designation will result in approximately $10 million in federal funding for the Green Party's presidential candidate in 2020.

"That level of funding," said MGIP Co-Chair Gil Harris, "is a godsend to a party that has been running candidates on a shoestring for decades—doing so partly because our party from top to bottom does not accept corporate money."

"In the wake of this phenomenal election year," Harris continued," progressives are galvanizing across Maine and the country, eager to build a lasting counterweight to the two corporate parties. The timing could not be more urgent," he said, "not just for this election, but for building into the future. The 5% threshold is an attainable goal and, though the funding pales by comparison to the hundreds of millions spent by the two major parties, it gives a huge boost that can lead to a much healthier and fair electoral system of four parties—assuming the likelihood that the Libertarian Party will also qualify for the 5%."

Nancy Allen, a veteran press liaison and long time organizer for the Green Party, notes that "The Green Party has worked since 1984, in this state and nationally, to build a strong presence across the political landscape. It has become the leading voice, perhaps the only voice, in the political landscape for timely ecological action, grass roots democracy, social justice, and non-violence. The U.S. election process," she said, "has become absurdly and dangerously restrictive and undemocratic. "

"We have no illusions," said MGIP's companion Co-Chair Jon Olsen. "Building a real political alternative is harder and takes longer than you think. But our steady building is starting to show solid political results."