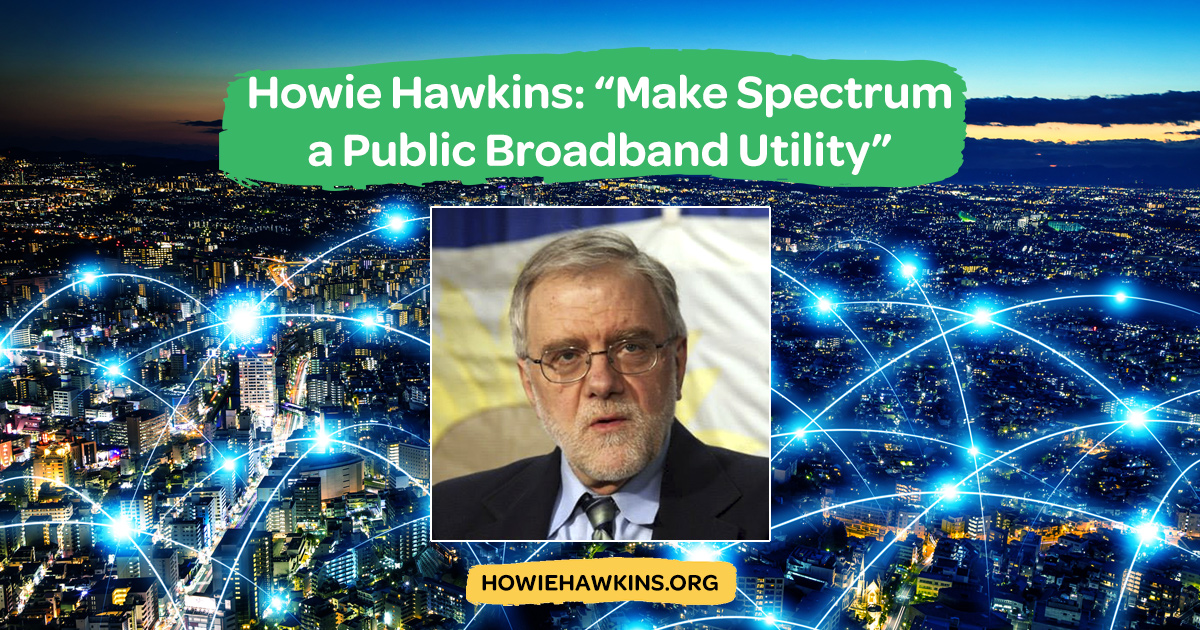 Syracuse, NY – With state regulators demanding that Charter sell Spectrum, Howie Hawkins, the Green Party of New York candidate for governor, said today that New York State itself should take over Spectrum for its own public broadband utility.

New York State regulators want Charter to sell Spectrum because it failed to build out high-speed access to underserved communities and increase broadband speed, which were the regulators’ conditions for approving Charter’s merger with Time Warner Cable in 2016. Charter was expected to expand service to 145,000 homes in underserved rural or inner city communities within a four-year period as well as make its broadband services faster statewide by the end of 2018. The NYS Public Service Commission said last week that Charter had failed on both accounts and ordered Charter to sell Spectrum.

Standing outside Spectrum’s news and customer service offices in the converted New York Central Station building on East Erie Boulevard, Hawkins said, “New York State should take over Spectrum to jump start a public broadband system that provides high-quality service to all New Yorkers. Customers are unhappy with escalating costs and deteriorating customer service. A democratically-structured public broadband system would operate at cost for public benefit, not for the profit of distant shareholders. It would provide better service at lower cost and rapidly expand service the underserved rural and inner city communities.”

Hawkins said a public broadband system should be decentralized, with local governments operating local franchises. The statewide system would be a federation of the local franchises to coordinate statewide infrastructure, planning, and negotiating with vendors, including TV networks.

Hawkins said that community broadband would address the problems Syracuse has had with Spectrum and Verizon. “In Syracuse, Spectrum is operating under a grandfathered franchise agreement that expired 11 years ago in 2007. Time Warner has not negotiated in good faith with the city because the state Public Service Commission routinely renews the old agreement every three months. Time Warner and now Spectrum failed to live up to franchise obligations to provide Public, Education, and Government channels and community media production facilities. Costs are up and service is down. We can fix those problems with community broadband system owned by and accountable to its customers,” Hawkins said.

Hawkins said that now that the Public Service Commission is no longer kowtowing to Spectrum, Syracuse and other municipalities city have a good case for just cause to deny the routine franchise renewals by the PSC and take over the franchise without waiting for the state to takeover Spectrum statewide.

Hawkins added that Verizon has not been good to Syracuse either. Verizon was given permission in 2005 to build FIOS lines throughout the city without securing a franchise agreement. In 2010, after extending the FIOS triple play – phone, internet, TV – to the more affluent east side neighborhoods, Verizon stopped, leaving the poorer neighborhoods without Verizon FIOS service.