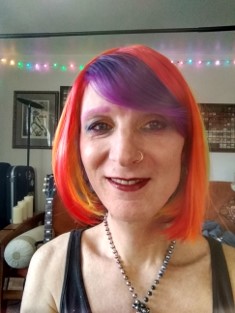 My name is Margaret Elisabeth and I’m currently the Co-Chair of the National Lavender Green Caucus as well as an Alternate Delegate for the Caucus and Media Spokesperson. I’m sure many of you have seen my posts on the National Committee email lists and you may have seen some in the Green Party official Facebook group however those have tended to be focused on my Caucus and activism within, so I’d like to take some time tonight to introduce myself and explain my vision for how I see the Green Party growing and a few of the concrete steps we can take to get there.

I was born in Knoxville, TN and was put up for adoption when I was 2. I was adopted by a couple who worked for Esso (Exxon) and we moved to Libya when I was 6. I was raised there until I moved back to the United States during the summer I turned 16. I am grateful for that experience in more ways than I can possibly count yet it was trying and very difficult as well. I grew up without access to television, print media or radio with only the school library available as any form of diversion and, as boredom will do, I ended up reading every book in the library including the dictionary, twice. Some topics of education were not permissible such as astronomy and human biology. It was against the law to have a telescope so I read a book, took apart a microscope and built my own so I could study the moon for myself. Because of that experience growing up, as an adult I highly value science and the scientific method for acquiring useful knowledge about our world and the universe we find ourselves drifting through.

I’ve been involved in Green activism for the last 25 years with specific focus upon Leave-No-Trace camping/festivals and non-monetary barter based economies with community policing. My friends and I created an event called Playa del Fuego (Beach of Fire) based off the Burning Man ethos in 1998 and it’s been going ever since. I’ve voted Green ever since Nadar ran and I formally joined the National Party in 2016 to help run the ‘Washington State for Jill Stein’ and ‘Jill Stein Dank Meme Stash’ pages on Facebook. I’ve been honored and grateful to receive the support and trust of my peers in the Lavender Caucus, initially representing the Caucus as a National Delegate and, currently, as a Co-Chair and Media Spokesperson. I believe that the Green Party is the best chance we have of making real, substantial change in the United States and I’m proud to be a part of it.

I believe that it’s important for the Green Party to be scientifically literate as we advocate for the rest of our country and humanity to become engaged in the fight against climate change and, colleagues, our time is running out on that fight. We must act and we must act quickly. That requires the Green Party to be a strong, ethical leader in the fight against climate change so that we can empower and inspire those around us to make the changes that will save our planet. One of the ways that we can help inspire effective activism in our battle against climate change is through the creation of a training section on our website with a listing of historic trainings which we’ve done and as a repository for any trainings which we will produce in the future.

I believe that we have to build the changes we want to see in the world and one of the ways in which we can build and empower others to help us build this change is through effective outreach. Effective outreach has many different facets and I think a critical yet overlooked aspect of outreach is effective and efficient use of our database of registered Greens. The Party needs to prioritize cleaning up our data which will allow effective outreach through platforms such as DoGooder which could be leveraged on a weekly or bi-weekly basis to ask Greens to sign on to various petitions which intersect with our political goals.

I believe that, regardless of who the Presidential Nominee is, the Steering Committee needs to work as closely as possible with the campaign to ensure that volunteers are coming into the Party. We need to help Greens find effective volunteer positions when they join the Party and help the States and Locals with coordinated outreach to increase engagement. We can do this through more consistent and efficient use of our online petitions to help States and locals empower local Greens in their area like we did with the Covid19 ballot. We are having a large increase in people joining the Party and it’s imperative that we use this information as efficiently as possible.

I believe that the Party needs to get it’s core operations functioning properly and create rules and policies to help alleviate internal discord. Functioning systems don’t eliminate disagreements but they make the landscape better for principled disagreement and helps to establish that we still have specified and accountable roles to play to keep the systems going even while disagreeing with each other. We can do this through the establishment of an Ethics Committee which will establish intra-party working groups to create a system of accountability for National

I believe that the unique conditions of Covid19 have created the need for the Party to have a robust technological infrastructure to facilitate the move to nearly 100% online engagement and involvement in our Party, up to and including our Presidential Nominating Convention. Our Party primarily uses a mix of technology, platforms and communication methods to speak with its members. It’s important for us to have a consistent approach in our communications and the implementation of best practices for our technology. I think we can do this through the creation of a Technology Committee which would be responsible for investigating and recommending the best technology to help the Party achieve its goals of outreach and growth.

My name is Margaret Elisabeth and I’m asking for you to rank me #1 on your ballot for Green Party Steering Committee.