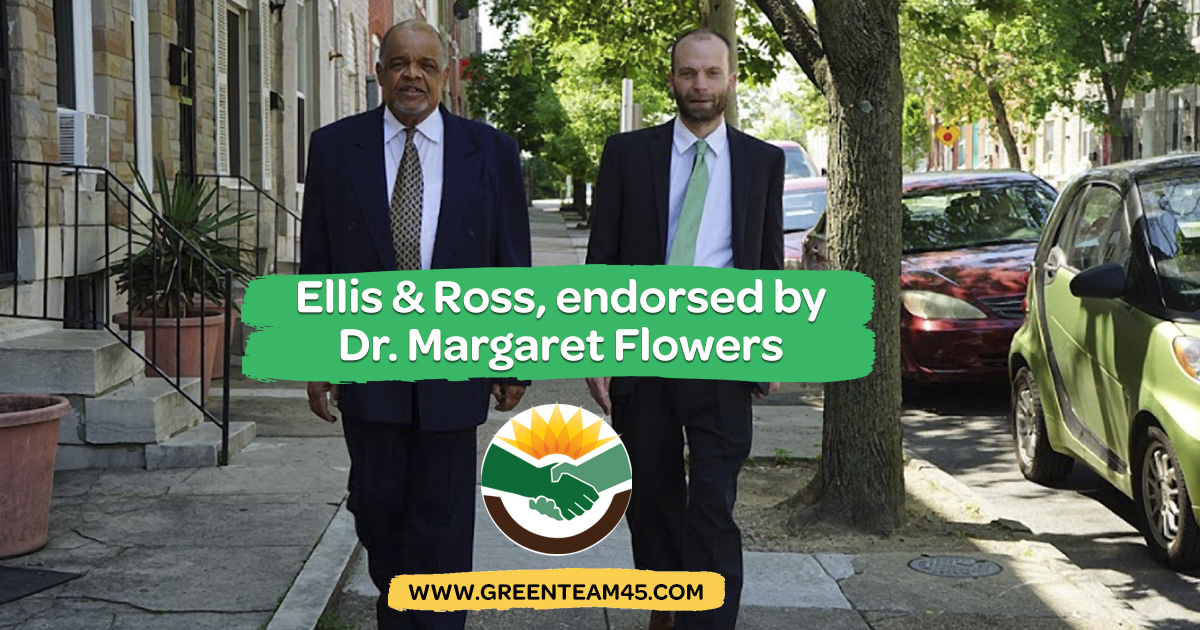 We currently have an opportunity for the Green Party to make a leap of progress by showing it is a viable party that can win elections and defeat the leadership of the Democratic Party in Maryland.

Andy Ellis and Glenn Ross are taking on one of the most entrenched delegations in the state, including the Corrupt Democratic Whip and a Democratic Machine Boss who are angling to become the leaders of the Democrats in Annapolis in a race that will have three winners.

Let me tell you about them.

Glenn Ross has served his community for nearly 40 years as a community leader, serving seven terms as president of his community association. He was voted the “Best Community Activist” by the Baltimore City Paper, and he developed the “Urban Environmental Toxic Tour,” which shows environmental health hazards and environmental racism in East Baltimore.

When Glenn gets to Annapolis, he plans to build a coalition that can secure state and federal funds to remediate and repair the environmental destruction and degradation poisoning residents of Baltimore City. Glenn will work to make sure this revitalization effort is in the control of the communities who are most affected, not the developers with the most profit motive.

Andy Ellis has been a leader of the Baltimore City Green Party, building a racially diverse party that has become the second party in Baltimore and is poised to win local elections. He created successful programs to train empowered community advocates and mentor powerful youth activists. He worked as an adult leader of Youth Organizing Urban Revitalization Systems (YOURS), teaching young people how to start their own socially responsible businesses by connecting them to the community and capital.

When Andy gets to Annapolis, he will work to implement a broad-sweeping progressive agenda for Racial, Economic and Environmental Justice. He will work to form a new electoral coalition that brings together activist organizations and elected officials to take on the party bosses and their deep-pocketed donors.

Each of them is a strong candidate that I am excited to support, but together, as a team, Glenn and Andy offer a real opportunity to strike a blow against a fragile Democratic Party machine that is falling apart.

They are challenging two Democratic Party dinosaurs. If Glenn and Andy defeat one or both of them in a race where there will be three winning candidates, it will send a loud message that the Green Party can take on the Democratic machine not just to Baltimore City, but also through the entire state of Maryland. Indeed, this will be a victory heard throughout the nation that will show Greens they can defeat entrenched politicians, and a message to the two-thirds of voters who want to see an alternative to the duopoly, that a progressive alternative has come of age.

I already donated to their campaign. I am asking you to do the same. You can donate online or you can mail a check made out to “Green Team 45 Slate” to Glenn and Andy’s Campaign office at 509 N. Milton Ave. Baltimore MD 21205 .

They have just about 60 days to go before the election and need to print materials, send postcards, and keep paying their staff of young greens. They also need to boost their social media advertising to counter their exclusion from the traditional media.

Glenn and Andy have a solid game-plan to reach voters and to cover the polls on election day. With your support, they have a real chance to win two seats in this race, and send a signal that when Greens work together, we can win.

Thanks for your support.
Margaret Flowers
Co-Chair, Green Party of the United States
Member of the Maryland Green Party Coordinating Committee