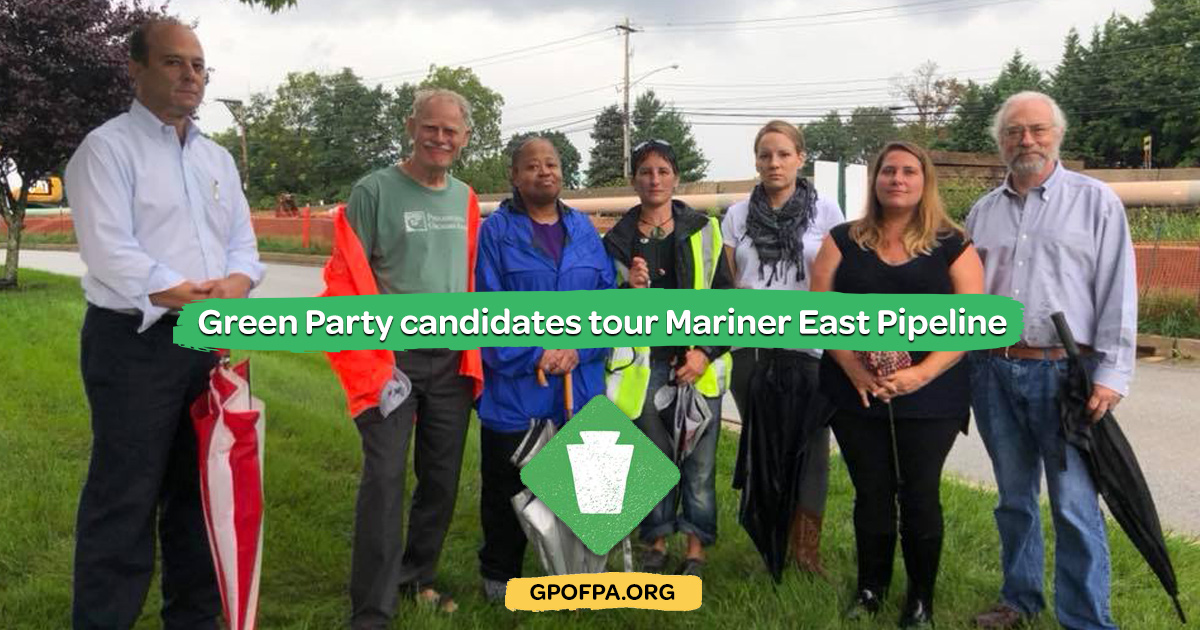 "Uwchlan Safety Coalition has been diligent about reaching out to campaigns for state office to visit the Mariner East Pipeline running through our community," said Rebecca Britton, a spokes-person for the nonpartisan, grassroots organization. "We are pleased to say the Green Party candidates were the first, and so far only, group willing to come and rebuke the powerful Marcellus Shale Coalition lobby." Residents spoke candidly to candidates about concerns ranging from well contamination and the prospect of long-term, drilling vibration damage to their homes to the misuse of eminent domain along the route of the proposed four-pipeline system, which when complete will narrowly skirt by 40 public schools.

Uwchlan Safety Coalition representatives caution that owner Energy Transfer Partners (which also operates the controversial Dakota Access Pipeline) has the worst safety record in the industry, averaging one leak every 11 days for the past 15 years. A Mariner East feeder line in Beaver County, PA, recently failed during its first week of operation, destroying a nearby home in a fiery explosion that attracted national attention.

"It is encouraging to have the statewide candidates come visit our community, speak to affected residents, and see for themselves the damage that Mariner East has [already] inflicted on our neighborhood." said Laura Obienski, mother of 2 children who will attend K-12 schools in the probable impact radius of these lines. "Public officials take an oath of office to represent communities and the peoples' health, safety, and welfare … not corporations and lobbyists. It is time for more candidates to get out of their offices and look, feel, and understand the burden that affected communities are being forced to bear, all for plastic production in Europe."

The GPPA has called for a ban on fracking since 2008 and an end to all natural gas extraction involving the use of water resources, saying "the short-term economic benefits will be dwarfed by the long-term economic and environmental consequences." In 2018, all Green Party candidates will campaign for building a "green economy" based on sustainable renewable energy.

The Green Party platform struck a chord with a local pipeline activist known online as P.K. Ditty, whose live Facebook coverage of Tuesday's tour has received over a thousand views. Ditty wrote, "I am pleased to know that the Green Party does not accept corporate campaign contributions and rejects the notion that banning fracking would injure our economy. There is no viable economy without a sustainable economic plan for our future."