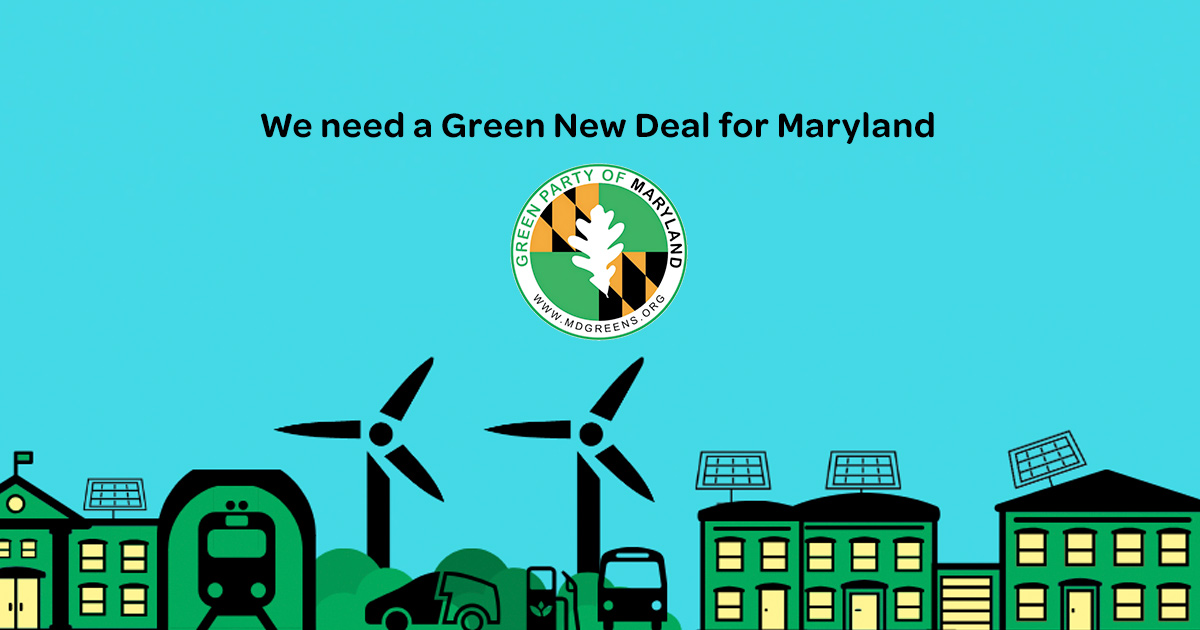 Over the last decade, Maryland's political establishment repeatedly expanded corporate gambling in our state, promising the tax proceeds would swell funding for public education. In fact, the reverse happened, and the new tax revenue was used to offset steep cuts to K-12 education from the general fund budget.

A similar proposal was floated recently regarding taxing the fossil fuel industry, which could create a perverse incentive to maintain or even expand an industry wreaking havoc on our climate at a time when we must place a definitive sunset date on using dangerous energy sources altogether. While market-based proposals like a carbon tax or cap-and-trade might be an intermediate step in Maryland's green transition, these policies have been shown to be insufficient to the scale of the crisis we face; now is not a time for professional environmental incrementalism.

Instead of an isolated policy taxing major carbon emitters like the fossil fuel industry, which threaten the very livability of our communities, we must implement a Maryland Green New Deal (MDGND) based on four guiding values: 100% renewable energy by 2032, an end to corporate influence over our environmental policies, a curtailment of the U.S. military's enormous carbon footprint in our state, and a just transition for working class folks, people of color, and other marginalized communities.

Instead of merely repackaging the status quo, the MDGND will begin to take us off a collision course with climate disaster and put us on track to leave Maryland to future generations in better shape than we inherited it.

The first essential principle of the Maryland Green New Deal is a commitment to 100% renewable energy by 2032. The science is clear that kicking the can down the road is a collective death sentence, so we cannot afford to wait on the implementation of half solutions to play out. This commitment to clean energy must be accompanied by reparations to those most negatively affected by climate change caused by environmental racism and oppression, communities like Baltimore, Brandywine, and Cove Point.

To ensure the success of this transition, and to fund it, Maryland must make it clear to fossil fuel polluters that it will use eminent domain to protect the public interest to acquire and sell off all non-carbon intensive industry assets that have not been converted to clean energy by 2032. We owe nothing less to our children and grandchildren's generations.

The second principle of the MDGND, without which all other components face longer odds, is to remove the undue influence of corporate climate deniers and destroyers on Maryland's democracy.

During the 2018 elections, the fossil fuel and other major carbon emitting industries poured big money into the campaigns of Republicans and Democrats alike. While the Citizens United Supreme Court ruling may prohibit an outright ban on these contributions on the state level, Maryland can enact a warning on all campaign literature funded in part by the fossil fuel industry, similar to those found on cigarettes. We must also create more robust public financing programs for all elections, ban former elected officials from professional lobbying, and end the structure of pay to play that made "Healthy Holly" possible in order to awaken our democracy.

The third principle of the MDGND would convert our state's sprawling weapons industry into green spaces and green jobs. Doing so will protect public health in two areas: reducing Per and Poly Fluoroalkyl Substances (PFAS) contamination of our precious water resources and reducing dangerous contamination associated with firing ranges and weapons testing sites.

Recognizing the vacuum at the federal level, Maryland must establish maximum contaminant levels for PFAS in drinking water, groundwater, surface water, and sewer sludge. These levels must follow the lead of legislatures in California, New Jersey and Vermont with stringent guidelines. Ending tax breaks for corporate weapons dealers will provide another funding stream for the MDGND.

Finally, the MDGND will ensure a just transition to a green future by restoring communities harmed by the state and fossil fuel industries. It will do so both by additional direct investment in targeted communities as well as by employing workers to build the clean energy future as staff of a newly formed Maryland Environmental Neighborhood Defense (MEND) Corps.

Reparations mean repaying communities for harm caused by the state and providing the autonomy for these communities to build the just, green future they choose. Specifically, the MEND Corps would remediate all lead paint in homes in Baltimore's Black Butterfly neighborhoods and beyond, as well as remediating brownfield sites across the state while incubating democratically-owned green businesses.

The MDGND would implement 100% renewable energy by 2032, awaken our democracy by reducing the influence of climate deniers and destroyers, move Maryland's war economy toward a green economy, and ensure a just transition to a green future for people of color, working class people, and other marginalized communities. We need to fund equity in Maryland— including in public education pre-K through graduate school — by holding climate deniers and destroyers accountable for the damage they have done, not simply by taxing their unabated growth.

In short, we need a Maryland Green New Deal, not another casino bait and switch. We invite Marylanders across the state to the table to plan our green future together, guided by the four principles outlined above, and in ways that best meet the needs of your local communities.

Owen Silverman Andrews
The writer is co-chair of the Baltimore City Green Party.