Where the Green-Rainbow Party stands on Ballot Questions 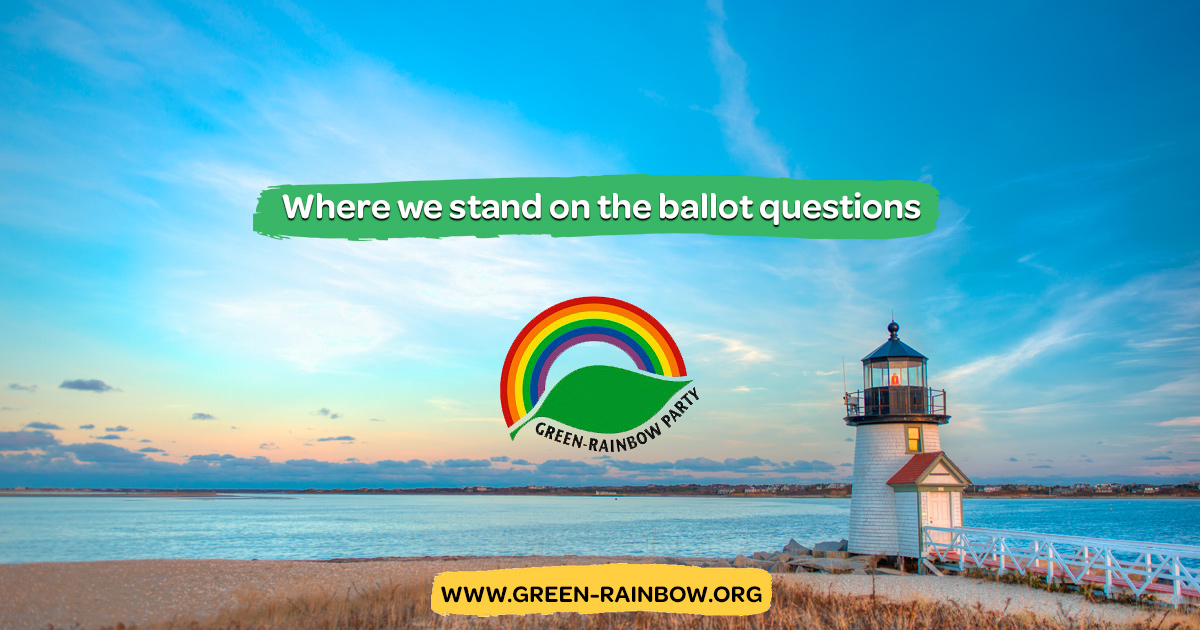 If Question 1 passes and Massachusetts enacts the Patient Safety Act, we believe it will enhance nurses’ rights and improve health care for patients in our state. We stand with the broad coalition of nurses, patients, and family members, health and safety organizations, community groups, and unions that support a YES on Question 1 – many of whom see the issue addressed in this ballot question as part of a larger grassroots movement regarding health care rights.

Get all the details here.

As a reminder, we need you to come out and support all the GRP candidates in the 2018 election. The state candidates need to get 3% of the total vote to help the GRP get the recognition it deserves. Be sure to pass that message unto all the like-minded people in your life!

Question 2 – It's your call

The GRP takes no official position on the proposed law due to key concerns. If passed, it calls for a committee of citizens that would suggest how to change the U.S. constitution. However, those committee members would be appointed by the Massachusetts Governor, Secretary of the Commonwealth, Attorney General, and leaders of the two houses of the Massachusetts State Legislature – the same people who already benefit from the Democratic-Republican duopoly and the corporations that fund that machine.

Of course, the Green-Rainbow Party is very much in favor of legally establishing that corporations are not people, that money is not speech, and that spending on electoral campaigns must be responsibly regulated.

We recommend that you carefully read the ballot language and our longer response before deciding.

The Green-Rainbow Party of Massachusetts supports a vote of YES on statewide ballot Question 3 to uphold the 2016 law forbidding discrimination based on gender identity in places of public accommodation.

The Green Party Platform Section II (A) (5) recognizes “the rights of persons who identify as gay, lesbian, bisexual, intersex, trans-sexual, queer, or transgender” to be free from discrimination in “all areas of life.”

Get all the details here.

Vote your values by supporting all the GRP candidates in the 2018 election. The state candidates need to get 3% of the total vote to ensure that the GRP maintains its official status as a recognized political party. Help us achieve our goal by telling all the like-minded people you know to vote Green-Rainbow in this election!

Know that all the 2018 Green-Rainbow Party candidates believe in campaign finance reform and keeping dark money out of the political process.

By supporting them on this Election Day, we can get one step closer to clean and fair elections in the future. Be sure to forward this message to everyone you know working towards this goal!