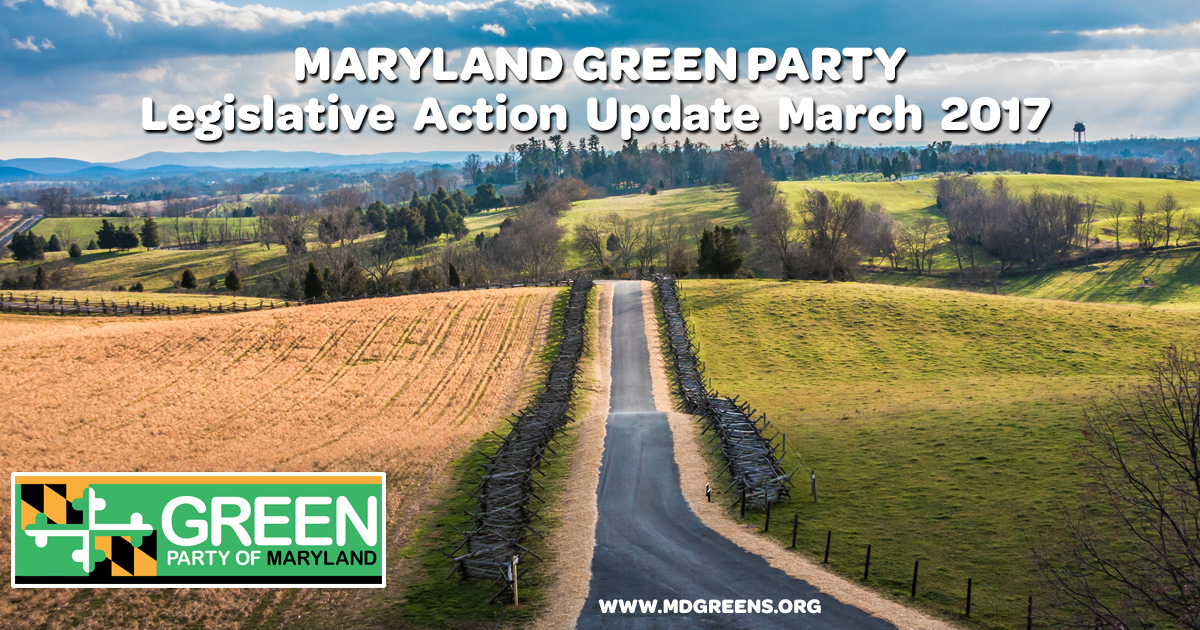 The Annapolis legislative session is about half over. There are a number of bills that we are supporting that will promote justice, democracy and the environment. Here is a summary of where they stand in the legislature. Please consider taking action to support these bills.

The cash bail system in Maryland is broken and unjust. It imposes jail time on those who have not yet been tried. Cash bail has a disproportionate impact on black communities and communities of people living in poverty. HB 1390 and SB 880 have the most potential to truly ameliorate the implications of Maryland’s unjust cash bail system, while creating community based alternatives and institutions which provide an alternative to incarceration.

Action: Contact Your Senators and Delegates and ask them to Support The maryland Pretrial Justice Reform Act of 2017

Action: Contact Members of Ways and Means Committee and ask them for a favorable recommendation on the bill, with no amendments. Find information for contact here

The Maryland Healthy Working Families Act allows for employees at businesses with more than 15 employees to earn paid "sick and safe leave" -- and unpaid leave for businesses with 14 or fewer workers -- when the employee or a family member is sick, with few exceptions.

Update: The Bill Passed the house this week with a veto proof majority, it passed out of the Senate Finance committee with some minor but diluting amendments. It will likely be going to a senate floor vote this week.

This bill would permanently ban fracking when the state moratorium expires in October.

Update: The House bill (HB 1325) passed out of committee on Friday afternoon with a vote of 18-4, including four Republican yea’s. It’s on the schedule for the full House this week and will likely be voted on before the end of the week.

Action: Please keep up the pressure and call Senator Miller

HB 1236 and SB 891 call for a constitutional amendment providing Marylanders over the age of 21 a right to use, possess, and cultivate Cannabis. If this bill passes both chambers of the General Assembly by a ⅗ majority, the question would go to voters during the 2018 general election. In the case that the constitutional amendment passes, residents of Maryland would be able to possess up to two ounces of marijuana and cultivate up to six plants. The purchase and sale would be regulated by the state of Maryland.

Maryland systematically underfunded Historically Black Colleges and Universities, essentially starving them and making it impossible for HBCUs to compete with the predominantly white colleges. SB 712 will begin to correct the long-term racially unfair actions of Maryland by providing supplemental financial assistance to HBCUs to ensure they are comparable and competitive with the majority white four-year public institutions in Maryland. The state needs to give HBCUs the resources they require to succeed because doing so is in the best interests of all students in Maryland.

Update: Senate Hearing is 3/7 at 1:00 PM before Budget and Taxation Committee. HBCU night in Annapolis is 3/21

We oppose this bill that would prevent counties and municipalities from raising the minimum wage independently from the state.

Update: This bill has not moved out of committee

Action: No action at this time

Thank you for your support!