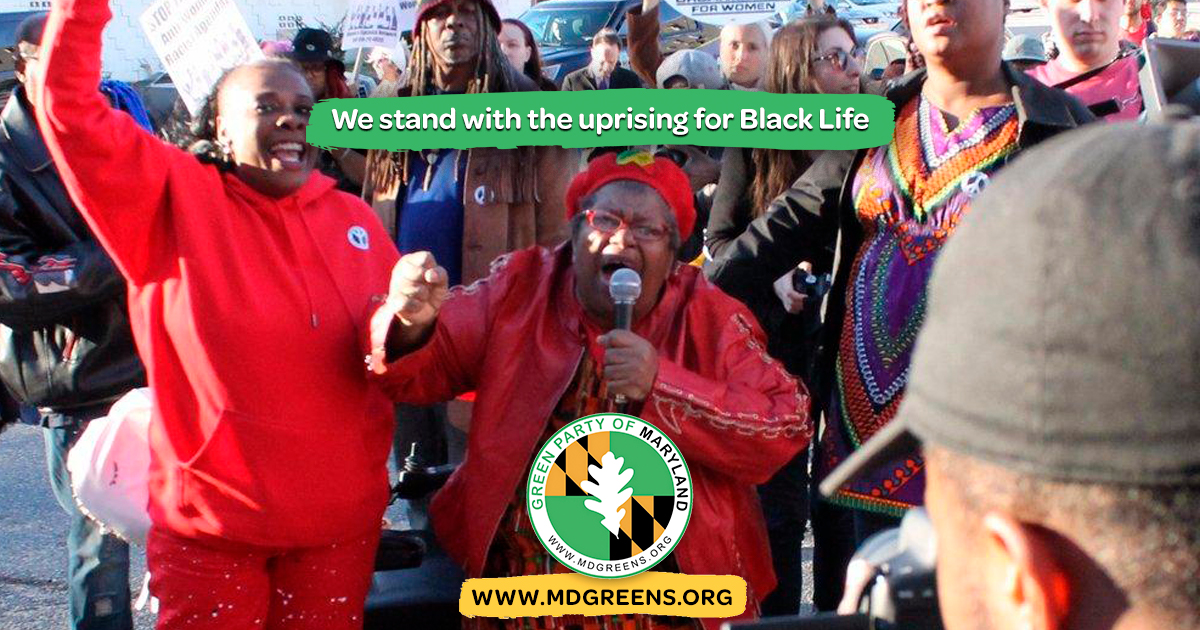 BCJC is a social-political coalition that is committed to ensuring accountability and transparency among the Baltimore County Police Department.   BCJC will be hosting a forum on defunding the police the week of July 5th.  To receive event information, follow BCJC’s facebook page: https://www.facebook.com/BaltimoreCountyJusticeCoalition/

If you would like to connect further, BCJC can be reached by email at [email protected]

Police violence and racism have always been tools of capitalism

Read Baltimore City Greens Kevin Zeese and Margaret Flowers’ article that explains how police have been designed to uphold the status quo including racial injustice and class inequality, and how instead of bloated budgets for police forces, there is a need for “democratic community control of the police as a starting point in addition to defunding the police and funding alternatives such as programs that provide mental health, public health, social work and conflict resolution services, and other nonviolent interventions. Funding is needed for the basic human needs of housing, education, employment, healthcare, and food especially in communities that have been neglected for years and whose low-wage labor has enriched the wealthy in this unequal society.” Read their article here.

Following a successful settlement of  legal action taken to reduce the number of signatures, The Maryland Green Party is in the home stretch of our 2 year long ballot access effort. We have more than 5000 signatures, the amount the state agreed to in the legal settlement, but now we are building our cushion to account for the signatures they will discard. We have until August 3rd to submit petitions and we want to work to get  7000.

After winning 68% of the vote in the Maryland primary, Howie Hawkins went on to clinch the first-ballot nomination from the Green Party when he won the primaries in Michigan and with the Lavender Caucus. Hawkins selected Angela Walker to be his running mate. Angela has been a longtime activist who led the Amalgamated Transit Union into the Wisconsin Uprising against Scott Walker and into the Occupy Movement. She ran for sheriff against David Clark in Milwaukee and won 20% of the vote and was the Socialist Party vice presidential candidate in 2016.

Hawkins/Walker have joined the protests against police violence and have called for radical changes in policing, with greater emphasis on mental health and social workers as well as conflict resolution experts to decrease reliance on police and investment in neglected communities. They have anchored their police position around democratic community control of the police. They have also pointed out of the failed bi-partisan state especially with Covid-19 and the economic collapse. Hawkins has been receiving increasing media coverage including in The Hill, Newsweek, Hill TV's Rising, Jacobin, and the Independent. Hawkins is working to achieve ballot access in all 50 states and contributed to the legal fees for Maryland and is helping the MGP be on the ballot in 2020. Hawkins/Walker is also working to achieve federal matching funds.

Green Party of the United States Co-Chair and 2016 U.S. Senate Candidate Margaret Flowers and former Maryland Green Party Co-Chair Andy Ellis will host a zoomcast on Thursday July 2nd at 7:00 PM. They will be making the case for why we need the Green Party in the 2020’s by comparing the Green Position to that of the Democrats and Republicans on issues including: Policing, health care, the climate crisis, and war and peace. You can tune in live on our Facebook page or directly via zoom at:
https://us02web.zoom.us/j/83708472346?pwd=NC9UUllBYXc1a2pHMXVpTGU1UHFJUT09

The following week Andy Ellis will feature Dayvon Love of Leaders of a Beautiful Struggle on the Zoomcast, July 9 at 7:00 p.m. They will talk about be discussing why community control is essential to the discussion about policing and abolition, the possibility of meaningful police accountability legislation reform in Annapolis in 2021, and why Dayvon thinks black voters in Maryland should not vote for Joe Biden the Democrats. Look for info on our Facebook page.