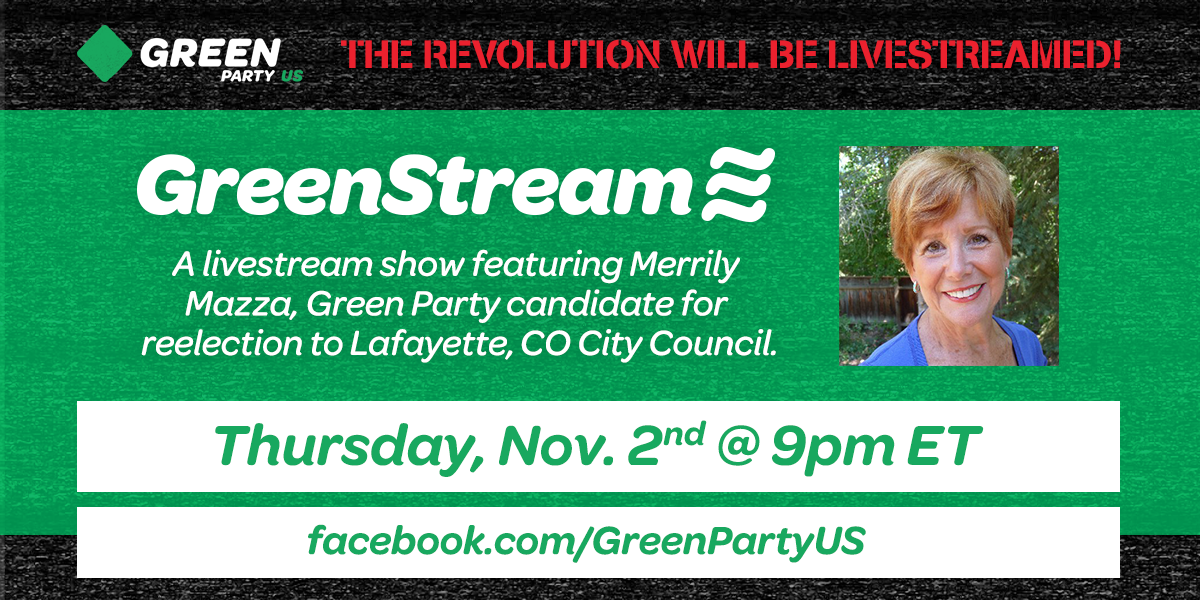 WASHINGTON, D.C. -- The next broadcast of GreenStream, the Green Party's livestream show, will present an interview with Merrily Mazza, Green incumbent candidate for City Council in Lafayette, Colorado.

Andrea Mérida Cuéllar, co-chair of the Green Party, will interview Ms. Mazza. Technical producer for the show will be Craig Seeman.

Merrily Mazza is completing a four-year term as city councilor in Lafayette, Colorado, and running for reelection. She is president of the Colorado Community Rights Network and a board member of East Boulder County United, a local chapter of Colorado’s statewide anti-fracking network.

Ms. Mazza is former Vice President of Publishing Operations for the McGraw-Hill Companies and has retired from a 32-year career in educational publishing. In 2013, Ms. Mazza worked with the Community Environmental Legal Defense Fund to craft a local charter amendment, and proposed and helped get on the ballot Colorado’s first local community bill of rights (Lafayette’s Community Bill of Rights and Obligations).

Now on her second term as a national co-chair of the Green Party of the United States, Andrea Mérida Cuéllar is a Denver-based education and social justice activist who has served her community in many ways, from student leadership to service in the U.S. Army to service as a member of the Denver Board of Education, the city's first Green elected to public office.

Ms. Mérida Cuéllar is also co-chair of the Green Party of Colorado.

During her tenure as a member of the Denver school board, Ms. Mérida Cuéllar was the prime driver of a landmark civil rights ruling regarding English learners in the Denver Public Schools. She is active in Denver's #BlackLivesMatter movement and steering committee member of 15Now Colorado.

More GreenStream broadcasts and Green Party videos can be viewed on the party's video page.