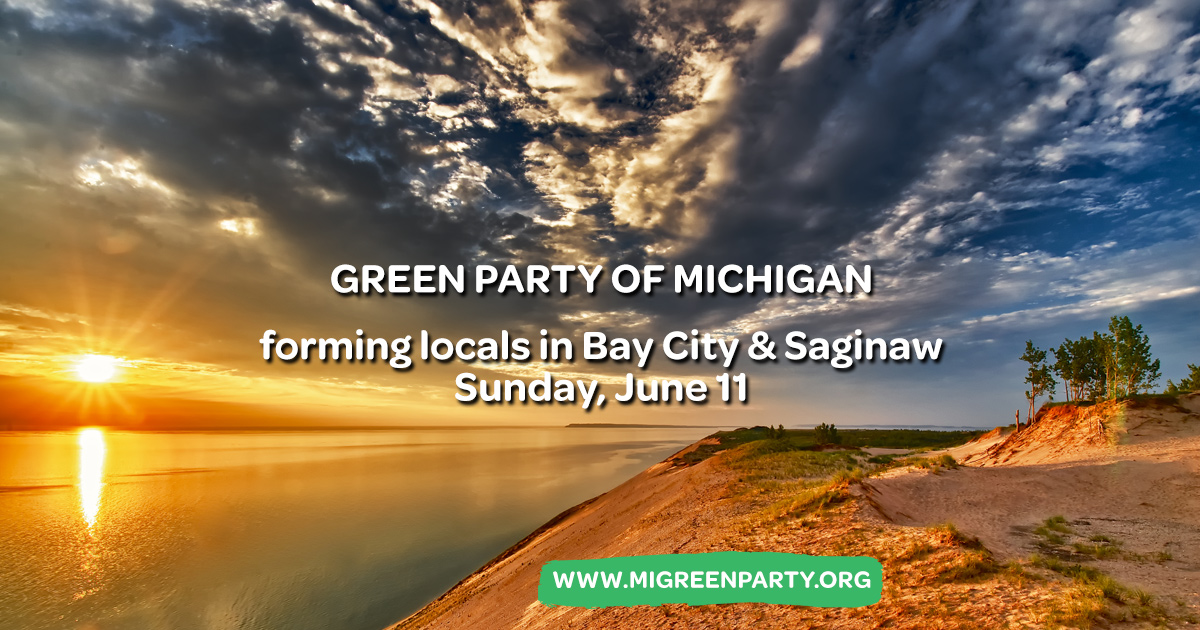 BAY CITY, MI -- The Green Party of Michigan is forming groups in Bay City and Saginaw.

Sherry A. Wells, chairwoman of the Green Party of Michigan, will attend both meetings as part of a "Listening Tour" of Green Party members across the state.

"Each county has its own unique, individual issues that voters want to have addressed," Wells said. "We want to have the opportunity to hear more about what Michiganders are concerned about on a local level. These meetings are an opportunity for residents to voice those concerns."

At the meetings, the group will address potential candidates interested in running for office. Saginaw resident Jordan Salvi was the party's Fourth Congressional District candidate for the U.S. House of Representatives in 2016.

Wells expects more people in the area who identify with the Green Party and want a Green New Deal will run for election in 2018.

"At this time, we have enough members here to form a good organizational base," Wells said. "There is an increased level of support for our party and its candidates, particularly on social media. New local groups are forming all over the state."

Wells is a former candidate for the State Board of Education. She said local groups are the foundation of the Green Party of Michigan.

"Voters are excited to be presented with an alternative in today's political climate," she said. "Our local groups are growing throughout the state, bringing people together to work on important issues and providing support for Green candidates."

According to the party's website, its four pillars are grassroots democracy, social justice, ecological wisdom and nonviolence. Tom Mair was elected Grand Traverse County Commissioner last year as a member of the Green Party, while Korie Blyveis was elected Newburg Township Clerk.

Three other Green Party candidates won elections as parks commissioners in 2016. The Green Party of Michigan did not win at the state or federal levels last year.

Wells told The Bay City Times-MLive.com that membership for the party has about doubled from last year, although she could not give an exact figure. She said people are saying the two-party system isn't working and the Green Party has progressive people running from the ground up.

Jill Stein, the 2016 Green Party presidential nominee, garnered about 51,000 votes in Michigan. Wells received more than 124,000 votes during her bid for State Board of Education.

"We have an alternative for people that more and more people are finding out about because they're looking for that," Wells said.

Wells said people can join the Green Party of Michigan online. There are no dues required to join, she said.

Matt de Heus is the former chairman of the Bay County Green Party. He ran unsuccessfully for both the U.S. House of Representatives in 2010 and Bay County Commission in 2012. After he pursued business interests following the 2012 loss, he believes the party folded.

While he did run, de Heus received negative letters and feedback. He said he received more of those than donations.

De Heus is not active within the Green Party at this point. He does believe Green Party candidates have an opportunity to be elected at the local level.

"I do believe there are a number of Green voters in the area," de Heus said. "I also believe there is a larger number of people that if they really explored the platform, they would find it aligns more with their values than any of the other ballot-qualified parties."