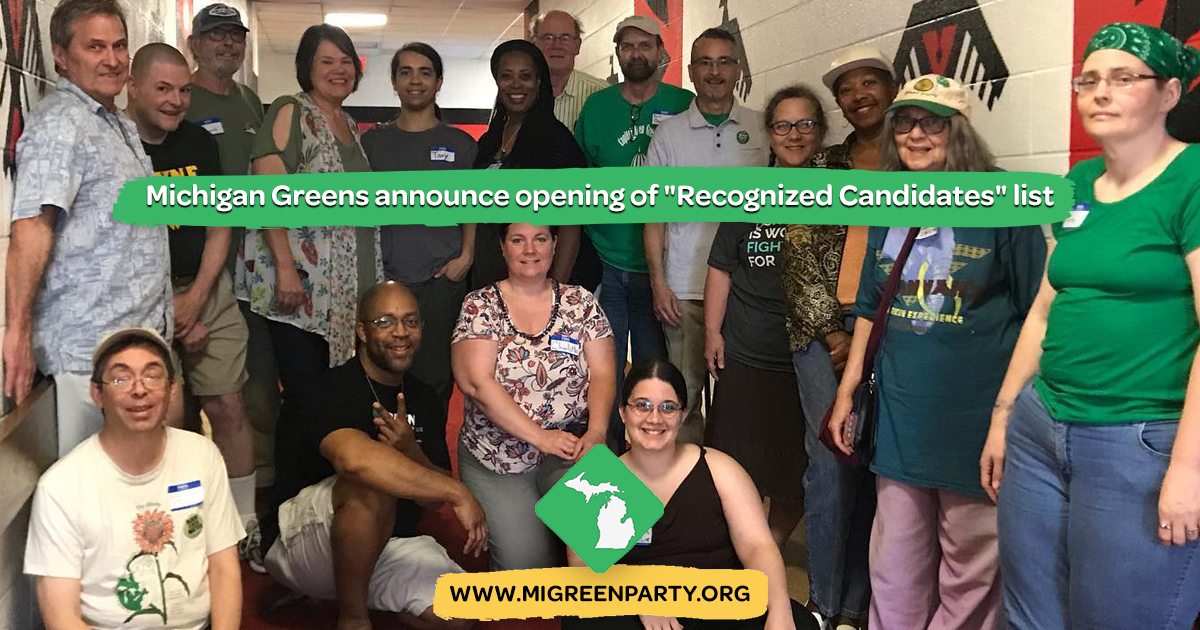 GRAND RAPIDS, MI – Candidates who want to represent the Green Party of Michigan (GPMI) on the November 8 ballot can now qualify to be on a formal list like the ones state and local governments promote for parties included in the August primary.

GPMI has adopted a procedure for candidates to be recognized as seeking the Green nomination for their target offices until the state nominating convention April 23-24 (or a county caucus held sometime between now and the primary).

The steps to qualify as recognized, and the benefits a candidate gets from becoming recognized, are posted on line at the party Website.

As Green candidates meet these qualifications, their campaign contact information will be posted on a "Recognized Candidates" list at the site, and on GPMI social-media pages.

GPMI believes candidates who qualify to be recognized by the party will be just as serious as anyone else – and just as qualified to be supported by voters, covered by the media, and considered by any public-interest groups for their endorsement. (However, all three groups should be aware that Greens do not take PAC money.)

"To be recognized, a candidate will have to show they're ready to run a solid, legitimate Green campaign," notes GPMI Elections Co-ordinator Pro Tem John Anthony La Pietra.

"They'll have to meet or exceed what the laws require them to do to register their candidate committees. They'll answer a GPMI candidate questionnaire, and tell us about their backgrounds and how their views of the issues match up with our Ten Key Values and our platform. And they'll need personal endorsements from other Michigan Greens.

"We'll post their names and campaign contact info online to recognize their efforts – and to let the people, the press, and candidate evaluation committees across Michigan know there's another list of candidates they should be finding out about."

Recognition is not a guarantee of nomination, but brings benefits which may help candidates get nominated. Some will give priority to recognized candidates at the state party convention – though on an impartial basis, La Pietra notes. "No rigging of the nomination process here! Greens believe in Grassroots Democracy, so we make sure it's our participating grassroots members deciding who gets nominated – or whether to nominate anyone at all."

La Pietra says GPMI will maintain and update the list at least until candidates start being nominated. The Green statewide nominating convention will be held April 23-24, just after the deadline for Democrats and Republicans to get on the primary ballot. Others will be nominated, for offices serving only voters within their counties, at county caucuses which may be held anytime until Primary Day August 2.

"If they want to help their respective audiences cast informed ballots, they should jump at the chance."

For more information about the Green Party of Michigan, its actions, and its 2022 platform, please visit: