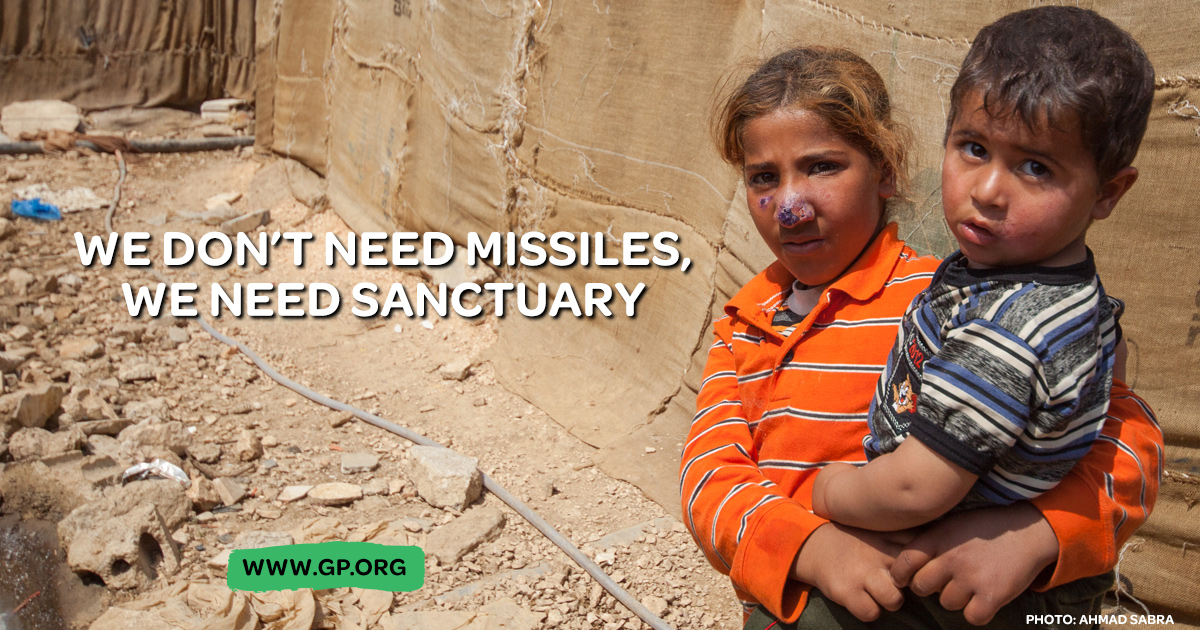 Greens call for halt to U.S. attacks and ongoing overt and covert military intervention in Syria, which will inflict even more civilian casualties and escalate the war in Syria, urge an arms embargo on all sides and an open door for fleeing Syrian civilians

Canadian Prime Minister Justin Trudeau and other leaders have also called for an investigation. Green Party leaders noted that unilateral attacks on another sovereign country that poses no immediate threat to the U.S. violate international law and treaties to which the U.S. is signatory.

The Green Party also calls for the U.S. to admit Syrian civilians, especially children, who are fleeing the war.

Greens said that the strike ordered by President Trump threatens to expand the Syrian conflict into a proxy war between the U.S. and Russia in the context of a new Cold War between the two powers. The CIA and Saudi Arabia, a U.S. ally, have supplied funding and weapons to Syrian rebel groups that have strengthened ISIL and al-Qaeda, even while the U.S. continues to bomb the latters' strongholds in Iraq.

Green Party leaders asserted that the investigation and emergency negotiations with Russia, Iran, and all others involved or with an interest in the Syrian war are necessary to stop further bloodshed and prevent a wider regional or global military confrontation.

The Green Party supports an international arms embargo on all sides, which is only possible through multilateral negotiation. The party refutes bipartisan claims that military solutions can bring peace and stability.

In calling for a halt to U.S. military action, the Green Party in no way defends either the Assad government or rebel forces, which are responsible for the slaughter, maiming, and displacement of hundreds of thousands of civilians. The party supports an international investigation into war crimes on all sides. Greens warned that U.S. military action will only lead to more mass civilian casualties, as shown by U.S. invasions and attacks in Iraq, Afghanistan, Libya, and other Muslim countries since 2001.

The Green Party sharply criticized major media and warhawk Democrats who are cheering the missile strikes. Mr. Trump's pre-attack friendly stance towards Russia -- opposed by Democrats enthusiastic for a new Cold War -- offered a chance for cooperation between Washington and Moscow. The missile strikes are likely to have scuttled that chance.

Greens said that Trump Administration's belligerence risks a new era of reckless warfare comparable to -- or worse than -- President George W. Bush's disastrous first term. Since his inauguration and despite his protestations of sympathy for civilians, including children, killed in the Idlib assault, Mr. Trump has ordered raids in Yemen and air assaults on Mosul and a mosque near Aleppo that have killed scores of civilians. These crimes are compounded by his administration's anti-Muslim immigration proposals and deportations, especially targeting Syrians fleeing their country's civil war.

The Green Party calls for a revived mass antiwar movement that opposes military action that threatens the lives of civilians, that rejects wars for oil and other resources and for U.S. political and economic domination, and that recognizes a dangerous continuity in the Bush, Obama, and Trump administrations' war policies. These same policies have ignited rage against the U.S. and may lead to new retaliatory violence against Americans.

The party also urges deep cuts in defense spending (except for veterans' services) and dismantling of the military-industrial complex, noting that the U.S. military budget is ten times greater than Russia's and that the U.S. faces no threat from other countries.