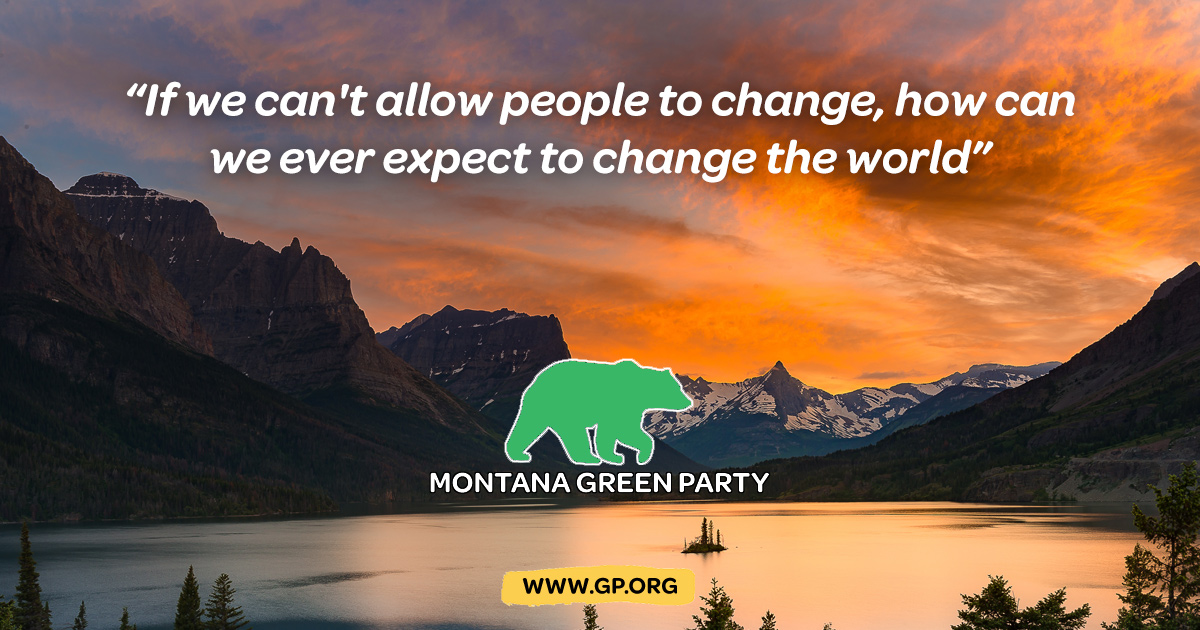 First of all, yes we have in fact repeatedly responded to this nonsense! If anyone from Mr. Pakman’ s show had bothered to make any effort to contact anyone from the Montana Green Party we would have gladly answered all his questions. This is biased media at its worst, but I should suppose we should be flattered for the 6 min piece, huh?

Yes, Tim Adams worked for the Republicans for about six months as a data analyst. To be fair I was a Democratic chair for far longer than Tim was employed by the Republicans. Also Tim has run as a Libertarian, regularly donated to Democrats, and worked with various groups on issues including medical marijuana and LGBTQ rights. It hardly seems fair to presume to know what someone stands for based on such an incomplete picture of who they are, or without reaching out to them for that matter.

As for the “anti-tax” group, yes, he is also internal in this group which was formed in response to the fact that the money from this particular tax, the 6-Mill Levy which has been renewed regular intervals to fund the state university system since 1948 (LR 128), has, in recent years, been being spent more on administrative salary hikes than on making education affordable for Montana students. https://nohightaxesmt.ruck.us/ This group is non partisan not “right wing”, beyond of course the assumption that only a Republican would ever question the legitimacy of a tax. The Montana Green Party has not taken a position on this issue, but again its on fair to assume that just because he is questioning the legitimacy of this tax does not, in and of itself, make him not Green.

The problem is that the media likes to paint us into these boxes by assuming they know what we Greens stand for. The beauty of the bottom up organization of the Green Party of the United States is that each state party gets to articulate what they stand for independently of the national organization. Montana Greens, like most Montanan’s, are highly independent with a unique perspective on things. We are critical thinkers who have come to understand that, if we are to take our country back from the two-party corporate oligarchy that cares so much about profit that it is willing to continue to exploit this planet and its people to the brink of extinction, we must set our differences aside and work together to bring about the third party political revolution. We are an inclusive grassroots organization that welcomes home, with open arms, any of our fellow Montanan’s who feel the same. Regardless of their prior political affiliations. If we can’t allow people to change, how can we ever expect to change the world.

If Mr. Pakman cares to take the time to better understand the actuality of the situation here in Montana I would love to come on his show an discuss. I’m sure we could get Tim to do so as well.

The brief mention towards the end of Steve (no name and other candidates omitted completely), his victory, and our being kicked of the ballot because we “didn’t get enough signature” fails to even mention that it was the state Democratic Party and their high powered counsel that we hear they may have spent as much as $750,000 (no collaborative evidence, hear say through state AG’s office) in coalition with a primarily Democratically appointed state Supreme Court, that made the determination that around 80 of the 7300+ validated signatures were invalid, leaving us just 18 signatures shy of our ballot access. They didn’t even consider mentioning our pending federal suite or how atrociously unconstitutional Montana’s ballot access laws are.

This is an extremely Democratically biased piece that any journalist looking to report the “whole story” would be ashamed of. Nice plug for RCV there at the end. If they’d asked we’d have told them about how the Montana Green Party is working on a RCV ballot initiative for 2020.