With its first convention in 10 years, Montana's Green Party gets set to take another swing 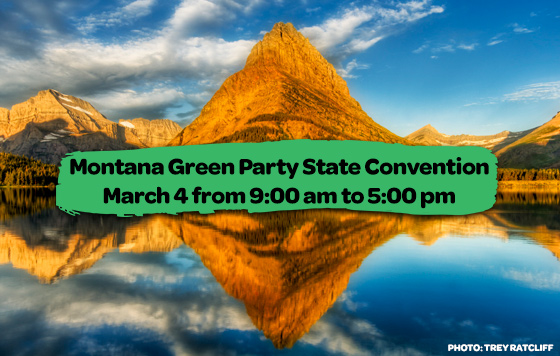 More than 10 years after the Montana Green Party last held a convention, the party meets in Missoula this month with renewed enthusiasm. Party organizer Danielle Breck, who will graduate from the University of Montana this May with a degree in philosophy, says that in light of last year's election, she and other Greens feel they have more to offer progressives than Democrats do.

"We think it's super-important that we have the progressive voice be heard," Breck says. "Even Democrats that have made it into the state Legislature, they're moderate, and we don't really feel like they represent us and our ideals."

Breck says anyone is welcome to join the convention's workshops and discussion of a new party platform, which hasn't been updated since 2007. She says she expects military drones and government surveillance to be hot topics. Breck is also excited that 2016 Green Party presidential candidate Jill Stein will Skype into the conference for a Q&A session.

But despite Stein's top billing, Breck says the party's sights are set on local races. For too long, she says, third parties have invested too much attention on the top of the ticket. She wants to see Greens start from the bottom by targeting the state legislature and nonpartisan local races—even city council and school board seats.

"Absolutely, that's where we need to work right now," Breck says. "National campaigns are really difficult, they take a lot of money. But statewide, Montana's got excited progressives right now, and lots of excited people wanting to make change."

Breck says it's unlikely that the Green Party will front a candidate for this spring's special election to replace Rep. Ryan Zinke, who was confirmed March 1 as Secretary of the Interior. Instead, she says, the party is preparing for next year's midterm races. The Green Party already has its first 2018 candidate in Jordan Roether, a 24-year-old Great Falls resident who says he intends to file to run for the state House. Roether cites Vermont Sen. Bernie Sanders' bid for president as his first big political awakening.

"I'd rather take my energy I've been putting toward causes and put that on the state level to get change made," Roether says.

In the past, Green Party candidates have faced uphill battles in local races. Polson's Cheryl Wolfe ran as a Green Party candidate for House District 11 in 2010, losing to Republican Janna Taylor by more than 2,000 votes. Wolfe tried again in 2012 and didn't garner enough signatures to get on the ballot.

"[The two-party system] is a difficult system to overcome," Wolfe says. "But what gives me hope is the fact that we have never, and will never, take corporate donations."