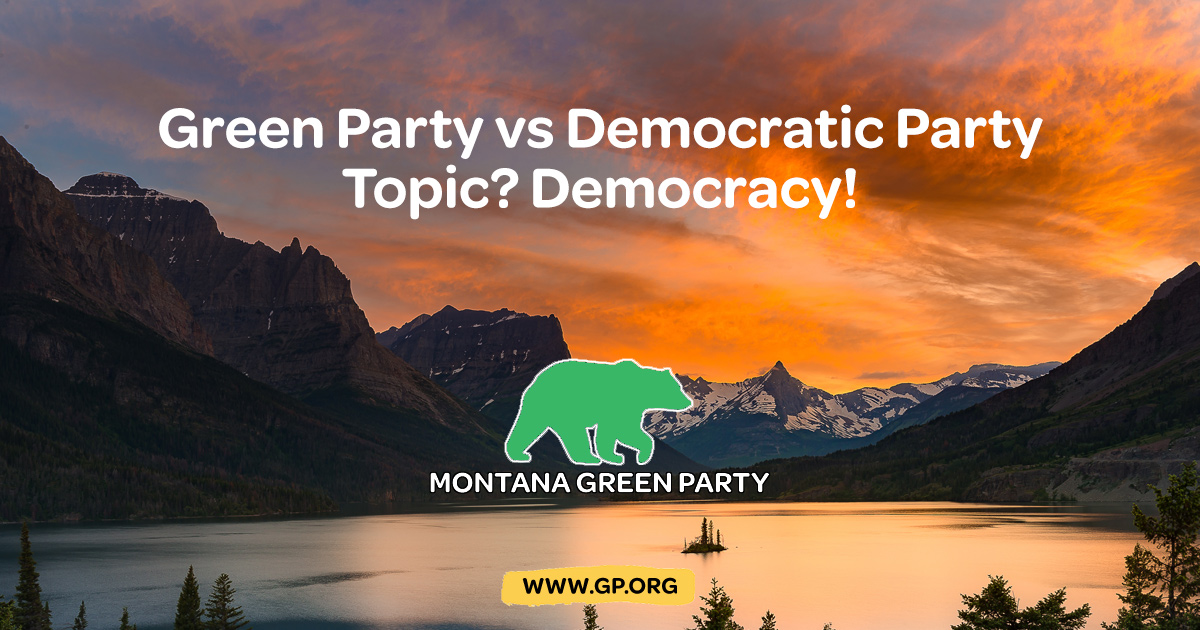 (HELENA, MT) –  On Tuesday, Missoula's Quinten M. Rhoads will be in District Court in Helena, at 1:30pm, to represent the Montana Green Party (MTGP) and those who signed petitions to place the MTGP on the 2018 election ballot. Rhoads will face the international law firm of Perkins & Coie representing the Montana Democratic Party (MDP) with Peter Meloy of Helena. MTGP coordinator Dani Breck stated, "I did an internet search on the out-of-state firm, Perkins & Coie; for the Montana Dems to bring in this behemoth that has represented the DNC & HRC in attempt to silence Montanans' voices does not seem very 'democratic' or 'American' for that matter."

PRESS IS ASKED TO ATTEND

In attempt to disqualify enough signatures to get the Green Party removed from the ballots, the Democrats filed suit against the Secretary of State's office, listing the MTGP as "Interested Party". Cheryl Wolfe of Polson, treasurer of the MTGP, is encouraging supporters from across the state to attend the Tuesday hearing in order to defend petition signers rights and voting rights in general. "Montana rules have already made it difficult to get ballot access. We have to gather signatures for each election and that's not easy when many of us work two jobs. Our members have been going through this laborsome process since 2000." MTGP deputy treasurer, Harry Hoving from Billings added, "I feel all voters should have a meaningful voice and ballot access in Montana politics."

Steve Kelly, 2018 Green Party candidate for U.S. Senate from Bozeman, is pleased the MTGP will be represented by a Montana attorney at this important hearing. "The Court has no higher duty than protecting the constitutional rights of individual voters," Kelly, stated Monday. "In fact, I have asked the Court to appoint legal counsel to represent the interests of Montana's individual electors – especially those who, in good faith, signed the Green Party ballot access petition," said Kelly, a long time protector of the Big Sky state.

Adrien Owen Wagner, MTGP candidate from HD15 (covering areas of Heart Butte, Pablo, St. Ignatius, and Browning) is also looking forward to being on the ballot in November. The soon to be teacher stated his concerns: "How can a 'democracy' be expected to be inclusive if 'the People' are being excluded from real choices in candidates? My constituents, including the residents of the Blackfeet and Flathead reservations, deserve to have a choice of 'community over corporation' instead of only 'profit at the expense of the people'. All Montanans deserve to have representation that matches their values not simply be placed in a limiting 'either/or' box."

Breck also commented on the Dem's lawsuit: "This abhorrent move shows how desperate the Democrats are to silence the voices of the Green Party. For an organization that claims to represent "the People" of Montana, the Democratic Party is working in overdrive via an undemocratic attempt to silence Montana Green and Independent voices."

Those supporters who signed the petition are asked to attend the Tuesday 1:30pm hearing at the Helena District Court 228 E St. and to contact Dani at [email protected] before 9PM Monday.