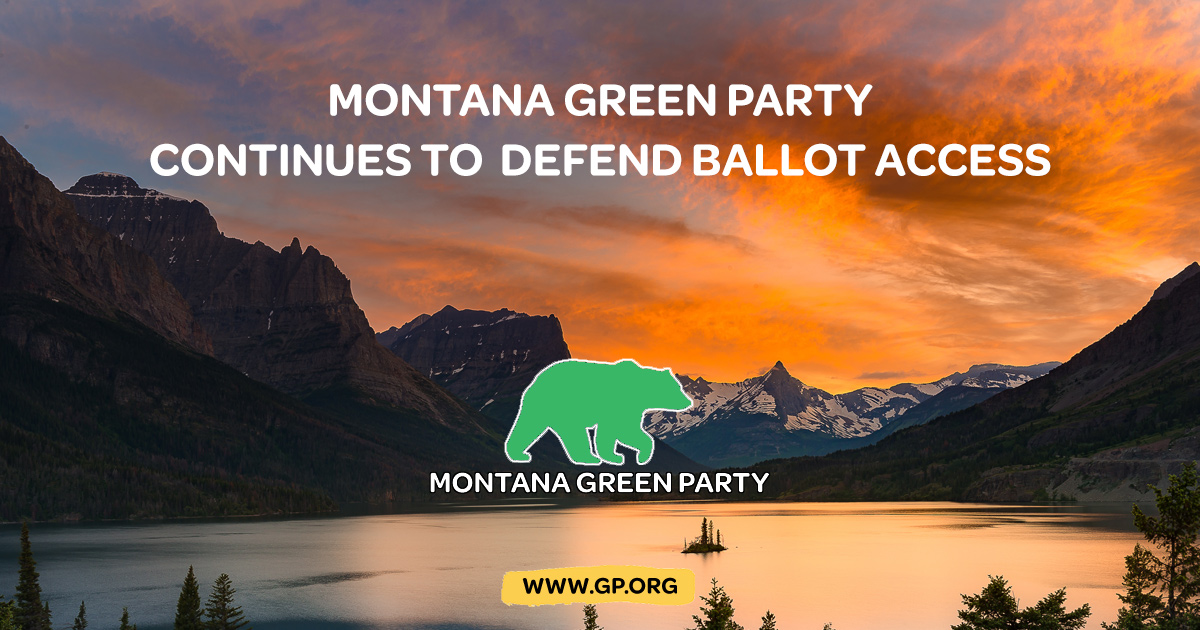 (HELENA, MT) – The Montana Green Party (MTGP) sought to have the ballot access case brought by the Montana Democratic Party (MTDP) moved to federal district court on Monday. This action was taken on the basis of the belief that the case “...is an action involving issues of law arising under the U.S. Constitution.” The motion claims that statute (MCA 13-10-601), regarding ballot access in primary and general election, is unconstitutionally burdensome to third parties.

The MTGP Coordinator Danielle Breck stated that “The Montana Green Party has repeatedly shown, through our various petitioning efforts, that we do, in fact, have the “modicum of voter support” the law requires and that our candidates are not “frivolous,” but rather provide an important alternative to pre-selected, unresponsive, corporate controlled candidates offered by the two-party oligarchy. The state statute on which the plaintiff’s case is based is itself unconstitutional, and it is for this reason we believe this matter should be heard in federal court.”

On Monday afternoon the federal court declined the case, stating it was based solely on Montana law. MTGP respectfully disagrees, but vows to continue to resist the effort to silence its voters.

The Montana Democrats have dedicated immense resources to hire Perkins Coie, one of the most powerful political litigation law firms in the world, to descend on the Montana Green Party with all four feet. They and their agents had been working tirelessly on the case for weeks before the Green Party even heard about it.

MTGP and its small but dedicated legal team seek nothing more than a meaningful opportunity to be heard in the face of overwhelming legal fire power. If they do get a fair chance to put on their case, they are confident they will prevail. All MTGP wants is a fair chance for their voters to participate in Montana’s 2018 elections. Surely the Montana Democrats have nothing to fear from a free and open election.